MacOS Dock is Visible when Switching to Fullscreen Renoise

When in fullscreen mode, Renoise for MacOS will sometimes draw the Dock on top of itself, obstructing everything underneath, including some controls.

This main symptom is either permanent, in that the dock never disappears on its own, or temporary, in that the Dock will automatically slide away after 1-2 seconds. What determines its persistence is whether and how the Renoise app is switched to from another app or space.

It’s important to note that showing the Dock in either sense is contrary to expected behavior of fullscreen MacOS apps, which is to not display the Dock after entering fullscreen mode at all except when summoning it deliberately by pulling the mouse cursor below the screen continuously for a period of time.

This is an issue I’ve previously reported in lesser detail and subsequently closed, but it seems to still be present in the current release and appears to derive from Renoise’s fullscreen mode having been implemented in a non-standard way.

Speculation:
Mission Control labels the space occupied by Renoise “Desktop”. This, combined with the behavior surrounding non-fullscreen apps described above, seems to indicate that Renoise is not assigned its own space when put into fullscreen mode, but is instead drawn inside the default desktop space (Desktop) in a non-standard fullscreen mode which, while in focus, attempts to suppress the Dock. 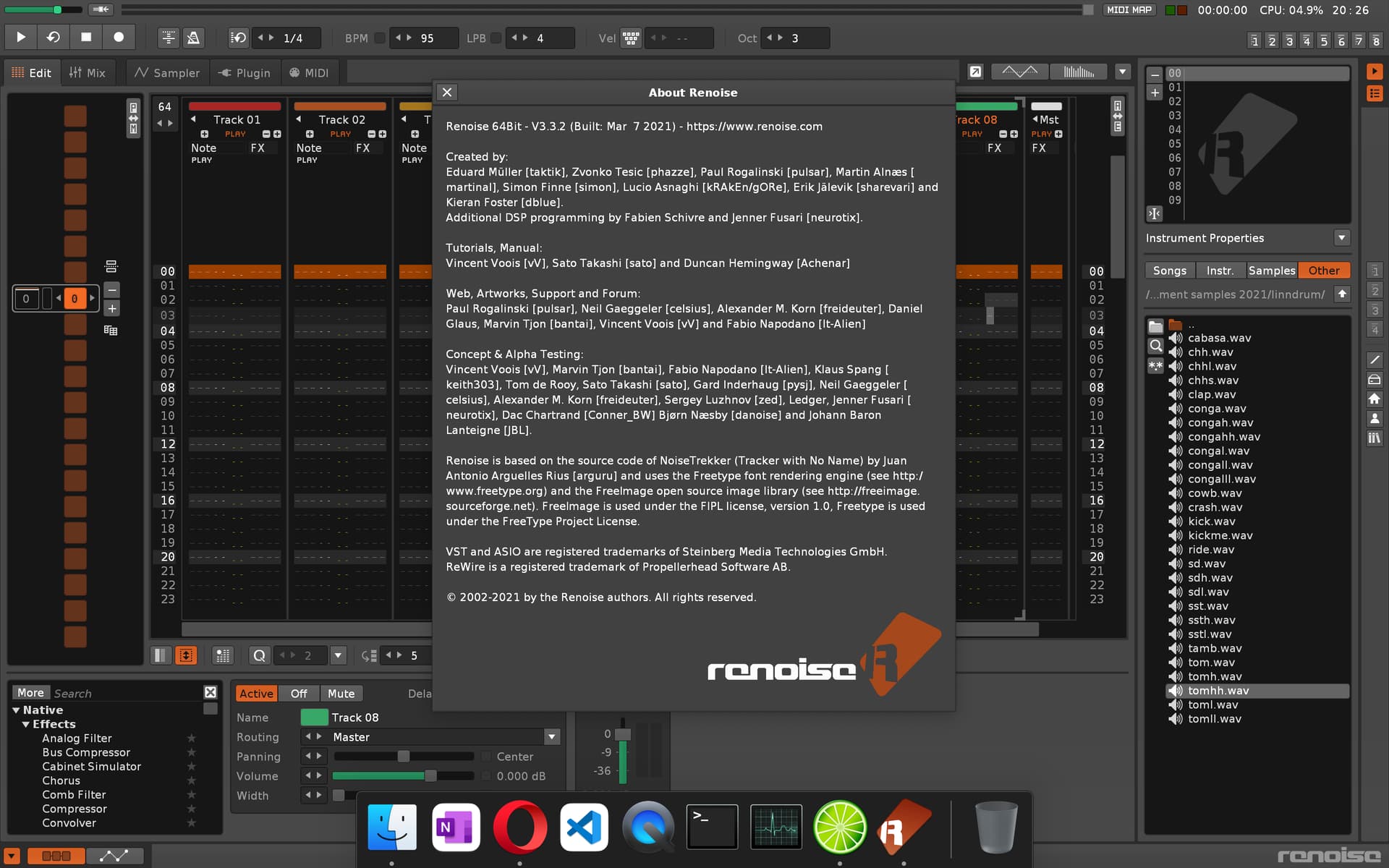 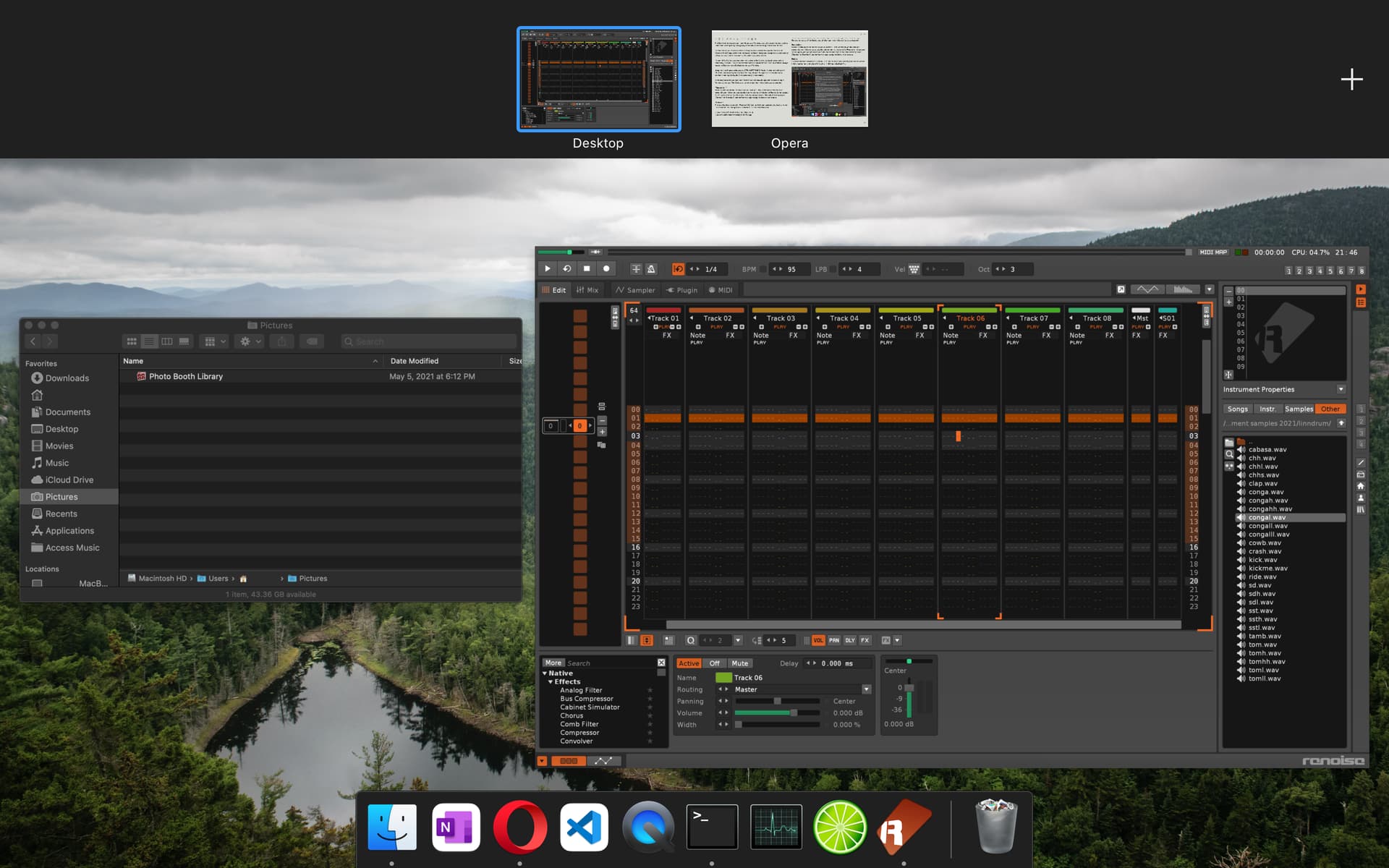 Workaround:
Dragging an instance of Renoise into its own space inside Mission Control will enter Renoise into fullscreen mode without the main symptom described at the top of this post, presenting a limited workaround.

The Spaces bar at the top of the Mission Control window contains thumbnails of each desktop space and each window that is in full screen or Split View.

If you drag a window onto an empty area of the Spaces bar, that window opens in full screen in its own new space

Using this workaround, Renoise does not have a working keyboard shortcut for toggling fullscreen mode. The existing shortcut (ALT+ENTER) is still tied to the non-standard fullscreen mode, which remains enabled when Renoise occupies its own space, but has only undesired effect:

Updated after replicating in Renoise 4.3.1.

So did you set your Dock to auto-hiding? I do not fully understand the steps to reproduce here. In my 10.14.6, I do not have that problem at all, my dock here is hiding as usual under any circmstances. This would indicate a bug in Catalina actually maybe? I would agree that Renoise is not using the “official” fullscreen mode, easily detectable by the annoying extra virtual desktop then (see Bitwig for comparison)…

No, I have not set the Dock to automatically hide.

my dock here is hiding as usual

Does that mean it’s displayed at all? If so, it might at least partially be doing what I’m describing above. Have you tried using the CMD+TAB shortcut to switch between spaces?

This would indicate a bug in Catalina actually maybe?

If it’s Renoise that’s relying on non-standard behavior, then I wouldn’t say so, even if it isn’t an issue in Mojave. I have not run into this with any other apps, let alone ones with conventional full screen modes.

As far as I recall, this was also an issue when I ran Mojave. Maybe you can share your system details?

Does that mean it’s displayed at all? If so, it might at least partially be doing what I’m describing above. Have you tried using the CMD+TAB shortcut to switch between spaces?

Ok, set the dock now to permanently staying. No matter whether I switch apps/screens via cmd-tab or by using the usual trackpad gesture, the dock fades in/out normally so far.

Same in Bitwig, only here the dock already is blending out while the transition animation, this might indicate that Renoise is doing the blending out action itself or so…? Then maybe an additional check for state could fix this?

I use the latest version of Mojave, 10.14.6. Nothing special here. I use a magic trackpad via bluetooth, it’s a workstation.

No matter whether I switch apps/screens via cmd-tab or by using the usual trackpad gesture, the dock fades in/out normally so far.

I use the latest version of Mojave, 10.14.6. Nothing special here. I use a magic trackpad via bluetooth, it’s a workstation.

What hardware are you using—an iMac, a Mac Mini, a Hackintosh?

What are you system specifications (About This Mac)?

Are you using one or more external monitors?

Sorry, should have read your post more accurately. Switching to fullscreen Renoise from fullscreen Bitwig using cmd-tab produces the problem like you described it (with Dock set to “stay permanently”). Same happens with desktop switching gesture, if the switching forth and back is faster than the switching-animation takes.
But here, I can at least fix this by switching one time to a Finder desktop for some seconds.

Not at all. I edited the post before I responded to you yesterday, so that’s on me if it wasn’t clear enough when I first described it.

Thank you for taking the time to replicate the bug.

Renoise has recently been updated, most recently to version 4.3.1. If anyone would like to replicate the bug, they’re more than welcome to report back here.