Hey guys,
i am pretty new to renoise. Recently i managed to include my Roland Cloud Effects into Renoise.
Normally, after building sequences inside the plugin, you drag and drop your new pattern (“variation” in TB303) into a channel. At least, that’s how i am understanding the Plugin. The data-transfer works perfectly fine in Acid Music Studio, for example. Its really easy to create patterns - pull them into the timeline - arrange or rearrange them with other patterns, automate knobs etc…

With renoise however, the drag and drop function seems broken. The data included seems to be uncorrelated Salad - with no connection to the Plugin Whatsoever. Moreover, renoise creates a “Midi-Instrument” which is completely empty, during the drag and drop process. The “uncorrelated garbage” MIDI data is referenced to this new MIDI-Instrument. And yes: The 303 gets triggered “ON” - but cannot be controlled via Renoise - only via the plugin itself.

It is not possible to control the plugin -directly- with Renoise. The same applies to other Plugins e.g. the 808. It uses a similar type of sequencer - and you get the same uncorrelated garbage, when pulling patterns from the Plugin into Channels in Renoise.

That is a serious bug for me. I am not sure, if i am missing something. Having a plugin, you can’t control with the main program is quite pointless. And yes: I am aware of the Audio (=Wave) Downmix of Plugins - but this is not what i want. I do not want to sample my plugin-sounds - i want to control the plugin directly - treating the Plugin as a device.

Theres no midi drag and drop (Works different, someone may come along and explain properly) however, you can just trigger that pattern to play with a note command in the pattern editor. May have to change the sync settings in your plugin. 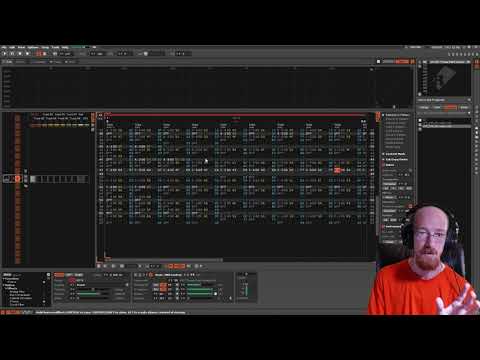 Yeah MIDI import has been broken since 3.4.0. Everything, including drag & drop, works in 3.3.2 and older, it was always a bit messy and janky tho.

The drag en drop worked fine for me to get the Roland Cloud 303 operational. However, the pattern is adopted, but via Renoise you have no control over, for example, ‘tuning’, ‘cut off freq’, ‘resonance’ et cetera. These are taken from the Roland 303, while I want to control it from Renoise, as can also be done with the default effects in Renoise. Now it seems that per adjustment in effect I have to load a different Roland 303 VST. This must be possible, right?

have you tried the instrument MIDI control device in the mixer fx section? Usually that device allows you to control all available vst params

but via Renoise you have no control over, for example, ‘tuning’, ‘cut off freq’, ‘resonance’ et cetera.

If you want to control/midi-map/automate vsti’s parameters, you use an ‘Instr. Automation’ meta device;

Thanks for the tip! Just had a quick look and it seems to work for the Roland Cloud TB-303. Now I just need to figure out how to automate it, but I think that’s a standard so I’ll have to find it somewhere with an instruction on Youtube. Then I can put together a nice fat acid loop.

Now I just need to figure out how to automate it Thanks again: that worked out fine for me

By the way, something is not quite right when I want to copy the patterns from the Roland Cloud TR-909 into Renoise. Instruments such as the bass, the hi-hat and snare drum are put together in one line instead separately. As a result, a number of instruments do not transfer from the pattern of the 909 (only a few). Also, a number of effects do not transfer from the TR-909. My temporary solution is that I drag a pattern from the 909 per instrument (by removing others). So 1 for the bass, 1 for the hi-hat et cetera. Is this a bug, or is there a smarter/faster way to do this?

Finally, it seems that my bass line from the Roland TR-909 and the Roland TB-303 influence each other: they push each other away a bit. How can I properly match them in Renoise so that they continue to sound clear other than making the bass less loud. Because I want a fat hard bass. Thank you again.

something is not quite right when I want to copy the patterns from the Roland Cloud TR-909 into Renoise.

Not sure what you mean with copying patterns into Renoise, not familiar with the plugin? I guess you’re triggering the vsti using note events in Renoises pattern editor and different sounds in the plugin cut each other off? Perhaps this is a case where you need to use aliasses (Plugin - Renoise User Manual) in Renoise, or set-up audio routing in the plugin isntrument properties (Plugin - Renoise User Manual)?

At the moment I’m at work, so I’ll clarify the situation with some pictures during the day/ evening.

By the way, what I mean by the Roland TR-909 and TB-303 pushing each other away is that I’m looking for a filter/effect that ensures that, for example, the low and/or mid tones integrate well with each other. So suppose the 909 is in track 1 and the 303 is in track 2 that there is a filter/effect that mixes them well together. There must be something like that, right?

What I mean is the following:
[A]

[B]
The other thing is that I have a track TR-909 with only a bass and a track 303 with the acid loop. However, I like to use a nice fat hard (gabber) bass. But how do I keep them sounding clear when I play them both? Surely there must be some sort of mixer for that that can control low and middle tones? 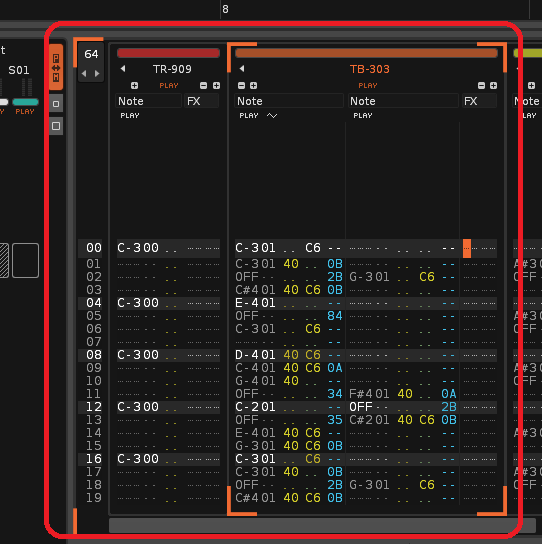 Yeah that’s what i meant when I said it doesn’t work in 3.4, it only imports the first note of anything polyphonic.

By the way, what I mean by the Roland TR-909 and TB-303 pushing each other away is that I’m looking for a filter/effect that ensures that…

Are all these Roland machines contained in one plugin a la Reason rack device or are all of these separate vsti plugins? If all in one plugin, doesn’t Roland offer ways to mix the different units, levelling, panning, eq’ing, compressing? If separate, of course you can use native dsp devices or vsts to mix and process the sounds until it sounds right.

Btw thanks for the screenshots, makes it a lot more clear. I didn’t know you could drag midi patterns from plugins straight to the pattern editor. Does it matter, change anything if you expand a Renoise track beforehand so it has sufficient channels, then drag the pattern over to it, or does it always crop the input in one? Expand tracks through pressing the + icon; 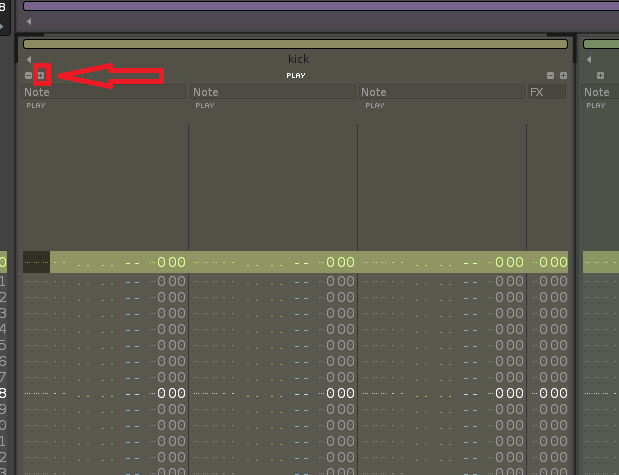 I think Renoises midi import in general is very archaic and needs work, if it is a bug introduced in the latest version / it worked before, please submit a bug report.

Surely this has to be done differently, something more efficient? Or does this possibility not exist and it means a lot of dragging for me.

I think the latter unfortunately. I see you use the same plugin across different tracks in an above screenshot (Open Hat, closed Hat, Clap), I think this can cause issues when you put vsts in these particular tracks trying to process the different elements of the beat. When you play the beat, do the scopes in Renoise show audio in one track or all 3?

[A]
When pattern A is dragged from the TR-909, it cannot be dragged into a track of Renoise (not in the ‘edit’ tab). In short, expanding a track in Renoise makes no sense. Pattern A is added as an import MIDI file.

Then an extra pattern in Renoise has been added with Pattern A from the TR-909. I then have to change the adopted Pattern A from 03 to 02 in terms of instrumentation to control the TR-909 and have sound. If I leave instrument 03, I hear nothing. In short, I suspect a bug @vannoi ? I don’t know if the version before 3.4 supported this.

[B]
By the way, I haven’t encountered a problem yet by placing the open hat, closed hat and clap in a separate track. Incidentally, I noticed that if I put a clap and a snare drum in a separate track and I play them simultaneously in a pattern in Renoise, they are seen as 1, whereby a track (the clap) no longer has a scope. But I can hear both. I also placed them in a separate track because I want to use different effects. I think an effect can only be applied to an entire track and can’t you apply different effects for different instruments within a track? I also use a separate TR-909 for the bass, because I applied such an effect that it apparently has an effect on the open hat, closed hat et cetera.

What is special is that in terms of settings in Renoise the TR-909 (second) is on channel 1, while in reality this is not the case. In short, even if the settings are not correct in a number of areas, I still get sound out of it through detours.

[C]
Incidentally, the TR-909 and the TB-303 are separate VST’s. Maybe there’s a way to mix them out properly, but I haven’t found that out yet. Do you have any tips regarding VST’s that can mix out well?

Yeah that’s what i meant when I said it doesn’t work in 3.4, it only imports the first note of anything polyphonic.

Draging a midi file from a VST into Renoise. Always worked.