Midi Drum Pattern - Is it possible to record in different tracks? [Noob]

Hey, so I am wondering if it is possible to record from midi drumpad to different tracks during one recording?

For instance having Kicks in Track 1. Snares on Track 2. Hi-hat in track 3.

Or do I have to program the drums manually by copying and pasting each drum to its respective track?

I hope this does make sense. Thank for your time.

Two things, not sure how well they work for all cases.

There’s a tool that will split a single track into multiple tracks based on assorted properties: https://www.renoise.com/tools/split-into-separate-tracks

You can also record to different tracks right from the start if your drum-pad can be set to send each pad on a different channel. You can the create separate instruments that a) only listen for MIDI on a given channel, and b) are coupled to a specific track.

I did this just now with my Akai MPK mini. First I set up two instruments (both using the same drum kit, bit you can use any instrument , I picked the same for ease of testing).

On the first instrument I set the MIDI input to the MPK on ch 1, and coupled the instrument to track 1.

On the second instrument set the MIDI input to the MPK on ch 2, and coupled the instrument to track 2.

I also programmed the MPK to have the pas use ch 2 and the keyboard channel 1. (The MPK mini only gives channel options for the pads as a whole and the keys as a whole.)

I would think that if you are using the same instrument for each channel assignment like this you might just as well use the track-splitting tool. Seems like less work. If you want each channel to apply to a different instrument altogether, while playing, then channel/track assignment might be better.

I think the easiest solution without using any tool is to use each sound (or groups of sounds) on different instruments, which together make up your entire drum kit.

On the other hand, to do this from the same instrument, I use my PRE tool. With the Chord Builder you can easily divide the note ranges into up to 16 tracks. You can record each range of notes on adjacent tracks: 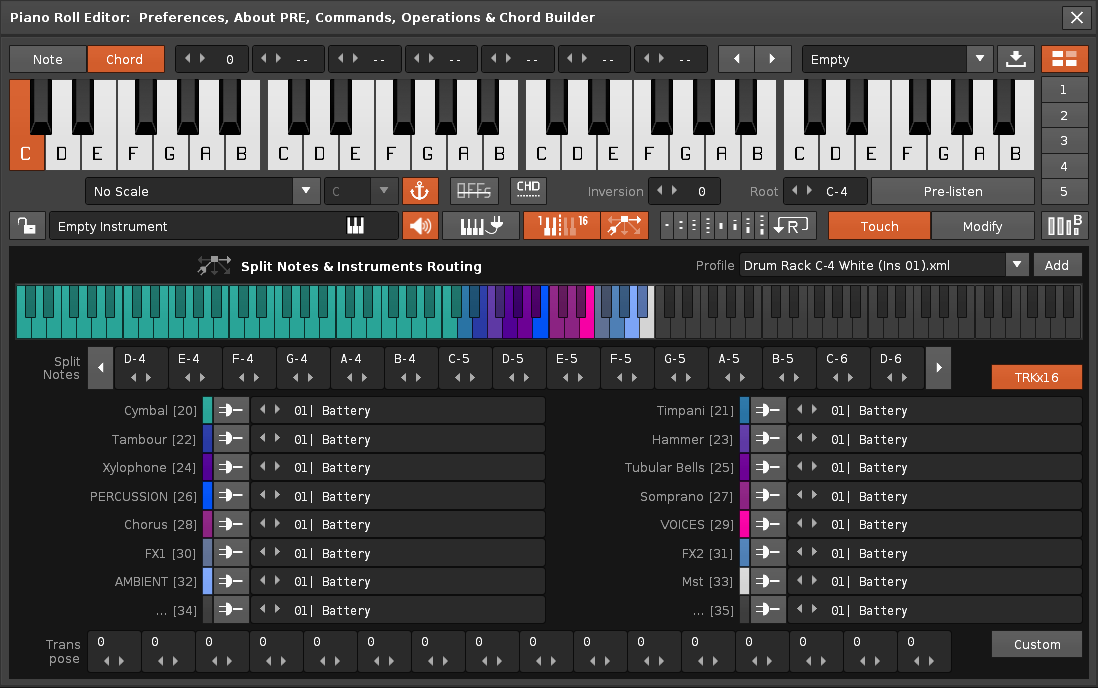 This is somewhat more complex, because it involves learning how to use an external LUA tool.