So I got myself an Octatrack recently, and I’ve noticed that when I save something from Renoise in the waveform editor, it automatically saves it as a 32 bit wav, regardless of if you adjust the sample format to be a different bit depth. This is a big issue since the Octatrack only takes 16 and 24 bit samples. So as a work around, I tried using file>render song to disk >save selection from pattern. And that does in fact work, but A: It’s not very precise for things that aren’t loops, and B:Even for things that are loops, if it’s not a perfect number of beats in length, you can’t measure it very precisely in the waveform editor, because there is no option to have the time rulers on the top and bottom of the waveform display in lines. Only beats, samples, minutes, and its length split into points of reference for the 0Sxx command. And to get around that, the best option available is to literally multiply the current LPB with the number of beats your waveform rule has measured. And only then can you precisely save the sample.

This really makes saving something to reuse it elsewhere a much bigger pain than I feel it should be. I know this seems like a bit of a niche issue, but I can’t imagine the Octatrack is the only place where this can be a problem. It’d be really nice if we could just choose how we want to save a sample from the waveform editor instead of going through that much trouble. On top of that, it seems like we could use more measurements for waveform length. Because even ignoring the issue with measuring in beats and not lines, I can also imagine some scenarios where it would be very annoying to deal with minutes rather than seconds, or seconds rather than milliseconds.

I’ve noticed that when I save something from Renoise in the waveform editor, it automatically saves it as a 32 bit wav, regardless of if you adjust the sample format to be a different bit depth.

Are you sure? It seems to be working just fine here.

Could you walk us through the exact steps to recreate the problem?

Just to be sure: You’re using the “Adjust” function in the waveform editor to change the bit-depth before saving the WAV to disk?

…oh it’s not supposed to work that way? Huh. Well yes, I’m using the adjust function. It’s happened with both the one in the right click menu, and the one next to the “Draw” function. I’ll use the ctr+shift+r to render a selection to a sample, format it to be 24 bit or 16 bit, then save it. It’ll then be incompatible with my OT, and I can also check the files in VLC, and it’ll also tell me they’re 32 bit as well. If you need any other info let me know. Here’s some images to show a further example: 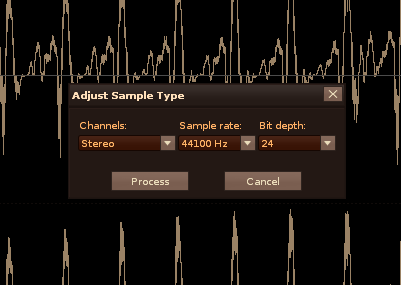 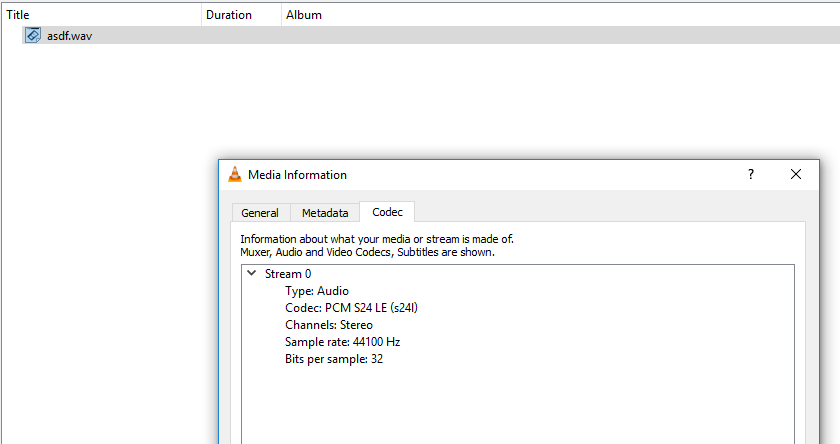 I can also check the files in VLC, and it’ll also tell me they’re 32 bit as well.

This seems to be a rather longstanding bug/quirk with VLC player itself.

VLC pads 24-bit files to 32-bit for playback purposes, which is then reported incorrectly in the media info. (Although you can still see the correct PCM S24 codec.)

I can confirm the same thing here in VLC on Windows 10.

If you load the sample back into Renoise itself then I believe it should have the correct properties.

If I open a 24-bit WAV file saved from Renoise in MPC-HC then it correctly shows 24-bit.

Likewise, other applications such as Wavosaur also load the file correctly.

As for the compatibility issues with your Octatrack, I’m not too sure.

Do you have any other 24-bit WAV samples that definitely work, to compare against the files saved from Renoise?

So I just went and tested it again in my Octatrack, and apparently the file works now there? Maybe it’s something they fixed in the last update… Disregard that suggestion then, sorry. Still think we should have some more ruler options though.