I have enough memory to be able to load templates with hundreds of Kontakt instruments. I’m using all 256 and I could use more.

Huh, I thought 128 was the limit. I’ve limited the number down to about 90 with multi outs and key switching.

Btw, can you comment on stability and CPU usage when you get about say 10-20 Kontakt instances? I had stability issues before I swtiched to multis, but that could just be stupidity and ignorance.

I wonder how this would be implemented. Three digits for instrument numbers? That change won’t be too popular, I guess.

A very simple way would be to change color from 256 until 512. You will have twice as many instruments and keep the 2 digits. Under the hood, you would use 3 digits, up to 512.

However, using more than 255 instruments is too much. Unless it is a joint project of several songs in one. In the pattern editor (or anywhere else) you would only see the 2 digits changed in color.

I would like to hear a song with more than 200 instruments. This scenario would be possible, for example, in orchestral music, with a ton of libraries loaded for different nuances.

It seems to be a representation problem, not per a digits format…

And this blue color would be entered with a secret shortcut, I presume.

If anyone used more than 256 instruments, the instrument column could autoswitch to 3 digits. But to be frank, I wonder if anybody else ever ran out of instrument slots.

And this blue color would be entered with a secret shortcut, I presume.

If anyone used more than 256 instruments, the instrument column could autoswitch to 3 digits.

This would be fine too. But controlling more of the FF in hexadecimal would be another challenge. If this were possible, it would not make sense to use only 2 digits. In 3 digits (decimal) you have up to 1000 instruments (000 to 999). Only Renoise will complain.

Personally, I would prefer the instrument box to be improved (folder management, dragging and grouping into groups), maintaining the 2-digit limit.

meh… double meh. How is that consistent with how anything else in Renoise works and behaves?

meh… double meh. How is that consistent with how anything else in Renoise works and behaves?

Have you tried it (simulated)? There is no problem here. It is feasible. It is a very simple command. CTRL is free when the cursor is in the sub-column of the instrument. And if you don’t want to jump line, press SHIFT too.

Regardless of this, I am not a great advocate of this idea either. For me, 255 instruments are enough. I prefer that they be better classified by groups of instruments.

Have you tried it (simulated)? There is no problem here. It is feasible.

It also doesn’t make any sense UX wise, since nothing else in Renoise works that way. The user experience and integration aspect is as important as the feature itself in a software - if not more. Otherwise it becomes a feature bloat. The Renoise team is so far very consistent in avoiding feature bloats or very bad UX.

Autoswitching I would understand, but I’m pretty confident that someone won’t find it justified enough to add.

In fact, as Renoise is conceived, it would be far fetched to add 3 digits, since nothing in Renoise goes with 3 digits of number in the pattern editor. If this is possible, the following would be to add 3 digits in the amount of the sub-column of effects, and so on.

Anyway do not worry, 3 digits of numbers you will never see them added, I think, because it is not something extraordinarily necessary.

Thinking about this in depth, the only reasonable way to use more than 255 instruments is to use 3 digits in decimal, and always show 3 digits in the sub-column of instruments. That is, forget about hexadecimal notation.

Then you would have 000 to 999 instruments. To spare for anything. Conversion to hexadecimal is not necessary.
If a 2-digit column is used and is enlarged to 3 digits (> 99), in any case they should be decimal values.

This change I would see it as something positive. But once again I return to the instrument box. I don’t know how Renoise would handle with up to 1000 instruments. There would probably be notable performance problems when inserting instruments at the top of the list when you have many instruments already added.

TheDamnChicken Maybe there is limit for 128 instrument plugins. I use multis too and yea, the stability goes down. Kontakt crashes quite frequently, but I still prefer to start tunes with a massive template instead of blank slate. Vienna Ensamble Pro supposed to remedy that, but haven’t tried it yet.

Have you read all my comments in this thread? Especially the last. I guess with 1000 it would be enough (000-999). It would be the most logical step if you want to expand, at least at the programming level. It is my opinion.

And, in the case of using native instruments, the capabilities of each instrument can always be better utilized, especially throughout the percussion section.

On the other hand, it is also a good idea to use templates to avoid overloading each project. Although then you can do cleaning.

How many instruments would be enough for you? 400? Where do you put the limit, in 999? Do you think Renoise, as designed, would hold up well with up to 1000 instruments?

There is a completely transparent way to implement this with effect command. For example a new pan column command (command letter followed by midi channel number) that overrides midi channel of selected instrument. I can live with that and visibly absolutely nothing changes in Renoise. I’d get access to 128 * 16 instruments. The difficulty level of implementing this is near zero.

While we’re at it, the plugin aliasing is in my opinion cumbersome and unnecessary. Simply add midi channel column to the pattern editor, and top of the ui where the velocity is and keep the instruments slots unpolluted. There is no need to alias anything. As is, we have access to more than 256 plugin audio channels but not midi and this is a flawed construct.

I don’t know if I understood everything you said.

You want an effect command that allows you to change the MIDI channel of an concrete instrument’s plugin from the pattern editor. It is this? 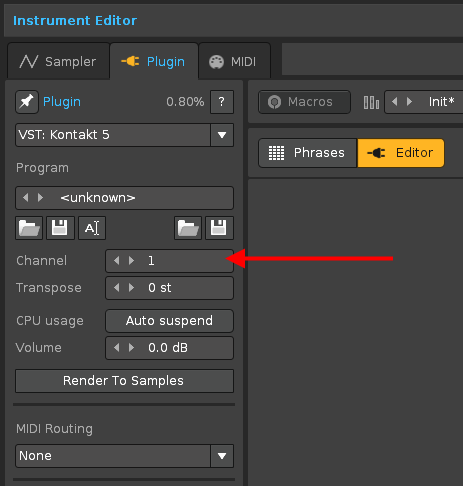 It is a pity that the rapid reproduction of the pattern avoids building tools that do not fail.

But if you only want to change the MIDI channel of the plugin when playing a line in the pattern editor, it is possible to build a tool that does exactly that.

You just have to relate the index of the instrument with the new parameter, and choose a sub-column for the parameter to work. This is not real time, since it depends on the reading of each line in the reproduction.

But just for experimenting, if the playback speed is not very fast, you could get that a tool. I’m sure you’ve already investigated that. Perhaps the most correct thing would be to use an effect column, such as CHxx (CH01 to CH0F in hexadecimal, or CH01 to CH16 in decimal), or something like that.

Does changing the MIDI channel involve some kind of delay in real time? As I do not know if I have understood exactly what you propose, if I am confused, ignore my comment.

By the way, I tell you all this because I am interested in the subject. I also use Kontakt with libraries.