Multiband Send: the best usage (with no doubt)

[PROFESSIONAL TECHNIQUE] With Multiband Send tool you can split audio signal into 3 bands. Bearing this in mind create 3 Send tracks (target busses): MONO, STEREO, SURROUND. On the MONO Track add Stereo Expander effect and set it to Mono (Expand Slider set max to the left), On the SURROUND Track also add Stereo Expander effect and add a little values to the right (expand the stereo field to around 33.334 and add a little surround, something like 2.750)… From your instrument track use Multiband Send tool as the last one in the effects chain, as shown on the image. This is dope method to keep low frequencies strictly in mono, while higher can be more expanded in the stereo panorama field. This prevents phase issues and gives true mono compatibility for the mixes (and yet on the mixing stage!). 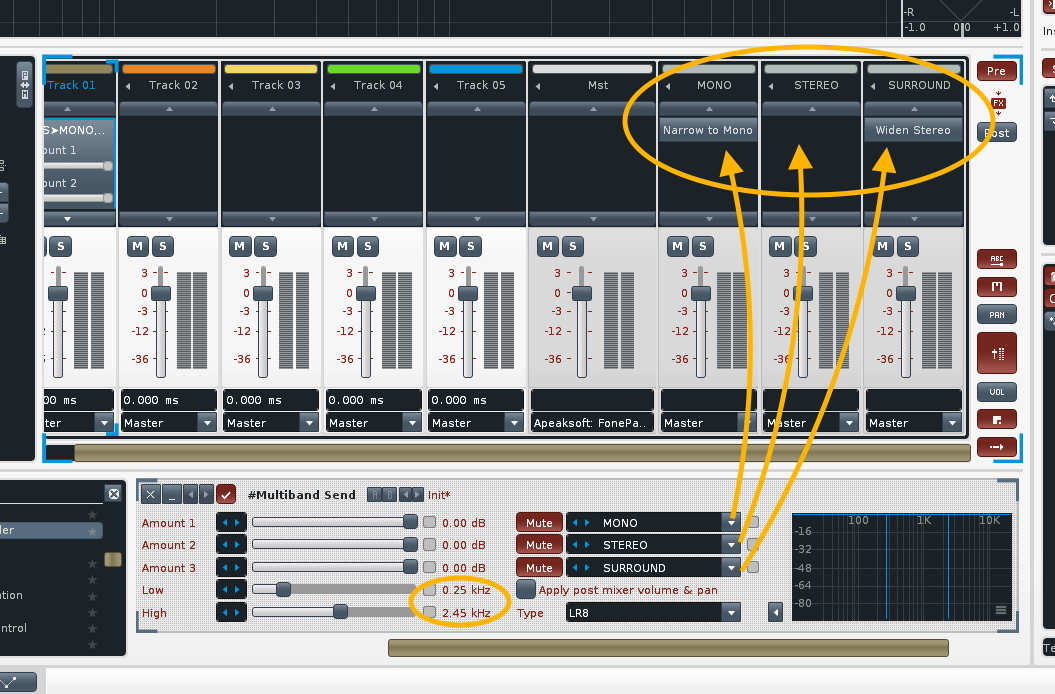 I think there are better techniques for achieve stereo: reverb, panning, layering, delay, and the combination of these. But these are not for lazy people.

Side emphasizing and phase rotation are the poor man’s stereo fxs.

Nope. Putting the lows into mono is the must in every mix. And the widening for highs is not over-expanded, it’s made gently. This technique does allow not only to send 3-bands of audio split, but also it allows to set different ranges for the 3 bands from each instrument separately! So you can have different band ranges for kick, different for bassline, different for vocals etc.! This is really smart, efficient. You can also send two bands to mono, and one to keep normal stereo… or send one band to mono and the rest to widened stereo bus… And in the end: it is not to replace reverbs, panning etc. possibilities. It’s just totally different task: to „glue” frequencies in their adequate places… And it’s not to achieve stereo. It’s more about to achieve THE MONO.

I love the multiband send. It might be one of my favorite devices! This is totally different from how I use multiband sends, but it sounds interesting, although I think I might have trouble mixing the track with this enabled as mentioned above by ffx.

I like using it to separate the sub bass from the mid and top bass, so I can leave my subs unaltered and then only process effects in higher frequencies, for example, if I have a long bass note that goes through modulation over several beats, sometimes I like to send the top bass to distortion without making a huge mess of the sub sound. Other times, I find it useful for sending mids/tops to delays/reverbs, so I can then duck them.

Other times I just use it for weird combinations of effects at different frequencies. Basically, I use the multiband send to pretend I have one of these: Transmutron - Boredbrain Music

Anyone know what ‘Type’ does, or how to use it?

Type determines the crossover softness between the bands. It’s like slopes in filters/EQs…

It defines the filters that are used to isolate each band. “LR” mean linkwitz-riley or ssth like that and is iir filter that will cause phase shifting. The 2/4/8 defines how strong the filters are, so like smooth blending the frequencies or cutting out more sharply. The fir filters are not adding phase shifts, but are probably adding delay and are not as aggressive as the iir filters.

BTW: Adding Compressor to each Send Bus (for the separated bands) will result in extremely dope Multiband Dynamic Processor(!), within 3-band dynamic ranges from each track/instrument sending the split audio signal(!). This is just as same powerful mixing as mastering solution… It’s all on your side what else you will add to each band send bus…

why not just slap a tdr nova on the master in side mode (or any eq which does mid/side) and remove all the stereo from <100hz ? You can widen wherewer you want at the same time.

What color theme is that? I love it!

Quick and simple example of the process: on YouTube… THE IDEA IS TO USE JUST STOCK TOOLS… (and not Waves, iZotope etc ones).

What is your “monitoring” system? (soundcard,speakers.headphones…)

It’s not about impression man. It’s all technical (even when it comes to compatibility with vinyl etc.)… It’s all to show how deep technically stock stuff in Renoise is. JUST TO BE SURE TO HAVE LOW FREQUENCIES IN MONO (mainly!).

Hi, I wasn’t critizing your whole tip, only one detail of it. Not you personally either

Sorry, if it sounded like that. Surely it is a valid tip for newcomers, generally speaking about the multisend. Since a newcomer might read that I just wanted to add some more details about side amplification and phase rotation (the “surround” slider).

Basically if you amplify the side on the top end, the averall sound sum in stereo now will sound brighter (but stays the same in mono mixdown). If you even use the surround slider, the mono mix actually will sound even duller than without. Since it sounds brighter overall in stereo, you will tend to mix less brighter now. The result will be dull mono mix. So if you do this, I would recommend to add this as one of the last “mastering” process steps. But better do not use the stereo tool here, but instead some more sophisticated VST, e.g. some Melda stuff. Don’t waste your time to stick with native fx only.

Another detail about the stereo tool: You actually can use the surround and expand sliders to FIX source material that already has phasing issues. So the other way around, it actually can be very useful.

I added a mono and side check shortcut in my TunedShortcuts tool. It basically a collection of some shortcut tools, which you can setup as you like. No magic involved.

I think there are now more clever monofier tools which somehow can even put the side information into the middle, not just removing it. But I don’t remember names and also don’t know if this even is possible mathematically.

As a general mixing rule for side spreading: If your sound has a good loudness in the mono mix already, but you feel like it could be even more present, then you can use spreading.

Thanks for the video btw.! Why not put it into the first post?

PS: If you want to experiment even further, I did a little tool/script for the free protoplug lua vst plugin (you can script lua dsp with it), which can do a lot more than the stereo tool.