I haven’t found any topics about such a feature, so I decided to create one.
What about multiple keyzones layers for each instrument? I mean the possibility to create several layers that would be played separately depending on the playable MIDI channel or some other value. For example, I have audio samples of a violin separated by velocity and articulation. So I can easily add samples of different velocity to sample, but I can’t add different articulation layers and switch between them in some way. For example, in SFZ we can add such groups and switch between them with modulation wheel, some key switches (C0 - for staccato, C#0 - for tremolo, D0 - for sustain), etc.
What do you think about this? How is it easy to implement with current architecture?

So what about this idea?

Each sample included in the instrument has an associated layer. Each layer has an associated base note, and one or several firing notes (layer width). You can configure the velocity range with the height of the layer. There is no articulation capacity, as far as I know. I have not tried it, but maybe by slightly overlapping the layers vertically, maybe with the modulation the notes could be articulated. I see it very complicated. It is best to use libraries whose samples are well scaled with respect to their velocity. For example, on a piano, that a note has 5 non-overlapping velocity ranges, that is, 5 layers.

Layers may overlap or not. It is normal to stack one on the back of the other or one on top of the other. If you superimpose 2 layers, their 2 associated notes will sound.

One thing you can do is group several samples for each octave. So you can generate at least 10 groups of 12 notes, and each one that corresponds to a specific octave, for example the octave 4.

You can associate an instrument with each MIDI channel, but it is not very practical, unless you have several MIDI controllers and want to control 2 instruments at the same time.

For each instrument, in the MIDI tab you can change the input of the device, the MIDI channel, and the associated range of notes, including assigning a chained track.

There are also tools that allow you to control several instruments from a single controller keyboard at the same time, associating ranges of notes and referring them to specific tracks.

Thanks, Raul. Yeah, I know about all these features, but they’re almost useless in part of cases. The only way I use right now is to make a separate instrument for each articulation layer. But that works not for all orchestral instruments sets, because sometimes the limit of instruments is reached.

Finally, I’ve found the solution. And ironically, I just needed to look at tutorials in the Instruments section. So, it called ‘Midi - Keyswitching’. 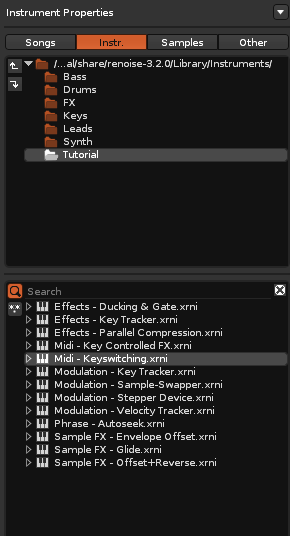