after a half a decade of renoise abstinence, i was looking for a cure for boredom during quarantine and found it in returning to what was once my greatest passion.
i needed something like a deadline so i took the chance on this month’s KVR one synth competition round.
this tune uses 10 instances of u-he’s hive2, no samples allowed as per the usual OSC rules.

this month’s rules also required you to incorporate synth “bird sounds” in any form into your track - just in case you were wondering why somebody would make an intro like this.

Very enjoyable, kind harmonics and good drums you designed. Good to see you in OSC again.

I could listen to this all day non- stop.Great job friend

Sounds really organic and I wondered what analog gear you used until I saw (again) that it’s only Hive.
The Waveform almost looks like your Avatar

thanks everyone for taking a listen and leaving a comment.

@lilith
wow. it’s funny how obvious the similarity becomes once i read your hint.

@Land_of_Bits
if you’re talking about that analoge-esque kind of sound which lilith mentioned, then it’s just some probably pretty generic tips i can give towards that. but i’ll try my best in the following lines.

i was indeed looking for a rather organic / analogue’ish sound, since i thought it would suit the concept i was following with the tune well. i always loved Jon Hopkins “open eye signal” and when i came up with the first ideas of the track (bassline) i instantly had a similar build-up in mind, which is screaming for non-digital / non-stiffness and a certain degree of unpredictable randomness.

when i play the xrns of this song in renoise it will sound different each and every in regard of certain elements, since a lot of parameters are either

for example, the bassline:

Wavetable Position and Filter Env Depth (LP Cutoff) are always slightly altered by a random amount. without me lifting a finger for making it happen. i love that

the actual song-automation is still happening for diverse params in the usual automation-envelope manner ofc: 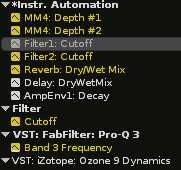 on other instruments, like the pad sound, i did that random stuff for the pitch… pretty much what can be done in other synths with the “drift” function. the amount of detune your instrument will get will always be slightly different with each note triggered.

besides that i also like to tame some prone frequencies (like around 200-500 hz) throughout almost all instrument tracks, to get a less “ringy” (see screenshot below) sound. this depends on the source material ofc, but imo it’s not solely the harsh treble which makes things sound pretty digital… rolling off the high end for hi-hats (or in this case: processed white noise) is pretty much mandatory anyway.

here’s an example of the EQ for the melodic synth which is playing solo at around 2:50:

i also like to add whitenoise to almost everything a lot. i think there hardly is a second in this tune where there is no whitenoise involved. maybe during the break there isn’t. playing with noise always adds that little analogue-touch, even if don’t overdo or abuse it as much as i did for the lack of real sampled percussions.
just make sure to EQ the harshness out of it.

not sure if any of the above unconstructive jabber helps, but that’s all i can think of for the moment.

thanks a lot for the detailed response <3

““i also like to add whitenoise to almost everything a lot. i think there hardly is a second in this tune where there is no whitenoise involved””