Just thought a nice idea might be to be able to name cells (i.e. track in pattern) in the pattern matrix.

The names could be shown in the pattern name slots i.e. 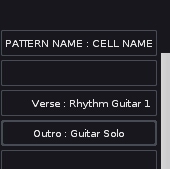 [In practice if you were in verse in this picture the Guitar solo in the pattern below may not be shown? just left for illustration, though I see maybe this could have it`s uses in identifying unique/ cloned cells?]

so in the picture if you are in the Verse pattern, the Rhythm Guitar 1 label changes (to drum fill for example) as you move across cells/ tracks to whatever you have named them.

The same could be done with track names in the pattern editor with each track correspondingly. Though in this case you would have track name followed by track in pattern name (i.e. cell)

Also if the cell is repeated the name could have by default the infinity sign added. This would complement the matrix notation.