Since I’ve sold a lot of my studiogear I just realised I need a new midicontroller.

Both are under 300€, so the price is not important. But I really need your opinions on these machines.

I have not got my hands on the akai, but all other akai-gear I have tried has been rock solid. And As i know the novation remote sl25 is not that solid imo. Feels pretty plastic fantastic…

How are the drumpads work in renose? The pads on the novation feels not that good.

The one thing that speaks or the novation is the amount of controllers. Theres alot of knobs and buttons, but I’m still a little more for tha Akai, as it seems more well buildt. + It has as much controllers I need…

If you have any experience of any of these controllers, please tell me. 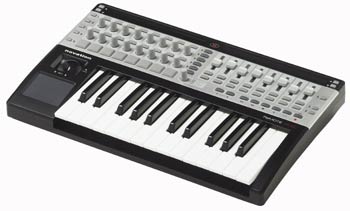 I have the Novation Remote SL 25, and in my opinion it rocks. I think the build quality is excellent and it’s very easy to program and finetune the controls to do what you want. I will agree with you about the drum pads though, they do feel very weird at first, but all I had to do was adjust the sensitivity so that I could tap them lightly rather than smash the hell out of them, and then they felt a LOT better. And you can map them to pretty much anything you want, whether you want them to trigger certain notes, or trigger MIDI CC values, etc., it’s pretty flexible.

Thanks for your reply dblue… I ordered the Akai after all. Thomann does have a 30 days money back guarantee if I’m not satified…

Thanks for your reply dblue… I ordered the Akai after all.

I must admit, the drum pad arrangement on the Akai does look a lot more natural.

I would’ve gone with the Novation. I’m more into knobs/faders than pads.

To each his own though.

The Novation ended up breaking but automap was outstanding

Quit throwing your gear around…

I have a Remote Zero… dig it. Never used the Akai but I think it looks nicer than the Novation.

Now, I have used the Akai for a couple of days and I’m totally satified. It feels very genuine and solid. The keys and controllers is much better than my old novation xio-synth. And the drumpads work surprising well in renoise…

And about this whole auto-map thing. The akai also have presets for sequencers and instruments…
Now I want more midi-mapable features in renoise

The transport buttons would be nice to use