Maniac Mansion is a great game for C64

Just look out for edna.

Even just for the music, exploding fist is great.

Does that count as retro?

Monty On The Run C64 version was a little infamous as having great game music. In fact I do believe that people in the mid 80’s…(cough) bought the game just to listen to Hubbard’s SID music:

Pointless trivia: Type ‘I WANT TO CHEAT’ in the high score name input screen, collect boat on second screen for invincibility. [Yeah, that one is easy, can look that up on the net -> https://www.gamespot.com/monty-on-the-run/cheats/ ] Okay, slightly interestingly the two other cheats (on that site) I can’t make head nor tail what that’s about. From my version that I have here I would’ve thought POKE2062,129 [4Tey’s cheat] would be more effective when the game is running for invincibility (achieves the same thing as ‘I WANT TO CHEAT’.) Also you won’t believe the swear words that are sitting in C64 memory to check for, for when 80’s teenagers type them in on the high score screen. Anyway, can’t believe everything (anything?) you read on the net I suppose, including spreading toothpaste on discs

More pointless trivia: Nibbles (Renoise version) contains all the (I think 30) levels from the original FastTracker 2…and 9 more levels.

One of the best MAME finds that I’d previously never heard of is Land Maker, a neat twist on the Puzzle Bobble formula:

I found ‘wipeout 3 - special edition’ for the playstation 1 to be quite relaxing and fun to play. Played through an emulator on PC (PSX 1.13).

Ive been getting into NES games again a bit recently.
The gameplay is sometimes better than modern games.

I have to recommend ‘image fight’ for NES…its such a nice vertically scrolling shooter (schmup)…the difficulty level is just right. Its challenging but not impossible and infuriating like some of the other schmups. The graphics are basic but very beautiful with a lot of ‘sky blue’, has happy feeling.

Playing it through NesterJ nes emulator on my old PSPslim…really fun, lots of weaving and dodging. Still, I have to use save states quite a lot…its still pretty difficult. Nice level of challengability, not too much, not too little. 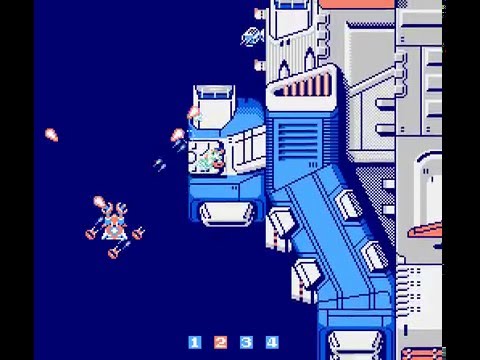 Sometimes its good to take a break from renoise tasks which can put strain on people after a while. One of the best ways to change up the frustration that can sometimes happen with long boring tasks of preparation is to play hardcore schmups.

I have been evaluating schmups on sega master system and found some very fun schmups, power-strike and power-strike2. Im playing them through masterboy emulator on PSPslim (3000)…not the best emulator but it works for these games although it freezes up and slows down for games like xenon2 which really pushed the master sytem to its limit.

The gameplay on power-strike is hard as fuck, you will need to use save states…the first level has pretty shitty graphics, but after level 2 and 3 the graphics are more colorful and magical, the music is funky as hell. I really enjoyed it. Some serious air battles, so much weave and dodge - you have to concentrate hard. Good game.

Power strike 2 has better looking enemies, the artwork is cool and it differs form power strike 1 in that it eases in the hardcore mighty intensity gameplay slowly over the first few levels, giving you a chance to get used to it. Its fast paced, non stop hardcore action all the way. You will need save-states. great game, satisfying. These old school game developers were awesome. I will seek out more old school schmups with good playability…many of the mame schmups like truxton are just too fucking hard - its ridiculous…almost non-playable…so im looking further back into the past history of schmups-mania…good times.

One thing I noticed with emulation is latency. It can be quite some big problem for gaming. USB Joypad, emulator, graphics card, hdmi tv, all add some milliseconds to the reaction time of the games. Like oldschool games ran on low latency hardware and crt tvs with quick reaction times.

First I didn’t notice the problem, and wondered why I kept falling down edges with jump & runs, when I tried to jump close to the edge. The I had a look for the time I pressed the jump button and the time I noticed the sprite jumping down - like it was a noticeable short delay, but you have to look for it consciously to see it…seems like the brain just adapts to the latency, but of course with the lag all games are becoming much harder to play, with time for a proper reaction being substantially reduced.

Turn out that retroarch has a very clever solution for the problem. They just calculate the core multiple times in ahead, for every possible button press and release, and choose which state to keep & display when the button has actually been pushed. So many games so much easier now…

Ive noticed latency in emulated games on android before but not so much on my PC even though my PC is not powerful at all. However Im only emulating old school games, 16 bit era or MAME games maximum. I havent tried N64 and dreamcast, stuff like that…I just dont think my computer can handle it.

For the games above, I was playing them on PSP, which has a bunch of emulators. Honestly, the PSP emulators are not so great. It is skippy, laggy on even sega master system games sometimes but only if they are hardcore games with good graphics for the time…all the NES games seems to run at full speed… Yeah, it was lagging with xenon 2 which is a shame because I really like the artwork in that game.

Weirdly, it will run certain genesis and snes games, but seems to handle platformers better than schmups. I guess with the genesis and snes schmups there is more going on onscreen at any time. it can be quite hectic compared to platform games. I tried bio-hazard battle and steel empire on the PSP emulators, its too slow, starts lagging and sprite started flashing/flickering…same deal with bio-metal and super r-type for snes. The PSP3000 is not the most powerful thing in world