I have used a sequencer on the iPad named iSequence. This is actually an amazing app, but it was abandoned by the developer, plus it has many limitations because it is on iPad. However, this app did a few new things when it comes to the user interface of a sequencer or tracker. I think part of what appeals to me visually about it, is how the pattern page never moves. The current playing position moves around, and the note selector/editor also moves around, but the pattern page itself stays fixed. Something about this makes the entire thing easier on the eyes. When everything is moving in Renoise, it is harder to follow what is important. I am sure that with enough use, I could get used to it, but having seen how iSequence does it makes it obvious how much of a difference it really makes.

I showed my friend Renoise yesterday, and he was a bit overwhelmed by what was going on. He couldn’t tell what was happening exactly. When I showed him songs on iSequence in the past, he could immediately see what was going on. This made me think about why this was happening, and I concluded it has to do with how the pattern editor is a bit overwhelming to look at or follow while a song is playing.

There are 3 things that would improve this: fixed pattern page that doesn’t move around, removal of ALL the “----” lines that are used as blank placeholders, and a better font or spacing for readability. I was able to use the vertical and horizontal spacing adjusters to make it significantly easier to read at a glance. The pattern page moving around probably has the biggest impact though.

I think most of this comes from the idea that information can be presented in a way that improves the speed at which the information can be processed visually. Certain fonts are designed to be more readable quickly at a glance. The spacing of elements also greatly improves the speed. I feel that a lot of the interface of Renoise is designed around the heritage of Trackers, so that is why things are implemented the way they are. In a way, the thing that makes Renoise great, is also what causes its quirks.

I am new to Renoise, so maybe I just need to overcome these things. But, I feel that an option to disable the center bar being center all the time, despite how ironic that sounds, would be a great improvement.

Move the cursor instead of scrolling the pattern
rocknlouie (rocknlouie) February 3, 2019, 8:58pm #2

I was looking through the compiled list of ideas and suggestions and found this:

so really I just double posted. Sorry, I tried to search for center bar before posting, but didn’t find that post.

I found that there has actually been quite some discussion on this topic for several years. There seems to be some confusion about how this idea might work, but Gwynevyr clears it up nicely in one post:

I would like to add that the reason this is important, is because when you redraw the entire screen, aka move the pattern rather than the line, your eyes/brain have to re-read the entire screen. If you just move the line around, your brain doesn’t have to re-analyze the whole screen, just the part that moved, the line. This shouldn’t really just be seen as a personal preference thing, this really is a huge improvement on visual efficiency for anyone using it. Because it is actually less work for the brain/perception to process.

I was thinking the same thing the other day. Having the pattern scroll because I selected a different line in that pattern can get quite annoying when viewing the entire pattern is important.

Is this something that could be implemented as a tool?

I’d prefer it be a built-in option, but tools can be a faster way to get a feature.

2016 thread. There seem to be many separate threads talking about the same thing. This feature is in high demand by Renoise users.

As long as it is an option to enable, this feature makes sense. Let the user have control. It is clear that many users find it difficult to read notes quickly in the pattern editor, the movement of the cursor being a mess to the eye. If there was another layer with configurable line markers (same as Impulse Tracker) this would help the view on jumps: 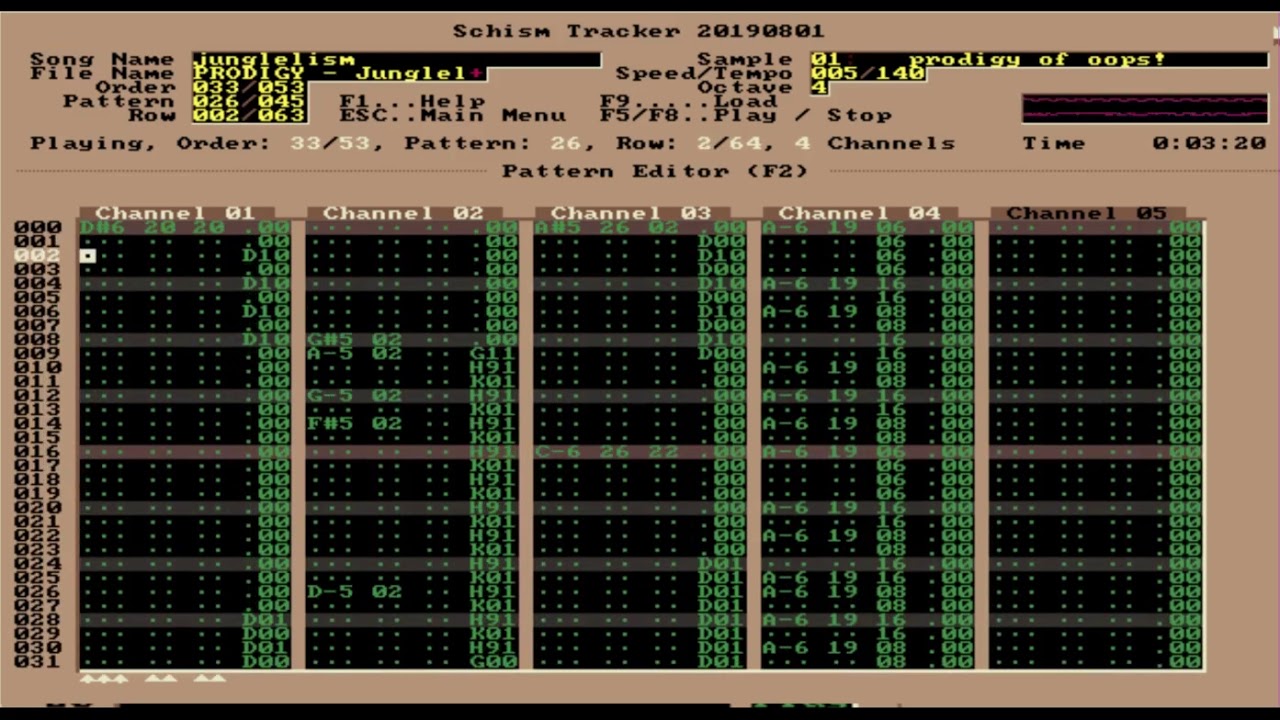 Having line markers (could match the bar) visually helps you locate notes within a block of lines. Renoise only has one layer of line markers. As you can see, Impulse Tracker has two layers of line markers. In this case, the first layer is every 4 lines. The second layer is every 16 lines. Of course, each layer is configurable with the number of lines and the color. Both layers can also be disabled (disappear). I don’t understand why the heck @taktik doesn’t implement this!

Is this something that could be implemented as a tool?

Cursor movement cannot be fixed with a LUA tool! It is an intrinsic behavior of the pattern editor / phrase editor.

The only easy way to implement it is to copy the behavior of Excel. However, it wouldn’t be a fun way to chase down song playback. You would have to find a criterion to analyze blocks of lines or simply use the classic Renoise reproduction, moving the pattern line by line.

This would be very useful on short patterns, 32 or even 64 lines if they fit on the screen. If the pattern has a lot of lines, it would be muddier.

I honestly think a top coat with the extra line marker would suffice.

oh I’m sorry I hurt your sensitivity. I just added my support to a topic that has been covered by multiple users over the years. I am amazed that in a forum this can be considered an illegal act.