Wanted to see if the experience I’m having running Massive X in Renoise is the same for others. In Renoise only, I’m getting very choppy graphics on knobs most of the time. E.g. turning knobs – especially when sound is playing back from the synth – results in choppy UI graphics, that is, the knob doesn’t move smoothly at all, it moves in chunks. It doesn’t effect the sound at all, but graphically, it’s a mess.

Meanwhile, running Mx in Ableton Live 10, there are zero issues, the knobs all animate smoothly. So something seems to be up with Massive X + Renoise, at least on my system – iMac / OSX (low) Sierra.

if anyone has MX and can check this out as well, let me know what you find, thanks!

bumping this because it’s still a problem – the UI of Massive X is completely un-smooth in Renoise, while working fine everywhere else (Ableton, etc). Is it just me?

and this applies to Catalina as well as High Sierra, btw.

I’ve got the same. Also, all Native Instruments Effects Plugins, like Raum, unresponsive too.
In general, Renoise UI became much more CPU resources hungry, My iMac with 4GHz i7 CPU is straggling even to scroll song in pattern follow position mode.

@Zeos I brought up the UI issue of Renoise itself in a different thread, and a workaround was presented, and the thread was closed by Taktik. I’m actually frustrated it was closed, though, as the workaround is exactly that – a workaround. If you open your mac Display settings, go to Color, and change to the RGB mode (the name is longer than that, but contains RGB and is probably the one at the very bottom of the list) Renoise UI will run normally without any glitches. But, that mode makes everything else in my OSX look brighter and also some plugin windows look too bright. So, I have to manually change display every single time I open Renoise, then change it back when I’m done. It’s pretty lame, thus my frustration that the devs consider the issue ‘closed.’

The issue with plugin UIs having crappy performance, however, is NOT resolved with the ‘RGB’ mode trick. So currently there is no fix for the crappy performance of Massive X UI – and apparently, as you’ve pointed out, most other newer NI stuff behaves the same way in Renoise.

I really hope this can get resolved, it’s verging on deal-breaker territory for me.

So, I have to manually change display every single time I open Renoise, then change it back when I’m done. It’s pretty lame, thus my frustration that the devs consider the issue ‘closed.’

This post in relation to that: Slow framerate with HiDPI in fullscreen mode (on a Mac Book Pro 2018)

@4tey Interesting, I had missed that particular thread / post. Sounds like they are working on it, hopefully some progress is made. Thanks for the heads up.

Not clear, though, if it will resolve the UI performance issues with plugins like Massive X, since those still don’t work properly even when the color profile is updated.

Thanks a LOT, Michael! I have dig into it a little and found my old iMac profile from 2015 which works very well with Renoise and also its not that bad for general purpose.It’s slightly more vivd, but just a little (link attached).

I have compared two profiles, original iMac and the old one, here is a screenshots
Left > New; Right > Old 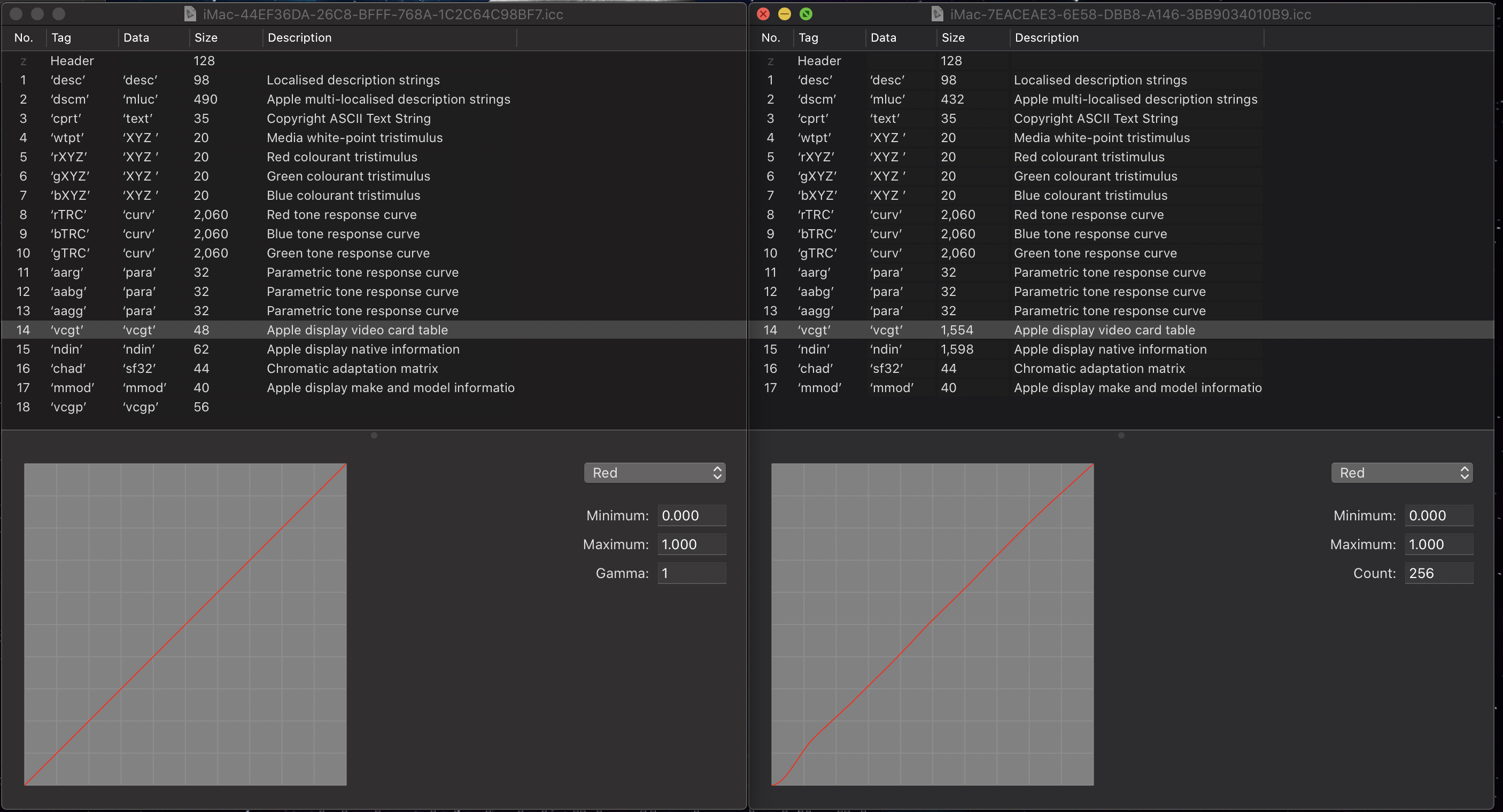 (I have highlighted the data string with significant value difference, which is Gamma)

Thanks one more time, Michael!

Yeah guys, it is not too hard to switch to sRGB profile. And you should blame Apple for this problem. BTW. why do you exactly need 30bit color depth? I barely can see a difference to 24 bit depth, and also my monitor only seems to support like 20bit (I see some stepping in grandients with my cheapass 4K monitor).

Apple does not document changes and its APIs well. So the developer will do guessing games. U-He fixed this problem in their Zebra GUI using async CoreGraphics updates, but it does not seem to work in Hive, for example, because they use custom drawing code there. That sounds to me like Taktik would have to re-code all the GUI drawing code to use the methods Apple wants. And then macos could decide “yes, I will draw this GUI on the GPU”. But why should he do that, who will pay him for such a work, Apple?

that’s a ridiculous response. I have Ableton, Logic and Studio One all running on this system – none of them require me to change the OSX color profile in order to use them without major UI slow-down. But you insist it’s Apple’s fault, not Renoise, that I have to change it for Renoise, and Renoise only? Give me a break.

The profile that makes renoise work – sRGB… – makes other things look crappy. ValhallaVintageVerb, for example, looks super high-contrast and ugly when running in that mode. And that’s just one example, there are many more.

Here everything looks just very normal with the sRGB profile. Also all Valhalla stuff, not sure what you are talking about. Sure, you can’t use the montor color profile, which could lead into slightly detuned coloration.

I am just writing how it is. I am am pretty sure that there won*t be a GUI code rewrite or real fix because of this. macOS does not like CPU drawn GUIs anymore (or GUIs which it decides to draw on the CPU or so). And there only is a small way to enable GPU drawing. So this won’t happen in Renoise. maybe try to live with it.

your reply isn’t even on topic. this thread is about plugins like Massive X having jerky / screwed up performance in Renoise (and Renoise alone, once again). The previous color mode stuff came up, but if you check the actual OP and Topic, it’s not even what this post is about. So no, I won’t “try to live with it” – changing color mode doesn’t fix the UI performance of multiple NI plugins. It needs to be addressed.

Oh yes, sorry aboout that. Mixed up with the other topic. But it is the same reason, the reason are 30 bit color profiles/depth, and somehow developers are not allowed to use 24 bit drawing only or so in the Apple API. No audio GUI ever will need 30 bit color depth, its a total waste of CPU/GPU. It would be easy, if the developer could give its CGcontext a flag “24 bit only” or so (or maybe its the conversion of 24bit drawing to 30 bit?). But this does not seem to exist. Taktik would already have fixed this, if it was just some update of code. But he obviously needs to investigate like a cracker what’s wrong with macos.

Also maybe NI could fix this problem instead.

Sadly there’s not much incentive for NI to fix it since the plugins run as expected in just about every DAW except Renoise. So, again, as much as it sucks to have to keep playing keep-up with Apple’s craziness, that does seem to simply be part of the dev job. The other hosts have figured out how to adapt, hopefully Renoise can as well, or it’s only to get worse from here on out.