Last time (before latest Redux update) Redux did freeze mixbus whenever its editor is collapsed as stated here:

Now the issue is that whenever i try to load Redux into Mixbus, i get instant crash. Nothing can be found in the Mixbus error/stdout logs. Tho there is apple diagnostic report which i can send to the developers for further investigation. I’ve contacted Mixbus support also, and shared same informations,

Without knowing the internal operation of the plugin, it’d be hard to tell, you might want to pre-emptively forward it to the Redux developers, pending our own analysis.

We are willing to consider any changes they reccomend!

Harrison support reply:
Hmm, the report is pretty nonspecific, it looks like the plugin was being loaded and something about it caused it to crash. Beyond that it’s hard to tell. I’d definitely recommend you contact the developers.

There seem to be some problems with the input bus configuration in the AudioUnit version of Renoise in Mixbus. I’ll try to fix this or contact Harrison to get this sorted out.

As a workaround you could remove/disable the AudioUnit version and use the VST version of Redux in Mixbus instead.

Hi Taktik, i’m not in urge to use Redux, i just wanted to let you know, i use mostly Renoise standalone… But this is something that irritated me alot

Please, do so because the guys from Harrison’s support are really pleasant and open for literally anything… i really appreciate their support a lot since they are reachable anytime, for anything…

Thanks for the support!!

There seem to be some problems with the input bus configuration in the AudioUnit version of Renoise in Mixbus. I’ll try to fix this or contact Harrison to get this sorted out.

Thanks for the heads up!

I’ve just fixed this in Ardour/git and it will propagate to the next release of Mixbus.

Meanwhile this can be worked around by creating a MIDI track without synth and then first adding an audio-input to the MIDI track before loading Redux – click on the input selector, and pick “Add audio port”: 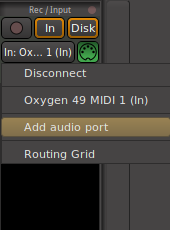 At the time of writing this (Ardour 6.2-149), the crash when removing the plugin still exists though.