Playing a sample as an instrument?

I’ve been so busy with cutting up breaks, now I realise I want to use some other sound samples to play as instruments. I’m not talking about complex keymapping of multi-layer samples or anything, just the ability to play a sample without it speeding up/slowing down.
Like this in Ableton: https://www.youtube.com/watch?v=AVvGo4m2joM

I’m not sure I understand what you want, but if you just need a sample that plays exactly at same pitch & duration on every note, perhaps you can try the button “Key->Pitch” and disable it: 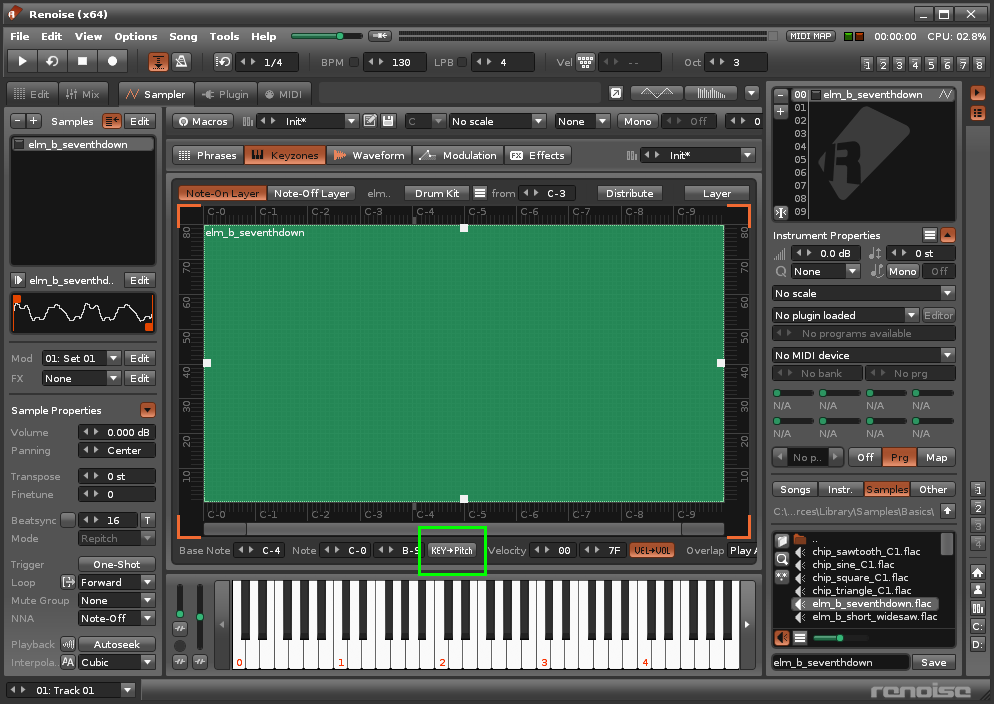 I need the pitch change, so it plays up and down the keyboard, but it needs to sound natural like an instrument, not like chipmunks at the high notes and slow death at the low notes. Speed of sample needs to be equal.

you just need to import sample, set loop points and there you go.

to ‘sound natural’ you have to invest a lot of time actually… natural as a natural sound, or natural 808 kick tune is different in every sense… you have to be more specific rather than ‘natural’

the approach is same in renoise, as in any other sampler (simpler from Live as well). I’m not sure how one used sampler without looping anything at all… hmm… not natural to me

Speed of sample needs to be equal.

more wrong than it could be. speed = pitch

you just need to import sample, set loop points and there you go.

to ‘sound natural’ you have to invest a lot of time actually… natural as a natural sound, or natural 808 kick tune is different in every sense… you have to be more specific rather than ‘natural’

Well if I want to take an organ chord sound for example then use that and play it up and down the keyboard ‘as an instrument’ . I guess Renoise has no way to do this other than keymapping multi samples and losing many hours of ones life. Other things can do this with a button click (and in the video they use ableton and Simpler sampler)
I found another thing (ableton again, but he said concept applies to all) he said about setting loop points but I can’t get it sounding right in Renoise just with setting loop points. if you watch closely animation of loop, this is achiavable in renoise at same level, so i do not understand your point. Pick better samples? invest some time? abandon renoise, use ableton?

so you take same sample in renoise and it does not sound right, but in live it does? or what?

Well if I want to take an organ chord sound for example then use that and play it up and down the keyboard ‘as an instrument’ .

then the whole vst instrument market would break, if it was this easy to ‘replicate’ the full range with one small sample increment, to sound perfect…

Please either provide sample, or at least use ableton live to create what you refer to, and post here so we can help. Otherwise it’s just a chat without specific goal. Simpler is more limited than renoise in every sense… that’s why ableton has ‘sampler’ device…

i suggest this as well or see my quick demonstration: (ofc if you go too far from the root note/pitch, it will not sound nice in any sampler - not applicable to samplers which utilize more sophisticated approach than only by looping) or if you need better crossfade… but you do not want to do it manually: 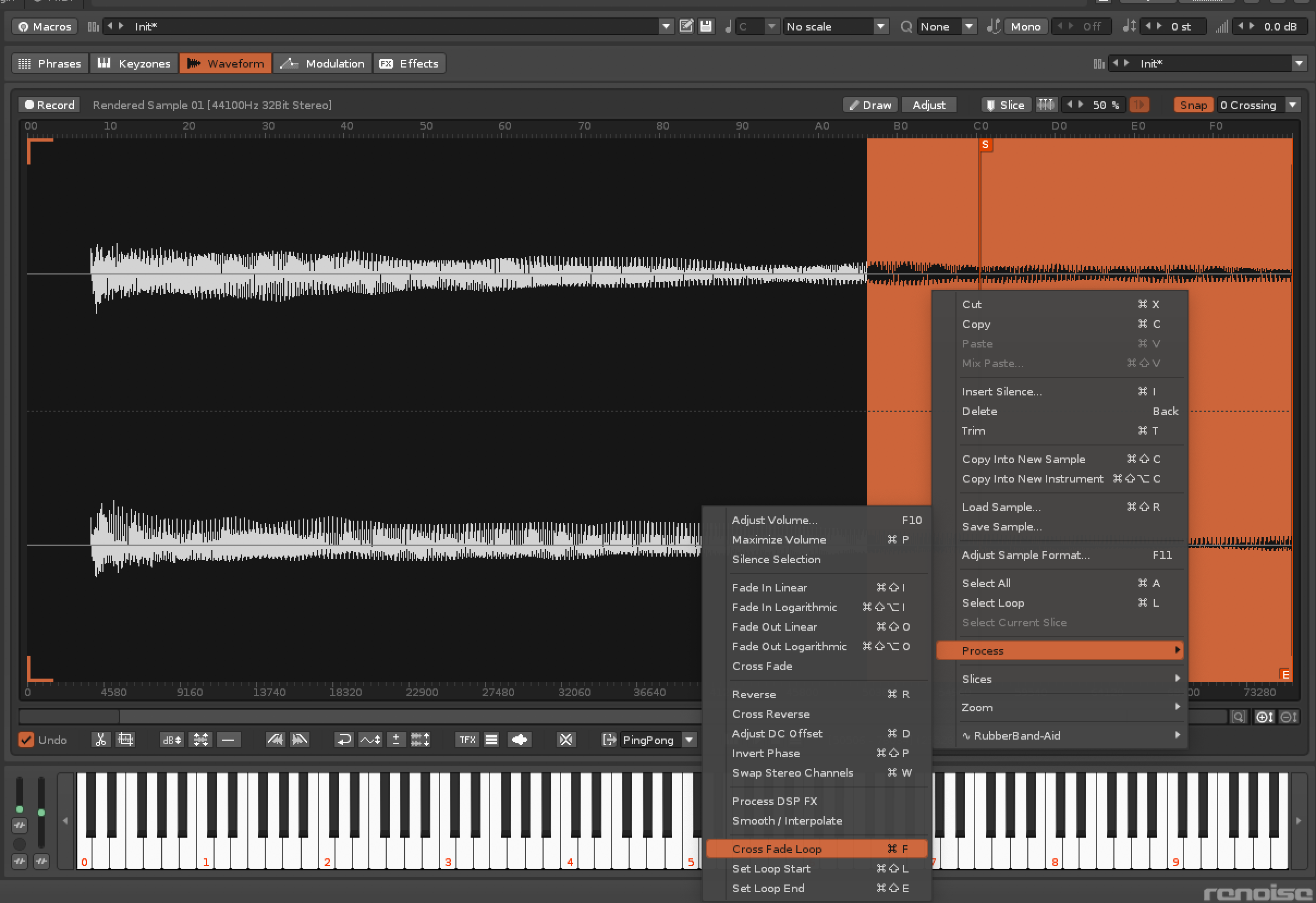 i suggest this as well
https://www.youtube.com/watch?v=AnIpmDO0tyk

or see my quick demonstration:
https://youtu.be/O1uqMyrczww

or if you need better crossfade… but you do not want to do it manually:

Ok thanks. That video and the guy explaining soundforge … I used to use that too, way back :)… in the end he is in software with 7 or 8 samples to get the whole keyboard scale range (that’s what I’m trying to avoid, and just needed a quick sample to play… more like 90s rave was made with limited one sample spread across the keyboard …BUT sounding playable)

Think it comes down to the loop points and crossfade (I couldnt get the clicks out of my sample, so I’ll play with some others and see how it goes)
Single drawn waveform sounds fine so maybe it’s just getting the loop points right - he also mentions this in the vid you posted.

Ok thanks. That video and the guy explaining soundforge

you are missing the point. it’s about technique, applicable to every sampler… ← sorry i read wrong your reply (EDIT)

it depends on how ‘realistic’ you want it to sound (and have time to make it)…
if you need only specific range - or perhaps higher pitches, then you do not need more than 1 sample, but if you want the whole range… then it wouldn’t be an easy task (to make it sound somewhat realistic)… but then, there is automation, and arrangement aspect from which both can either contribute to ‘realistic’ sound, or make it sound unnatural…

get a good sample - in the sense of your personal preference, and you are already half-way there

Ok found it. There’s a ‘Create Cross Fading Loop’ button which gets rid of the clicks and basically does what the guy was doing on ableton, and like he said was cross compatible in any s/ware in the vid. see below

p.s. It was never about making anything sound realistic like a grand piano. It was so the sample didn’t cut off at the high (short notes) = loop, but then the loop, and end result had to sound usable. Solution: crossfade fade loop. There’s a button for that

before and after also attached. 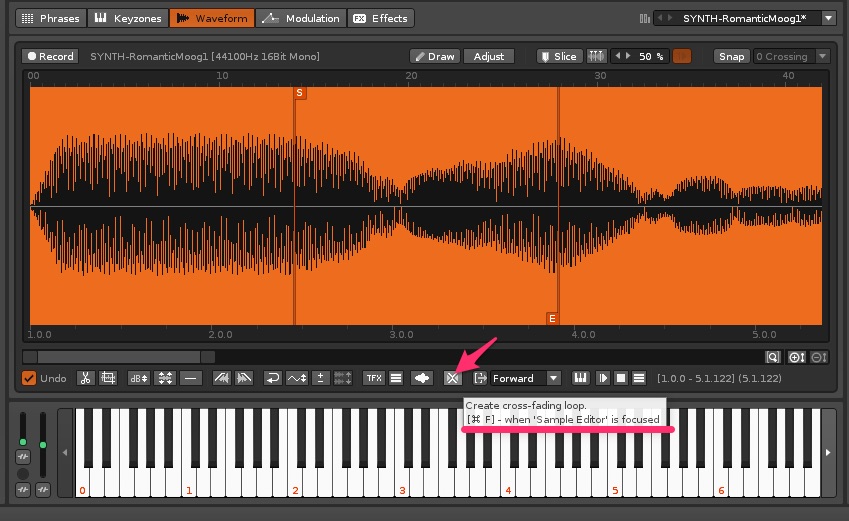 …because:
1.) the samples were recorded and looped perfectly. Tip: try to use the zero crossing points on the perfect time positions for the loop start and loop end point.

2.) the samples were recorded with relatively high played notes. Because pitching down a higher played sample will sound better than pitching up a lower recorded sample (which often results in that “chipmunk” effect).

Another way, that some of the famous sample based synths of the 80s and 90s (e.g. the Roland D-50 or the Korg M1) use, is a kind of hybrid technology. This means one part is sample based and a second part is synthesized.
I own a D-50 and for example, this synth uses just the “attack” part of real sampled instruments (by using just one single sample). The rest (the sustaining part) was done with real synthesis. Depending on the situation the synthesis part of the D-50 uses a saw wave or a pulse wave oscillator to realize the rest of the sound. For example, a panflute sound was realized in the D-50 by using the attack part (the first 100 to 300 ms) of a real sampled panflute to get the transients and/or that “breath” feeling of the flute. The rest of the flute is done with a synthesized pulse wave (the pulse sounds very close to the sustained part of the panflute). The pulse runs through a lowpass filter with the right cutoff settings to get rid of the not necessary frequencies) and some slight LFO modulations on the pitch to get that “vibrato” feeling of a real played panflute. Also using PWM on the pulse wave can affect the overall sound to e.g. make the sound of the flute thinner or fatter. All together with the right tweaks you get a very real sounding panflute even on higher notes.

If you want a really good sounding sample based instrument, you always have to do some work. Without some effort you can’t get a good sounding result. I often spend a lot of time on recording and tweaking a single sample to make it sound good. I even record a sample several times because sometimes i’m not satisfied with the recordings.