Plugins drain CPU before they're used

Strange behaviour - pluigns (like Vital for example) drains CPU before they start to be using. I mean - I have for example 10 Vital instruments and after I load song, CPU is instantly go to 99.9% and song plays choppy. BUT - when I play them one by one - CPU usage decreasing (every instrument/plugin activation - when it starts playing) and remains at lower level after instruments ends playing.

Happens on my i5-9600K as well sometimes, no clue what’s going on I just give it a break and let the dust settle

… but it helped changing the Win10 power options to High Performance.

I have High Performance enabled and customized.

Renoise allows each plugin to consume the % CPU allocated for audio processing it needs. Therefore, if you have 10 Vital plugin windows (or any other) running, each one will consume a % that is added. To avoid this, go to the “Plugin Options” window and check the box “Auto suspend plugin when silent”. 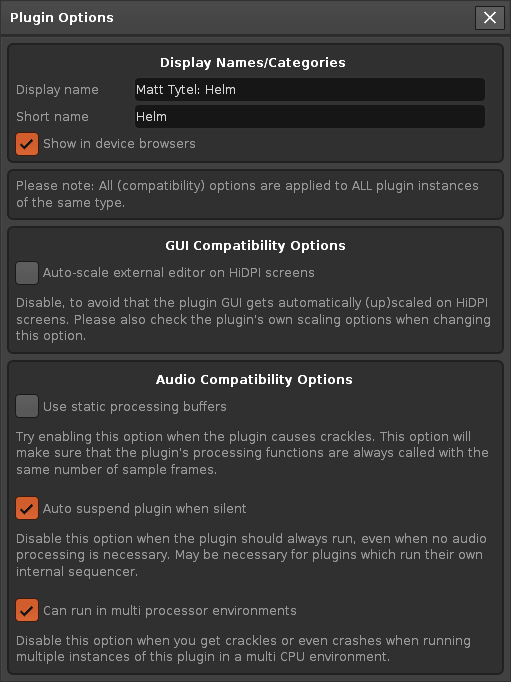 Repeat this step for any plugin you want to “control” its idle audio processing.

If it is a solution without any drawbacks, then why is not enabled by default?

If the cpu usage is higher while no audio than with audible audio, it most likely is a problem with denormal (veeeery small) floating point numbers. Those will cause the CPU to enter an “high precision” / extremely slow special processing mode, which totally messes up performance.

Maybe a workaround is to enable auto suspend then, but denormals can be considered as a bug and should be reported to the plugin vendor. So it might be good, if you really determine here which plugin is causing the problem, since it also can be any kind of fx processing plugin, too.

It even is possible that Vital is not the cause, although it seems so. Maybe Vital is just not outputting really a zero value on idle, so then it triggers some processing vst, which then could have a problem with denormals. An accurate test would be here to remove all fx, save the project under different name, reload it and check, if the problem still exists, etc.

If the cause is a processing fx, then a workaround might be to add a dithering plugin before the fx, so the noise floor never drops to denormal levels (which are insanely small, nobody needs any processing in that area).

I was asking if there is an option to disable plugin when is not used, then why this option is not enabled by default?

What is strange here that Task Manager shows 80% idle at the same time when Renoise shows 99,9% CPU usage. So there is plenty of CPU power left.

It is not enabled by default, because Taktik chooses the most compatible setting by default. auto-disabling might cause audio cutoffs with some plugins, or interfere with the plugin’s own mechanism. This really is a plugin problem, not a Renoise problem.

What is strange here that Task Manager shows 80% idle at the same time when Renoise shows 99,9% CPU usage. So there is plenty of CPU power left.

The Renoise meter can already show 99,9%, if only a single core is maxed out, it shows the peak value. The system task manager calculates in the average of all cores AFAIK.

I would say Renoise isn’t handling the CPU optimally.

I’m working on a song that if I turn off 40 of 45 tracks it still bogs down when pressing play after right-clicking the stop button, even when just playing snare and claps with reverb it consumes 92% of my 6 cores intel 9600k CPU with no other applications taking much CPU in taskbar.

I just tried turning off all tracks and have no sounds playing yet CPU is at 84%, this is not how it should work!?

Hard to say, also my knowledge ends here. I guess only Taktik could say something valid here anymore…

But keep in mind that

Yes I am on Windows and in this song I only use mainstream plugins from Arturia, Sylenth, Izotope, Native Instruments, Fabfilter and Soundtoys, so no obscure plugins.

I know I am on the edge of what my CPU can handle in this case, but I am at a point where I can no longer work on the song unless I remove something entirely as turning off tracks and plugins has no effect on CPU usage which is what I believe is suboptimal of Renoise.

This issue is obviously different from OP I just mention it as it’s CPU related.

Izotope has some weird behaving plugins e.g. that spectral shaper thing. Since you are on windows, you actually could install buzz and test those. Are you bridging any plugin? Try to disable the sandbox completely then, and replacing any 32bit plugin.

I agree though that Renoise still has room for multicore optimization, but it is a very complicated topic. I converted a bunch of songs to Bitwig, using the same fx and track amounts. In Bitwig, I never ever have to increase the audio latency, everyhing runs at 8ms/48khz fine, but the Renoise song counterpart often requires then 20ms or so.

I experienced similar lately as you are describing it, in some projects. Also the GUI is taking a lot of CPU power just to be refreshed all the time. If you use 4k, maybe try to rerun the project then at fullhd instead. fullhd is a quarter of the size of 4k.

So try some tests to nail down the actual problem a bit more. I think Taktik so far barely can find any useful information here. But I can’t speak for Taktik hehe

turning off tracks and plugins

This might have no effect at all on CPU, at least turning off tracks. Not sure about turning off plugins, but at least the latency/PDC always is kept. The only valid test here is to remove the plugin.

Turning off tracks and plugins does indeed not have much of an effect likely due to the PDC but it does give back some which can be meaningful, anyway that’s something that arguably need a solution else Renoise is kind of impossible to work with when you are close to maxing out.

How about a new “Bypass container” device that works like the doofer but has the ability to completely bypass / turn off everything inside … or add a Bypass button on the doofer.

Yes, that’s a good fix to finish arranging a song … can’t wait to upgrade CPU though

I now installed the recent VPS Avenger including that shitty copy protection… The plugin STILL has heavy cpu spikes. Also I can’t see a lot improvement over the old 1.4 version either. Such a pity, the concept and sound of the plugin are awesome, but the coding somehow… No other plugin produces such spikes. Should be common sense that in audio DSP such spikes simply are not allowed and then need to be avoided by buffering, precalculation or whatsoever. I don’t get these guys, and neither their fanboy customers.

Well, I was testing demo of Avenger and first I thought that it was super, sounds great etc. But then I starting disabling effects attached to presets. And without reverbs and delays (lot of them in almost all presets) it sounds just plain, nothing fancy. Nothing that you can do using any other plugin + separate effects. Avenger just have “wow” presets, that’s all, but you need to decrease strenght of these effects anyway to use most of sounds. That’s my opinion. Add TAL Reverb 4 + some nice delay (like Dubstation) + dTune + eq + sometimes saturation/exciter plugin and/or wider and you’ll have your own Avenger. I think Phase Plant or Serum are much better and if someone wants cheaop rompler with some interesting sounds that can inspire sometimes - Ascension is nice (when discounted). It has crappy control over sound, lack of velocity etc., but you can always use Renoise velocity tracker and LFOs, right?

Well, I really like about it the user interface, the huge editors, and the amount of filters, osc engines and the waveshapers. Phase Plant would be nice, but I think it already lacks of complex filter routing and cross modulation of OSCs.