I’m thinking the -Mxx command is supposed to edit the mixer level for the track - but it doesn’t seem to do anything? I’m I completely mistaken?

If so how do you change the mixer level per instrument?

Mxx should change the “note volume” of the note(s) it is next to. What you might be looking for is the “Lxx” command which will control the pre fader. I’m not sure if the post fader is automatable?

As OopsIFly already mentioned, the Mxx command changes the volume/velocity of all notes in the track on that pattern row.

If you want to adjust the volume/velocity of each note independently, you can use the dedicated volume column which is enabled by default and positioned just to the right of the note column itself.

To set the track’s pre mixer level you can use the Lxx command.

It is not possible to automate the track’s post mixer level, but you can insert a Gainer at the end of the device chain and automate that instead to achieve essentially the same result.

ok cool - seems a shame as watching the mixers while doing final levels seems to be the most established and intuitive way to monitor a mixdown.

Automation is too fiddly - as you cant really work across patterns in any effective way.

Automation is too fiddly - as you cant really work across patterns in any effective way.

You can zoom out the automation editor to show your entire song if you wish, to get a pretty clear view of what each parameter is doing at any given point in time.

The pattern editor is king when it comes to intricate fiddly detail work, but I much prefer the automation editor for gradual filter sweeps, volume changes, and other things of that nature.

Edit: But yes, this is of course rather different to the traditional approach of working with the mixer faders. 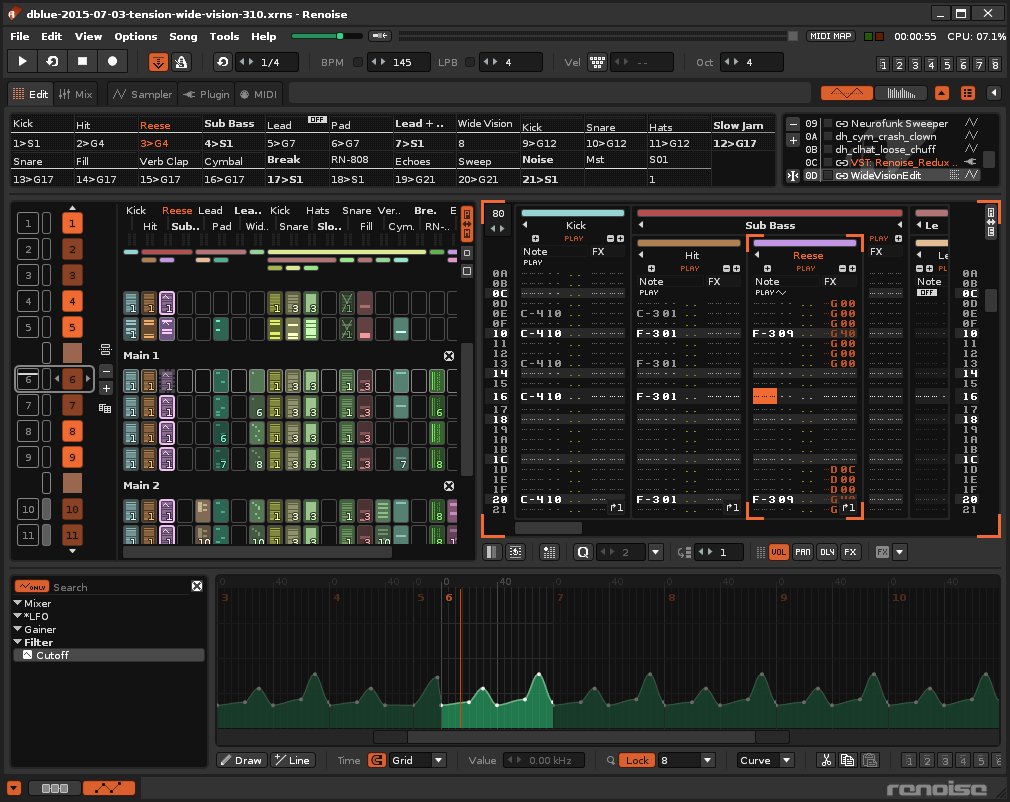 the gainers in the mixer view can also be made to show the gain slider, and you can watch them while automated. I think this also makes sense at a certain perspective, because the sliders will move almost full range (wenn -inf to 0 db) an all the same for fade in/out, while mixer fader automation would be warped to certain levels that you would have dialed in to balance the instruments.

To statically gain an instrument you can also make it output all sample’s action to an instrument fx track and add a single gainer there. Then it will work to level the single instrument, even when multiple instruments go to the same track. It also could be automated via a macro, then even defining the range yourself to automate the macro 0…100% full range within the set limits.

As I am learning there are 100 ways to skin a cat in renoise - which makes it pretty wonderful. Thanks!