This is a feature request for a new native effect recapturing the flame of creativity of a certain VST effect a lot of us have fallen in love with over the years. Glitch unfortunately seems to be buggy in some regards, especially in terms of causing total playback dysfunction in Renoise 2.8 (sometimes all the audio dies and the CPU skyrockets up to 99%). dblue has stated publicly numerous times that updates to Glitch will not continue. Perhaps this has been a good sign to simply move on, but I’m sure there’s some producers out there who have some works in progress that have parts that rely upon Glitch’s uniquely awesome behaviour. Given that dblue and sharevari kRAkEn/gORe of recent times been making some new cool effects (Repeater, Multitap, etc) now may be the time to propose a Renoisian glitching super-effect.

Props definitely go to Monsieur Baguette for the Tool that comes close to fulfilling this need: Baguetter. While Baguetter producers it’s own unique behaviour and has the advantage of being able to work with any plugin you may have, it doesn’t have the re-usable VST function that Glitch has. Baguetter’s switching would be brilliant for live purposes, but so far I haven’t been confident in using it for compositional purposes.

I envision a native effect that is a ‘container’ for other native effects. This container allows the user to assemble an array of native effects per the needs of the glitching. The top part of the container could have much the same as the current Glitch engine, perhaps with some evolution to really tie in closely with Renoise’s functionality. Of the traditional Glich modifiers we already have partial equivalents in the form of RingMod (covering Gater as well), Repeater, LofiMat, and Multitap. That would mean that equivalents for TapeStop, Shuffler, Reverser (I miss this in particular), and Stetcher would be needed (or replaced with evolved versions). These would make wonderful additions to the native effects.

I understand that this is a pretty audacious request, nevertheless I’m sure I’m not the only one who has thought of it before: might as well have a thread for it to confirm viability, or insanity.

dblue has stated publicly numerous times that updates to Glitch will not continue. (…)

Not true. In fact the next version is already in-progress

Perhaps the container effect would feature buttons that could be configured to set multiple parameters of multiple contained effects to certain values. You could use an LFO to create effect envelopes and pull off a modular setup similar to StutterEdit.

I really just want effect grouping though. Effect folders, racks, whatever you want to call them. Something that can be used to group effects into a multi-effect, super effect, whatever. The main thing would be to have the ability to collapse them in the mixer and DSP areas and view/control only the pertinent parameters through the rack thing.

The more I think about it, the more awesome it would be. Is there a feature request for that yet? There definitely should be. I don’t think it would be all that difficult to implement either.

EDIT: Think Hydra but with a little collapsible wrapper that you can stick effects into.

yup Mac version would be welcome!!!

Not true. In fact the next version is already in-progress

Wow, dblue! I’m looking forward to that, verily! I shall cultivate patience.

Still, some sort of Renoise glitching engine would be cool… btw, thanks for correcting my post: apologies to kRAkEn/gORe for not remembering correctly.

think i just had a sex wee

question is; vst or native?

Vst would be good for glitch and dblue. Native would be a lift for renoise

messing with the new repeater for glitching.
3976 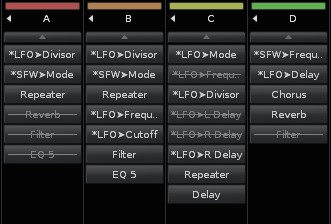