Ok, I have a bit of a weird question.

What if I was so OCD about keeping my projects clean (asking for a friend, right…) that I needed to rename this (red circle)…

…without having to save/delete presets or copy things into new instrument or anything. Just a quick rename, like in the parts marked in green.

Is there any way I can do that? If I load up a project done in an older version of Renoise, it’s automatically clear (“Init”). With the new version, it always keeps whatever filenames I (err… I mean my friend…) had in the folder.

I’m aware it’s not a top-priority bug fix by any means (not even sure whether there will be a final update or such) but it still annoys me, after having gotten used to ‘cleaning’ cluttered texts from my projects since, well, pretty much the 1995 FastTracker days.

It’s annoying seeing a sample named “__quick-n-shitty-reocrding-_test11” up there, in an otherwise surgically organized project…

Saine, I’m not really saying that this helps at all, but what I found is that if you click on ‘Save Preset As…’ and then click cancel to that dialog, ‘Delete Preset’ option should become available, click that, then click yes, and that might bring the preset back to ‘Init*’.

Saine, I’m not really saying that this helps at all, but what I found is that if you click on ‘Save Preset As…’ and then click cancel to that dialog, ‘Delete Preset’ option should become available, click that, then click yes, and that might bring the preset back to ‘Init*’.

Yeah, sure, it’s a quirky workaround (would make more sense if the delete preset option was available straight away) but… It works! Thank you

I thought I had tried that, but apparently, I hadn’t. Awesome

A few versions ago the workaround suggested by @4tey still worked, but no longer does = can’t get the “delete preset” option to be shown anymore.

I know one out of a gazillion people are bothered by something like this, but just bumping this in case a fix is out there.

What the issue is:

If I have a bunch of samples named “grammys_diarrhea_just_reached_level_10----pleasenotenewrecordingversionsopleasedeletetheoldversionok###TEMP.WAV” it annoys me that the text will always be shown, when the project file is just trying to be cool and low key.

I can remove it (so it just says “Init”) by selecting the entire range (of the sample) and clicking “Copy Into New Instrument” and then matching all the sample settings, but this is a hassle.

Can you post a screenshot of exactly what you are talking about?

My mind keeps going straight to Control-R or Right-Click -> Rename, but I have a feeling that is not applicable to the specific scenario you are describing.

Like in this drop down menu on the far-bottom-right?

Yup! That’s the one

Basically it’d just need to default as Init* like in the older versions - or have the ability to clear the name / delete preset (but keep the sample).

I’m coming back here once every two years about this.

It is -still- annoying as hell. To re-cap:

Sampler always shows the -original- file name of a given sample at its top right corner - and it cannot be renamed/cleared.

I have to A) select all in sampler B) copy into new instrument C) delete the original one, in order to clear it.

I’d like to either have it default to untitled or “init” (like in ancient versions of Renoise) or have the ability to just click rename and clear the original name by hand.

Alright. See you in two years!

Does ‘Rename Preset’ not work for you?

It is greyed out? (As it is not a -saved- preset as such)

Ah, I see now that this also happens with regular old samples that are loaded in and not just the presets. You could ‘Save Preset As…’, which will rename it there (and then just delete it if you don’t want it in the User Library). I’m guessing this problem exists because there’s no way to detect if the sample came from a preset after it’s been loaded.

your original screenshot is gone in OP, so this thread is confusing af, lol… what’s the problem exactly? Are you bugged that the preset name becomes the sample name? If so, I’d suggest renaming the sample before you load it initially, then you can have a clean preset name appear, if that’s, in fact, the issue

Thanks guys, and I do apologize for this mess of a thread.

It all started out quite clean (with that screenshot and everything) and then nature took its course.

@Achenar thank you, that is probably the best compromise solution currently.

I am a bit of a neatfreak when it comes to keeping projects clean. (There must be others out there… A well ‘designed’ Renoise project can be a beautiful thing, lol)

…long story short. Loading samples into a project retains their original filename (even if you rename them in your sample list) in the sampler/waveform window, top right corner.

Say, I load 30 samples… If I want to lose the ‘messy’ filenames from view, I have to find a way to do it to each of the samples every time, which, when working on Renoise daily, for hours… Adds up to quite a lot of ‘cleaning’.

With previous versions the samples just defaulted to showing “init” where it now always shows the filename automatically.

As stated before, it is not a serious bug, of course - but for neatfreaks like myself, it can be a very annoying little quirk.

well, that’s your part of your problem, sir… That’s the instrument window (or at least I think that’s what you’re referencing, can’t be sure without a screenshot :)… Instruments are distinct from samples, as I’m sure you’re aware. You probably are also aware that a middle mouse click can select the instrument window and instrument, and a command+R can then rename it… Not sure how else it should behave? Do you just want them to say “init” before they’re renamed?

If you’re loading 30 samples as separate instruments, I might wonder why you’re choosing to do it that way, when you could be loading many samples into one instrument (or a few) as a drum kit, have separate modulation and fx for each sample (if you so desired), as well as independent track routing. That would be by far the neater option in appearance if you’d like to minimize the visual clutter in the instrument window… 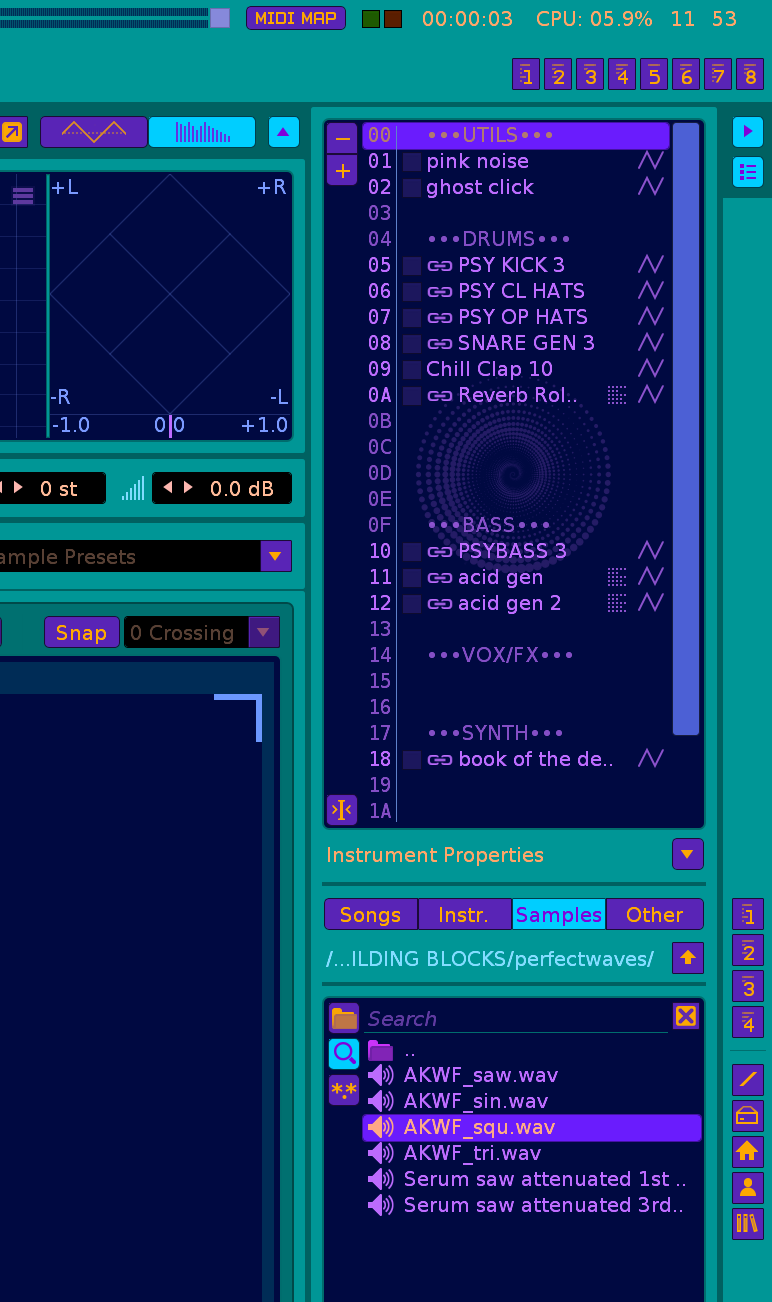 Nope not that - but the sampler | waveform view, and top-right corner there.

Yeah, would be better with the original screenshot. It was a beautiful screenshot…

@Achenar 's earlier suggestion on, saving a preset, then deleting it, is pretty close to a smooth-ish workflow. Of course still an unneeded extra step (adding up, when loading more samples) but still something that will get the job done. 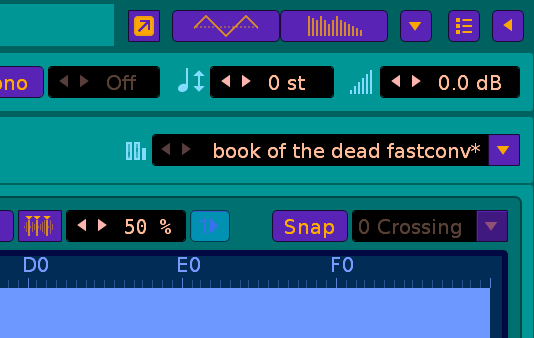 ah, yeah. got nothing on that one… I always ignore it, lol. only kinda being facetious here but… psilocybin is good for ocd

Psilocybin and OCD | The Department of Psychiatry, University of Arizona Health Sciences

Yes, that’s the one (your screenshot).