Renoise not playing with Steinberg UR22mkII on MacOS Mojave

I’ve upgraded to MacOS Mojave and Renoise stopped working with the Steinberg UR22mkII audio interface. The play button doesn’t work and I can’t hear any audio (output or input). If I change the sound card to the internal audio in the preferences it works well, but not with the interface.

I checked the Steinberg site and the interface is supposed to be supported by the new OS. In fact, it’s working with Cubase, but not with Renoise. It’s a shame because Renoise is my favorite piece of code for electronic music and this audio interface has always served me well.

Do you know any solution or workaround?

YeahLocal Chief Member, it may be more fun, but I doubt it’s more cool.

As a workaround, could you use the interface via Jack OSX (assuming that works with Mojave)? Seems a little drastic changing music application.

Aside, there are a number of bugs forming as the OS updates come in. AUs not verifying is my latest (on 10.12 Sierra). Hope these bugs are address in the next version.

Another annoyance that’s new with Mojave is that the first time you start it, you get a system popup telling you that Renoise wants to access your contacts. I’m guessing it’s because the application is blindly iterating through ~/Library/Application Support, since in the system log there’s some access control error messages about Renoise also being denied access to locations like ~/Library/Application Support/CallHistoryDB. There doesn’t seem to be any harm in denying access, but it’s a bit surprising and scary to see a popup like that, since there’s so many applications that try to steal your private data. 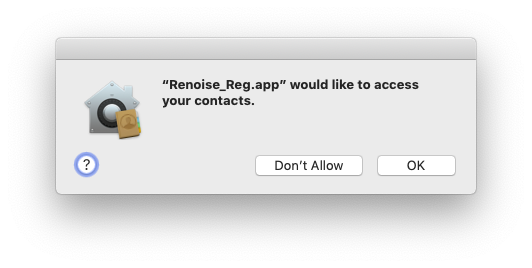 I’ve got the same problem after upgrading to Mojave. Going into settings and selecting “Apple Inc.: Built-in Output”, I’m able to play. Reselecting “Focusrite: Scarlett 2i2 USB” as described here doesn’t work, though. There’s no error message anywhere, Renoise just does nothing other than activating the play button when I press space (or the play button). No scrolling, no sounds, no messages – nothing. It doesn’t work in neither the 32 nor 64 bit version of Renoise.

I also find the asking for Contact access to be a bad sign. Even though I’m not particularly afraid of Renoise uploading my contact list to their servers, I think it’s sloppy coding and I had higher thoughts of Renoise than this. Renoise asks for access to the Calendar too, by the way: 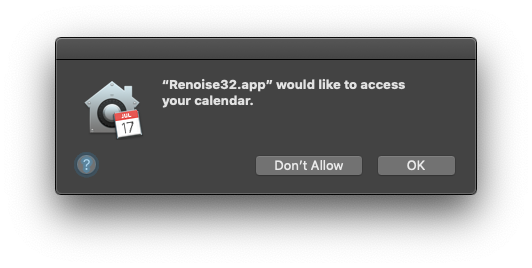 On the plus side I have to applaud the migration to Discourse for the forums. Good job on that one, at least.

Renoise doesn`t need access to the calendar. Quite likely some of your installed plugins is asking for this permission.

Regarding the “Focusrite: Scarlett 2i2 USB”: is it maybe working in the 64bit version of Renoise? Maybe the 32bit version of the driver is bogus.

Renoise doesn`t need access to the calendar. Quite likely some of your installed plugins is asking for this permission.

To be frank, Renoise doesn’t need access to Contacts either, but it does ask for it.

Regarding the “Focusrite: Scarlett 2i2 USB”: is it maybe working in the 64bit version of Renoise? Maybe the 32bit version of the driver is bogus.

It doesn’t work in neither the 32 nor 64 bit version of Renoise.

This is strange. After having Mojave installed a couple of weeks, my Focusrite 2i2 suddenly started working with Renoise again. I can’t pinpoint anything I’ve done to go from “not working” to “working” state, so I’m sorry to not be of any help to anyone, but the issue is resolved for me at least.

And now it suddenly stopped working again. The same behavior of Renoise just not doing anything after pressing play, although the Focusrite Scarlett 2i2 works flawlessly everywhere else in macOS Mojave. Sigh.

OMG, same problem. Wow, I just bought this UR22MK2 and doesn’t work in RENOISE “YET”… Let me work this

that sux, Two of my sound cards doesn’t work with RENOISE in Movaje MAC. I thought it was the Audient ID14 audio interface then, I got the Steinberg UR22MK 2. Both doesn’t work(RENOISE doesn’t play nor do you hear audio). I’m so disappointed.

My Virus TI2 is the sound card that’s working properly… I’m not switching back to Logic for this. The step sequencer is very important to me in RENOISE. . I’ll stick to the VIRUS TI2 as the sound card… It’s something I just have to accept. Somehow, it’s very very very smooth using RENOISE…

I’m now keeping my UR22Mk2 to make that as the IPAD sound card to record. that’s what I’ll use it for. Such a nice looking sound card… Mojave sucks… I use to use RENOISE with my old Focusrite 2I2 and worked very smoothly.

After upgrading to Renoise 3.2, the problem is no more. For now, at least. I’ll report back if it resurfaces.

And now the problem came back again with a vengeance. Completely unable to play any song with my Scarlett, although the internal sound card still works fine. Any help debugging this problem would be highly appreciated!

I don’t understand why my two audio interface doesn’t work on RENOISE 3.2 . I use a MAC.

In 2014 RENOISE was working well with a Focusrite 2I2. Now I own the Steinberg URMK2 and RENOISE doesn’t scroll down… I own another audio interface called Audient ID14 and that too doesn’t scroll… It will scroll when it feels like it.

but why is this? Is it a MAC problem?

Has a solution been found for this? I bought Renoise back in early April and it was working beautifully on my Mac running High Sierra. I am using a MOTU 1248 interface. On Saturday, I was forced to ‘upgrade’ to Mojave and since then, I’ve had the same issue - i.e. I get no sound, the play button illuminates, but there is no scroll. I can’t preview samples or hear any sound triggered in the sampler itself. The interface seems to be working otherwise, though it hangs for a while if I do anything regarding the audio interface in my Preferences.

None of my other applications are having issues. I can trash my preferences and re-install Renoise and then it will work again, but once I restart the computer, it stops working again.

I was mightily inspired by Renoise for the very short time I was able to use it, so I’d love to get it going again.

EDIT: A week later and I’ve just updated my studio Mac OS to the latest version of Catalina - and now Renoise is working again. This is a real relief. I have restarted the computer a couple of times and it’s still working as it should. I hope that’s done the trick for me.

Hello, btw after the new RENOISE update, my UR22MK2 is now scrolling/working.