How possible is it to import a load of samples to renoise and have it map them based on filename?

Would it be possible to set this parameter as the root note of the sample, as well as the low/high note?

Would appreciate any help with this!

How possible is it to import a load of samples to renoise and have it map them based on filename?

I would imagine (from the little info above) that it is scriptable midierror?

i think it probably is, ive got no idea where to start though!

scripting and terminal editor… ive done guru patches before but no idea what to do here.

any help is appreciated! 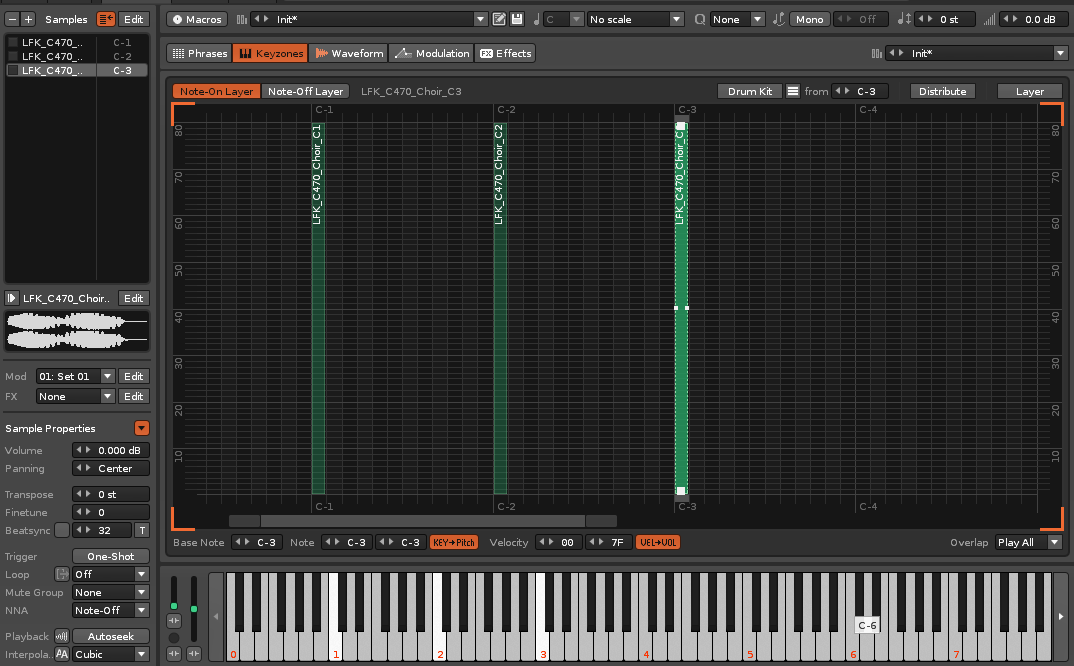 this is the result i’m aiming for

Well, the only real advice I can give you merror (from what you’ve said so far) is to look at pattern matching strings in lua and the interface from the API to the samples and keymaps in Renoise.

But to try and give you an example that you can look at yourself I’ll attach a starter. This should add a menu item to the instrument sample box (right click) ‘Import Samples…’ It should bring up a file requester. The way the sample filename is now encoded is (for example):

that should load in that sample and set the base note to C3 and the note range from C2 to F3. As you can see the settings for the sample are surrounded by two exclamation marks !!..!!

Might give you some idea midierror of how you would go about writing it.

cool thanks for your help! with this much code i should be able to work it out.

a great help…although none of the samples are importing?

Essentially, I want it to find (A-G)(0-9) in any filename and place it on that key only, and set that as the root note

Sure midierror, if you have this filename (for example):

that won’t work. But if you rename it to:

Edit: of course it would be up to you to modify the script for what you want it to do.

Right… I really don’t want to rename the files!

I’d like it to find those characters in any filename and assign it a note from that. So the data will be in the filename anyway as each file will only span one note

im very grateful for your help

Sure, I’ve written a more advanced script so annotating probably wouldn’t help all that much…and why did I just know you wouldn’t want to rename the files?

should set the base note and note range to A1. Can’t guarantee that it is exactly fool proof or anything with every filename midierror.

Cool, thanks! I’ll check it out