We agreed during 2.6 beta testing that the lines dividing lua scripts in context menus took too much space.

I can load up any old version of Renoise, and they are not there, even earlier 2.7 betas.

Well, they are back in RC1? 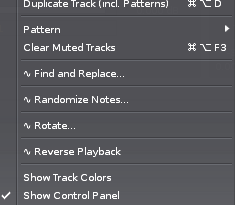 If there is going to be a 2.7.1 please look into this! While it might sound trivial, with all the scripts out there already and coming in the future this can add up quickly.

Maybe it is better to think of some kind of organizing system like we have for vst effects, so the user can rename/group tools together to his own taste. Right now, I sometimes have a hard time finding particular scripts because they’re in a sub-menu.

Well, they are back in RC1?

The grouping of script items is back. And with grouping we can’t really avoid more separators. Actually I don’t think we can satisfy everyone’s wishes here without adding some kind of customization.

See rubberband tools in SampleEditor -> Process for example, when having installed multiple other sample editor processing tools as well.

how about it only separates if there are groups made by the one tool.

is that annoying or not?

is that annoying or not?

It’s a good suggestion but Renoise can’t enforce it.

That said, I think it should be the “best practice.”

With that “best practice” in place the dividing lines are superfluous and should be removed. See first post.