Another interesting topic I think.Share here you No1 advice about music making.It can be anything,your mind set or something like finding inspiration etc.

My No1 advice.Work every day on it,doesn’t matter how much time but do it every day so it becomes second nature.This is a must for anything you want to achieve in life not just music

Agree, Every time I force myself to do a little work on something I end up getting hours of work done. You have to force the motivation sometimes

Be an open book; be willing to learn and apply your knowledge; make mistakes and learn from them. We’re all humans and what matters is we all start from somewhere and take strides to reach to the point where we are today and seek for tomorrow.

Finishing stuff is important. It is a lesson I’m still learning. Committing to ideas and wrapping them up. Even though they aren’t perfect yet. Cause they’ll never be.

Accept that. Make it the best you can within a reasonable time. And move one to the next one.

And yes, work on it every day.

My favorite advice (from another forum): 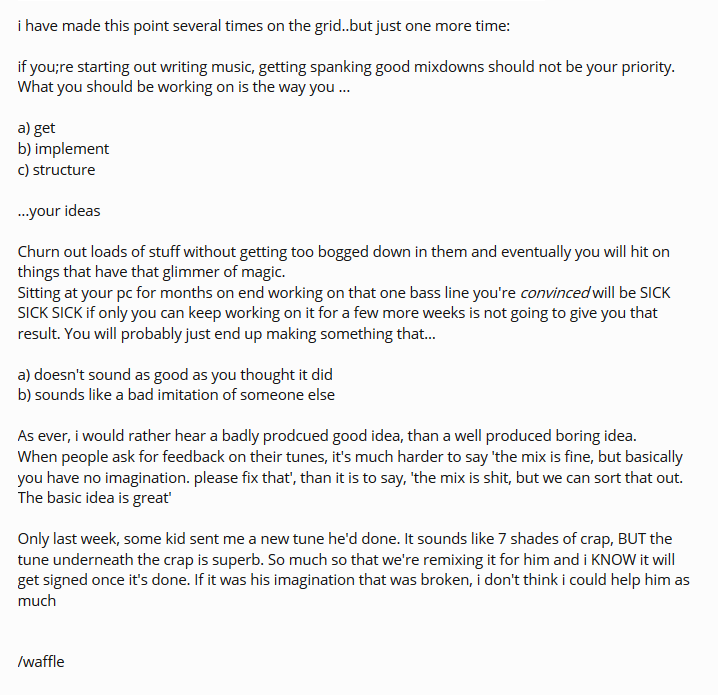 My tip for newcomers. Don’t become impatient when your results aren’t what you imagined. Just keep learning, keep working, keep practising. You results will become better one day, if you stay with working and don’t slack too much or give up too early. That is a rule of human skills - at first they will be totally frustratingly subpar, but if you excercise them well, they can grow into very capable skills. That is true for almost every skill, even those that their bearers are not especially talented at. Those just need more work and patience to shine. Even if your results are shit at first, if you love music, just keep learning and trying, maybe one day your skills will have grown into a pro level.

Don’t fuck around too much. Attention and focus are finite resources.

What @joule said, and one more - Less talk, more work.

Big fan of the “get to work” ethos. You really do have to just make it habit. Stephen King (the writer) wrote:

Don’t wait for the muse. As I’ve said, he’s a hardheaded guy who’s not susceptible to a lot of creative fluttering. This isn’t the Ouija board or the spirit-world we’re talking about here, but just another job like laying pipe or driving long-haul trucks. Your job is to make sure the muse knows where you’re going to be every day from nine ’til noon. Or seven ’til three. If he does know, I assure you that sooner or later he’ll start showing up.

Amateurs sit and wait for inspiration, the rest of us just get up and go to work.

I just happened to hear a composer, when interviewed about how he wrote something, explain how he got past the terror of a blanks staves: Just do something. Then go fix it; it’s easier because now you’re not writing, you’re editing. : )

I also try to know when to walk away from something. When it just feels like I’m polishing a turd. Sometimes that’s true. But I make a point of revisiting the numerous xrns files I’ve accumulated to see if something sounds good with fresh ears.

Sometimes it does. More likely, I’ll hear something good in the track and be able to clean out the crap parts. But again, those files only exist because I just make myself create stuff every day.

Some of my favorite songs sounded like trash and I felt like I was just putting random notes down at one point, but an hour later it was sounding great. That happens all the time, like I don’t know where I’m going with it but if you keep pressing on you can turn trash into treasure

Windows 10 has an interesting feature (might also exist in *nix, OSX) that allows you to tag files. It’s only available for certain file types by default but you can add more. So I added tagging to xrns file, and set the file explorer to show tags. Now I can put little notes with the song files. Makes it easier to know where I left off, or if there’s something promising but unfinished, etc., of if a track was made just to experiment on something (though that info typically is in the file name).

When working on an album I keep all the songs in a specific folder and maintain a notes.md text file.
Helps me track progress on songs, which ones are strong contenders to stay, which are likely to not measure up, if certain songs seem to sound too much like one another, and so on.

I find this most handy when I feel like it’s really time to get stuff ready for release, and then do some triage. I’ll wait on releasing if I think there’s a defined goal, but not if it just means fighting with a shapeless song.

And with digital-only releasing I can always add more tracks to an album after the official release : )

It’s a nice feeling when you look over your working notes and see, hey, I have six or seven tracks in good shape!