I was trying to put a piano piece together off a note sheet and suddenly realized that Renoise does not have the Impulse Tracker instrument feature that calls Duplicate New Note Action check, which is sometimes very quite necessary. That is, when the tracker encounters a new note in a channel, it not only decides whether to cut, or release, or continue the previous note according to the NNA instrument setting, but also does it depending on the previous note.

For example, if a C note was pressed on a piano keyboard, it may not be necessary that the musician wants it to go off when a different note follows up, A for instance. He may wish that it simply continues playing, as if just a different key was pressed on the piano without previous being released. However, if the new note was C, then it would make sense to cut or off the previous note, since it parallels a single piano key being pressed twice.

Would be there any technical reasons why it was not implemented in Renoise?

The NNA setting only affects notes that overlap each other within the same note column.

So, to get around the problem in your example scenario, it’s simply a matter of arranging your different notes into different note columns. 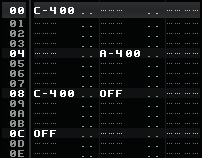 You can obviously only have up to 12 note columns in a single track, but I’m pretty sure you don’t have 12 fingers anyway, so working within these limits for a piano piece should hopefully be fine.