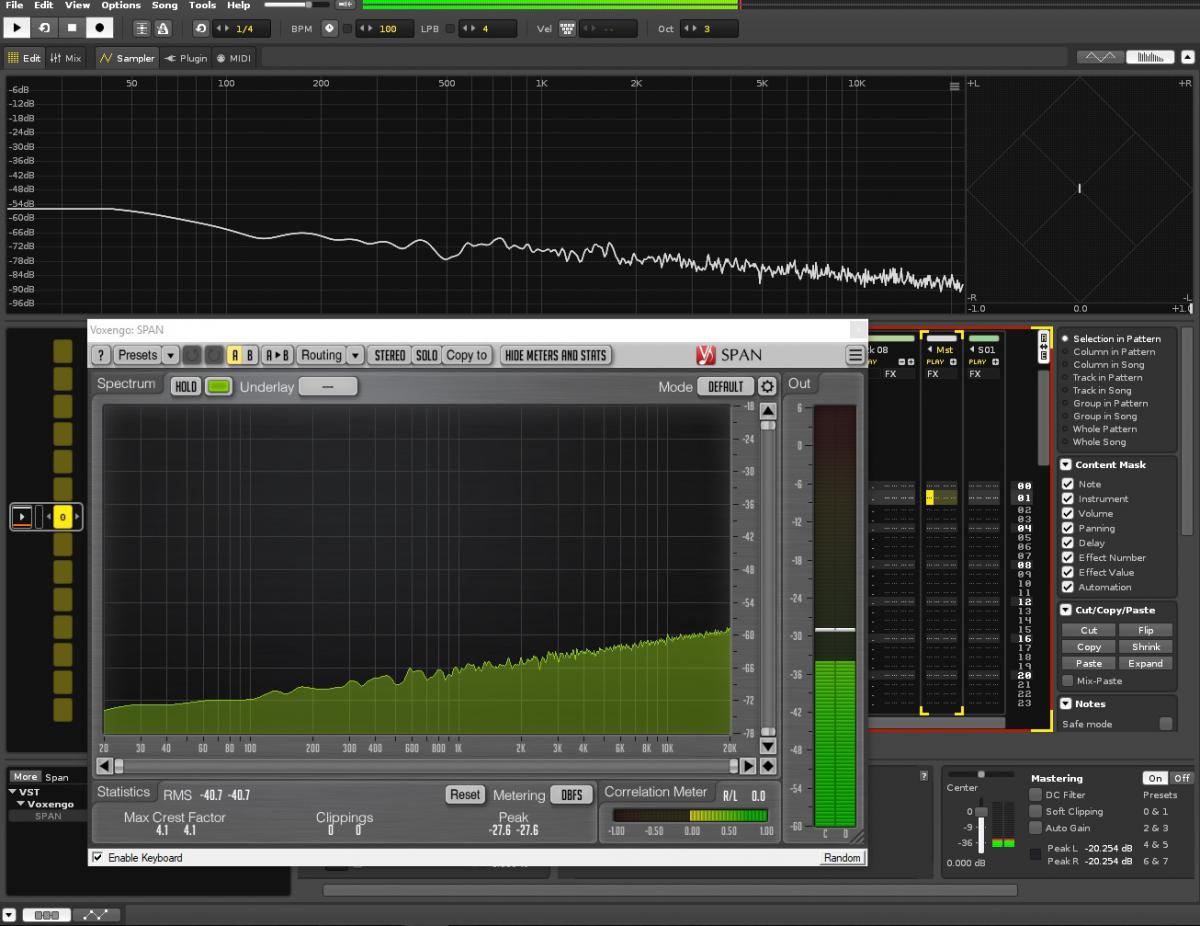 When i tried out SPAN i noticed the readings are very different. On the picture i’m just playing pink noise and i placed SPAN in the master track. I thought this should give a similar reading to the native version, but it looks kinda opposite of each other instead.

Am i doing something wrong or can you tell me why this is like it is? Is SPAN giving me completely false readings?

By comparing to the spectrum of pink noise i’ve seen in videos looks more like the one Renoise displays.

It reads quite identical to me, if you look at specific frequencies. Also check the setting “slope factor”, which is obviously different set in SPAN. I usually use +4dB. Some analysers may use a larger or smaller processing buffer, so the longer the delay, the more the post-processing.

Another point to mention is the selected “channel mix” mode. So if you have mono cancellation going on, and viewing “L+R combined”, you will see a result after the cancellation. Which could be different then in SPAN.

Haven’t used span yet but…there should be a slope in db/oct setting somewhere. It is probably set very high if it inverts the slope of pink noise this way. It will tilt the graph, only when set to zero you can read the actual amplitude of frequency components. Renoise has such a slope setting, too, in several discrete steps…setting it to 4.8 enables me to mix onto a flat graph instead of having to follow an imaginary tilted line all the time.

I tried all the presets, even high res, and the same result…all the same uphill slope instead of a downhill slope. Think i’ll reboot my computer and check again. I could swear i got proper readings from it the first time i tried it…

Have you tried with pink noise ffx?

Edit again: Now i found the slope slider in the settings and it seems to do what you explained, but i just don’t understand what is the purpose of this? Seems like such a silly thing to set this to that strange slope by default isn’t it? None of the presets had different slope settings either…confuses a noob.

As I said - setting a slope, a bit like pink noise goes, will enable you to mix/eq against a straight line in the analyser as “overall target”, instead of an imaginary sloped line. Just like you are then able to eq stuff to have the peaks just on the straight line, and all insts in busy parts summing up to this line. You will see accoustic music will often in its spectrum on average have peak slope just about like pink noise, while electronic music might go a bit brigther depending on how hot is was mastered. Ofc this isn’t the whole truth, but a very helpful thing to know when mixing. Also the slope will make the spectrogram (the waterfall scrolling display with time history) a lot more usable, as parts that have about the same energy will have the same brightness in the graph.

Edit: maybe the default slope in span ist just considered the sweet spot value for aggressive pop music or so, seing it is a considerably brighter slope than pure pink noise…

Edit: maybe the default slope in span ist just considered the sweet spot value for aggressive pop music or so, seing it is a considerably brighter slope than pure pink noise…

Wouldn’t a slope like this have the opposite effect? I mean when using this i would have to reduce the hi’s to get a straight line?

Yes you’re right of course, I sometimes mix up relativity…it just was not made for mortals…