It’d be neat to have project tabs within Renoise for smoothly mixing between songs.

I was just thinkin about this the other night. It’d be useful for full live sets in Renoise. Or somehow linking the Pattern Matrix with multiple songs and being able to switch stuff around between each.

Feel free to throw some more ideas out there.

I agree, being able to mix multiple projects would be great for live mixing, but I wonder how stable it would work if you load a new ‘tab’ while the other song is playing. Maybe for small little projects it wouldn’t be a problem or produce any artifacts, but for big tunes using lots of vst?

Then you could open all tracks you wish to mix beforehand, but that take a lot of ram usage…, also how would the midi mapping work, could conflict?

Having project tabs can be handy sometimes. Reaper has that function.

However, the ability to mix between two separate projects tabs seems like a tall order and an unnecessary feature. It’s asking for yet another abstraction / layer of mixing above all the other mixing already going on.

Personally, I would have no use for this, but for those who would, you might be able to accomplish what you want by opening multiple instances of Renoise and routing them to a separate software mixer. As a matter of fact, this should be pretty simple – Reaper and the ReaRoute driver on Windows, JACK on Linux, and JACK or Soundflower on OS X.

in the past I have proposed tabs for single song, id est: the ability to have more than one pattern opened at the same time, with only one playing at a time (for example, pressing the “play” button would stop any other currently playing pattern and start the current one)

interesting suggestion, it-alien. i like tabs in browsers, texteditors, file managers and in my trusty foobar2k so why not in renoise too?! xD

not, but seriously. tabs are great for keeping track of what you are doing… helps the memory.

Bumping the thread, because OpenMPT has such ability.
And it looks like we need to discuss the possibility of this feature.

@spacedrone808 If you duplicate the renoise app, you can run as many instances as your cpu can handle. I routinely play live sets with 2 instances of renoise using space bar sync to bounce back and forth. Playing tomorrow this way, in fact.
Also, you can set midi maps for each track across one control surface so you have everything you need for transitions, etc. I use different color themes for each instance, too.

I understand such possibility, but i’m talking about true multi-loader, like this one: 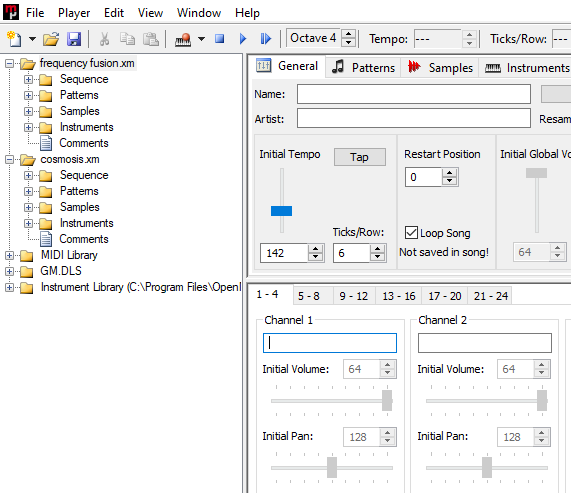 But if you ask me, i would prefer horizontal tabs, rather than vertical scheme.