This Is Where Began With Tracking

Just wanted to share this, i found my first tracker ever, it was on the Amiga 500 called Game Music Creator (GMC from 1989 17-bit software). This is where i started tracking at the age of well i think 10

After that i switched over to Protracker 3.15 of course from Cryptoburners.

Its so ironic somehow, without GMC i would probably never ended up in Renoise i wonder if andreas tadic knows about renoise.

Or Karsten Obarski for that matter. 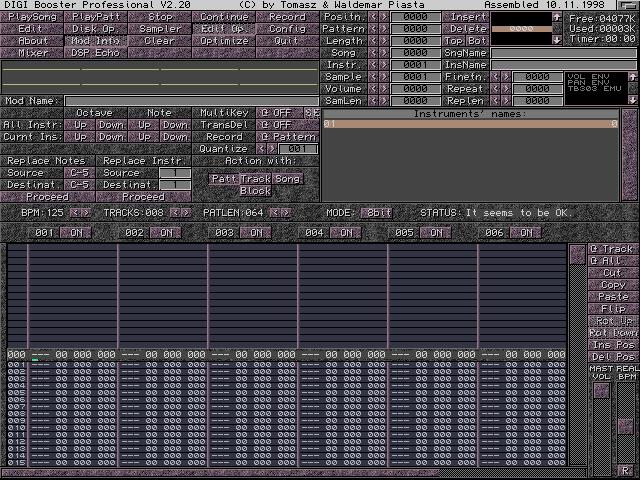 YES! I actually bought this, but IIRC I made exactly one tune with it, because I was too hooked to FT2 already… I wonder if the floppy still works… but honestly: nah.

i began with renoise

YES! I actually bought this, but IIRC I made exactly one tune with it, because I was too hooked to FT2 already… I wonder if the floppy still works… but honestly: nah.

I also bought it, even upgraded it by sending money and my original disk in an envelope

I was to alienated with FT2, DPpro came just in time.

Much later than most of you boys, but still earlier than many around here:

Wow, nice. GMC. Was the first tracker I actually used to produce something (I did have Soundmonitor on C64, but I never really understood how it worked). Got it from AMOS-PD Disk #1, I think - PD Series for the commercial AMOS Basic (Language for game making). However, I switched to MED quite fast (which is what I’ve used until FT2 years later).

I did my first music when I was 6 years old on a Spectravideo 328, with the PLAY-command in BASIC.

It was a cover of an old Kim Larsen-song (well, actually it was only a couple of years old back in 1987).

Beginners. I programmed my own sampler and replayroutines to do “remixes” on Spectrum as there was no musicprogram even available

Used a crappy Schneider cassetteplayer which I fed to Spectrums mic, add that to Spectrums awesome audiocapabilities and you can imagine how it sounded

this old thing is where i started…

Ha! Thank you Foo?! What a great feeling to look at that FT2 interface again.

Did you guys know FT2 actually runs under the latest version of DOSBox? I had to load up a few of my XMs and listen to them. It’s the real thing! Well there’s a bit of latency, maybe too much for composing, unless you have a really fast computer. But still. Wow! And Nibbles had different levels. And the score ran up in hexadecimal.