I bought Renoise a couple of months ago after fiddling with the demo for some time. The software is amazing and I don’t regret one cent of my purchase. I’m having a problem though: I’ve started countless of tracks only to end up abandoning them. It’s like I’m intensely motivated, make the beginning along with a defining melody piece, drums and the works. After that: Nothing. I never finish my tracks. I refuse to believe I’m the only one with this problem so here I am, asking this question(s):

What can I do to finish my damn songs?

How do you folks structure your creative process?

Is it too aggressive to program all the instruments from the beginning?

Anyway, I’m still learning the software and I enjoy it. I just hope I get those darned tracks done.

hey, I totally know what you’re talking about. I struggled with the finishing-process for years until it started to loosen up.

However, for me there are many ways to get me going on the arrangement process;

I have never learned how to finish songs even though I have been at it since the 80’s. I think maybe it’s because I find it a bit boring just like I thought mixing was boring untill I dedicated the time to learn it, so I think first step is to read about song structures and then make some simple arrangements and go from there.

Here are some of the things that worked for me:

Make your beat, make your bass, make your arrangement… That will help you get your footing. That is not a rule written in stone, and I certainly stray from that idea often enough… but start with kick, snare, hats, and cymbals… ad you bass instrument… and then arrange the track. “see a completed song.” basically…

Some good reading at tarekith.com

And I made an example fer you

Sure thing, I also had the same problem. Try this. Make a main chorus loop, than copy it few times, erase melodic lines in newly copied patterns and stuff and make new lines for verses, intro, outro. You may do it a quickly, little carelessly, just to imagine how “may it sound”. Than try to improve those freshly made lines to the shape that they “have to sound”, just make them the way you want them to sound. In my case, by this time the song is almost finished, it just needs some little variations (noises, crashes, fx) and it’s done.

The point is just to expand song quickly and not fall into boredom by listening your great loop over and over again so that it starts to sound whack, and you’re tired with it.

I’m going to be really contentious and suggest looking up a bit of music theory if you haven’t already. Musicians have come up with standard chord sequences for songs for hundreds of years, and so a bit of wiki-research might help get you through the block. It sounds boring, or - worse - like plagiarism, but I was really surprised how many songs I loved fitted into really common chord sequences once I started poking around.

Most of jazz fits into the “ii-V-I” pattern… Think about it… An entire school of music founded on one sequence (with variations in voicing, speed, pitch, arrangement etc. of course). Also look up the circle of fifths: most baroque follows that sequence!

Once you know these things your creative arsenal will be far bigger. Even if you’re trying to be experimental, knowing what is cliche is helpful. It gives something to kick against.

If you already do know, then the former points are all really good, too.

I used to have a copy of this book… I spent years studying it, and reading it. Its unfortunate to me, that my family seems to have NO RESPECT, for anything having to do with my music, and I’m constantly in the position of having to replace the things I buy! Arrg… But without flaming, I’d suggest that, “an entire school of music,” has not been founded on, “one sequence,” and this book may give anybody an insight into the complexity that is American Jazz 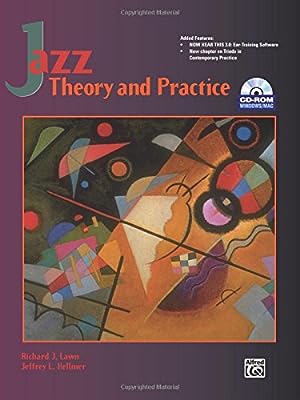 I used to have a copy of this book… I spent years studying it, and reading it. Its unfortunate to me, that my family seems to have NO RESPECT, for anything having to do with my music, and I’m constantly in the position of having to replace the things I buy! Arrg… But without flaming, I’d suggest that, “an entire school of music,” has not been founded on, “one sequence,” and this book may give anybody an insight into the complexity that is American Jazz

You’ll have to forgive my ‘new musical convert’ enthusiasm for the bold claims. I’m still at the ‘Oh crap! I can see the universe and it all makes sense now!’ stage in learning about jazz and music theory in general. I hear some people react to drugs and sex in the same way. And giving up smoking, too.

I should maybe have pointed out 12-bar blues ‘111144115411’ instead, rather than just the common cadence of 2(or 4)51. It is still massively oversimplifying, of course, to make a point about song structure.

I’ll also amend my overall point for accuracy: large portions of entire musical oeuvres rely on a small number of well-trodden sequences without sounding alike or being considered boring, and are worth learning about - even if you never use them!

Thanks for the book tip: I’ll pick it up - and probably make my clarinet teacher happier with me, too.

to me, the working tip is automations (mainly volume)

this does a perfect job…

(even with the same cloned pattern all along the song)

–>> automation (instead of mute/unmute) makes the song more “realistic/alive”

these things, btw, offtopic dude you have a sick gear list