In addition to being able to organise the Browse tools list by Title and Rating could it be possible to have a date modified/ added option. i.e. so you can list the most recently added first/ last?

edit: on this page:

Thanks, it seems to be the default now, no need for extra column!

(unless I have been thick and just missed this before!)

I changed it to Tool post date, was Title/alphabetical/ascending before. In previous stages there also was a date column, but that makes the table too crowded.

Does the job now!

Can we get some sort of outline around or delimiter between the tool info and the comments?

Right now, it’s hard to distinguis the comments from the main blurb. Example:

Can we get some sort of outline around or delimiter between the tool info and the comments?

Right now, it’s hard to distinguis the comments from the main blurb. Example:

+1. Also if there is no uploaded picture maybe a default image could be shown instead to confirm you are looking at a Tool`s page e.g.?

I don’t know if it is intended, anyway I have noticed that, in the tool page, only the first decimal of the version number is shown (for example: 0.45 is shown as 0.4)

New default icon is great! What I was thinking was for the actual tool page aswell?: 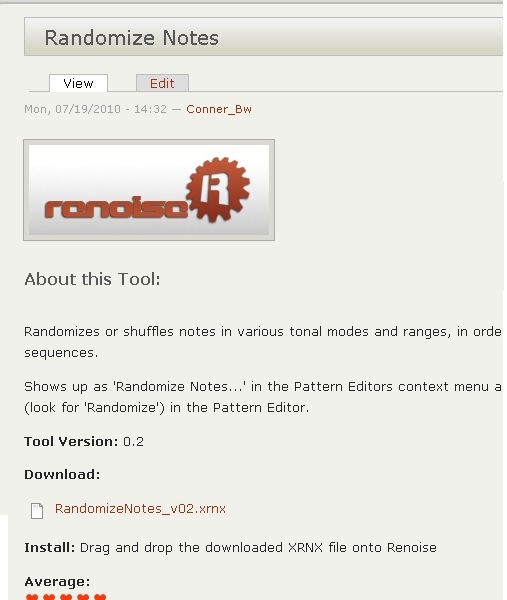 Nevertheless I’ve changed the display precision to 2 digits to the right of the dot.

yay! I really thought 1 digit was too coarse, too.

So people with eleven fingers have more fun then?

why withhold bugfixes or small additions? especially when you never know who might start to use your code as a base for something else.

and having to increase by 0.1 everytime you fix 2-3 small bugs would suck IMHO. to me,

of course in practice that hardly ever works out, but still…

Can I request the same type of delimiters you have going for the tool pages, e.g. the two colors and the horizontal line? It’s hard to read at the moment.

In the comments could the script author`s name come up a different colour to users names? i.e. blue or something

This would make it easier to scan for things like known issues the author has already replied to etc.