I recently unearthed an early mock-up of Renoise I designed in 2006. It features an additional column that displays long vertical waveforms. The idea was to visualise the use of long wavs, typically stems of vocals and long instruments recordings alongside Autoseek.

Would you have found it useful in your workflow? Opinions welcome 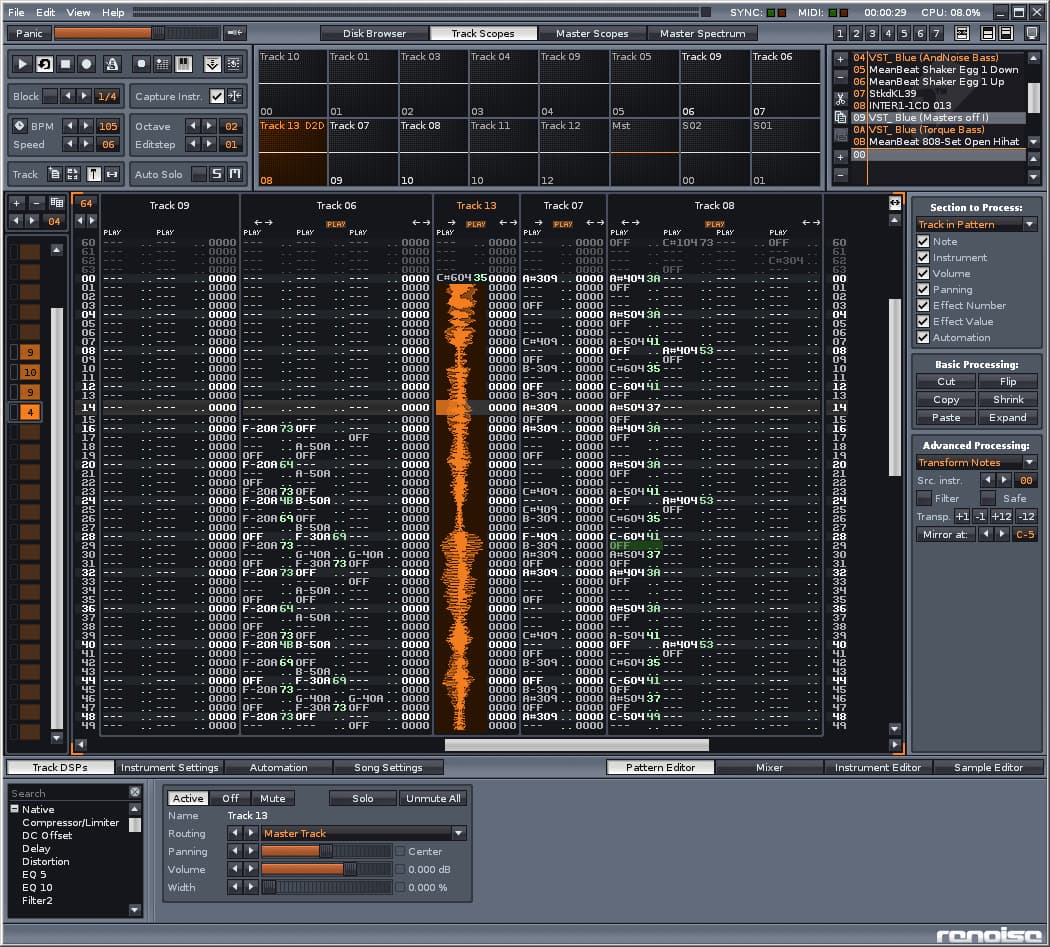 Link to a higher res version

ya, it would be cool to have the option for more eye candy & visual representations of waveforms in the compositional space. Might be useful for detecting clipping & transient issues as well… buuuuut, totally not necessary, imo

Agreed. That said I do find myself hunting for sections on long tracks and a visual cue could sure come in handy. It’s a total subversion of tracking that said, but then again original C64 and Amiga Protracker tracking were never intended to deal with long samples.

right. I’m grateful the playhead registers on the waveform view while playing a track. definitely helps with getting one’s bearings over long sample playback

Would the waveform update in realtime depending on used track effects and/or when you add or delete samples/vsti? Or just the sample instruments waveforms shown verically? Mixed if there are multiple samples in the same track? Are these waveforms saved in some kind off offline format, like peak files with certain audio editors?

I don’t mind it, but if pattern command effects and dsp are not taken into account, solely the instrument sample waveforms without realtime changes, the vertical view might not make much sense.

No, this would be just a “pre” view of the entire sample in Autoseek, which then is played with whatever dsp’s or vst of the corresponding track.

Yes that was my intention. It’s quite a pain to work with a multi track stem source files in Autoseek alone, you cannot see anything at all and it’s just guess work and skipping through patterns to find where you want to be. At least thats how it was for me.

Yup, this is the one feature I’ve been dreaming about for the last 10 years. Would be extremely helpful for the workflow and to get a better general overview of all the things going on in a project. And I guess it would be just an option/toggle on each track if you want to have regular tracker view or waveform view (or both).

I definitely would love to have an option to see the waveforms of multiple tracks in some way, but I find looking at the vertical waveforms is just as comfortable as reading a text from top to bottom and not from left to right, which is absolutely horrible. But even vertical waveforms could help sync tracks, or navigate in the project. So if its not very hard to implement that would be nice to see in the future versions. But also I’m happy with Renoise as it is!

Disclaimer : This it NOT a feature in development, nor is it something that Renoise is working on. It was a UI mockup I made 16 years ago, when using long mutipattern samples was a headache (I believe it pre-dates Autoseek, which was sort of a step in that direction).

@Jonas Djeroek you make a valid point. Its nice to have a waveform but what happens the second you add any command instruction in a track.

This would imply making a “locked-in” type of track where it would only with no direct effects except for post dsp’s and vst’s, be it on the tracks or sends the wav is routed to. Its the price to pay to have an accurate representation.

One thing for sure is, vocal and long instrument based (remixed with stems) remain a headache and this (perhaps an over simplified) way of fixing it.

Any other ideas are welcome, as I have absolutely no doubt see in he waves as they run over several minutes would be pretty damn useful