Since “dunno exactly which Renoise update” we can use midi plugins to control other instruments in Renoise. For example midi arpeggiators like the free mucoders Hypercyclic (https://www.mucoder.net/en/hypercyclic/); 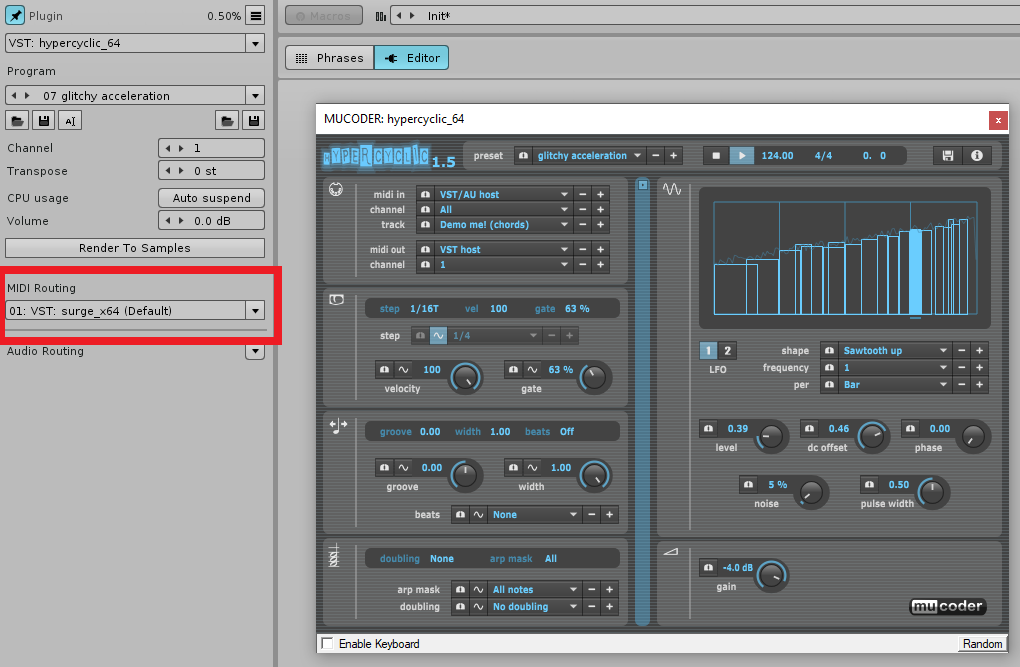 strong text
For example in above screenshot I set it up to control Surge vsti.

Since these type of plugins are supported I hardly see any mentions on them in the forums. Is anyone using them, a secret weapon thus unmentioned? If so I’m curious which plugins and how

. Sound examples would be great!

I feel it is a powerful yet undervalued feature that could use more attention, besides experimentation I don’t use it a lot myself. Think these could help me create better progressions, less static notes in melodies. I read on kvr that currently we can’t send output from these type of plugins to multiple midi-outputs, is this why folks skip using them altogether?

Hi
I’m using Numerology 4 with Renoise, do you save your plugin note entries in Renoise? If so, I would be interested to know how you do it, in my case I do it through the midi input of the instrument in renoise, with the routing from the Numerology channel, I can’t do it like this you?
I also use the applications from the ipad for osc, there are fantastic applications for arprggio, chords step sequencers … A very interesting topic that you have proposed

The free Arpeggiator Blue Arp is quite famous on the forums.

Using VSTi plugins in combination with an instrument’s samples is a bit of a “hidden feature”.

Renoise has a few “hidden things”. Like the need to select “None” in the plugin list to remove the plugin from the instrument without deleting anything else. There is simply no “X” button to close. It also doesn’t appear in the instrument drop-down menu (instrument box), although selecting “None” seems like a no-brainer. Maybe it is a way to protect the loaded plugin.

Well, I would be much more interested in midi fx plugins, altering the midi/note stream. I think even an arp could be done in this way? But that would require some fundamental addition to the audio stream workflow, having midi side-by-side. Maybe they didn’t do this, because Renoise note data is not in midi format or something… So midi fx would only work with midi live input so far.

So Renoise might need a note data to midi data live converter… not sure if you can convert this live at all. I wonder how the other DAWs manage this.

It doesn’t matter , the input data in the tracks is processed by the midi instrument , just like an effect
Here I have a few notes in a pattern , the instrument assigned is loomer architect (modular midi environment)
Architect has it’s midi input from the host ( so the notes in the track ), then goes into an arp and outputs it’s back to the host .
Then we choose which instrument the midi plugin controls from the appropriate renoise tab

The only downside in renoise midi routing system is that a midi plugin can only control one instrument .
Architect can control as many instruments as you like , but not in renoise , I have to load a new instance if I want to control a new instrument
I asked for this feature since the release of the midi routing way back 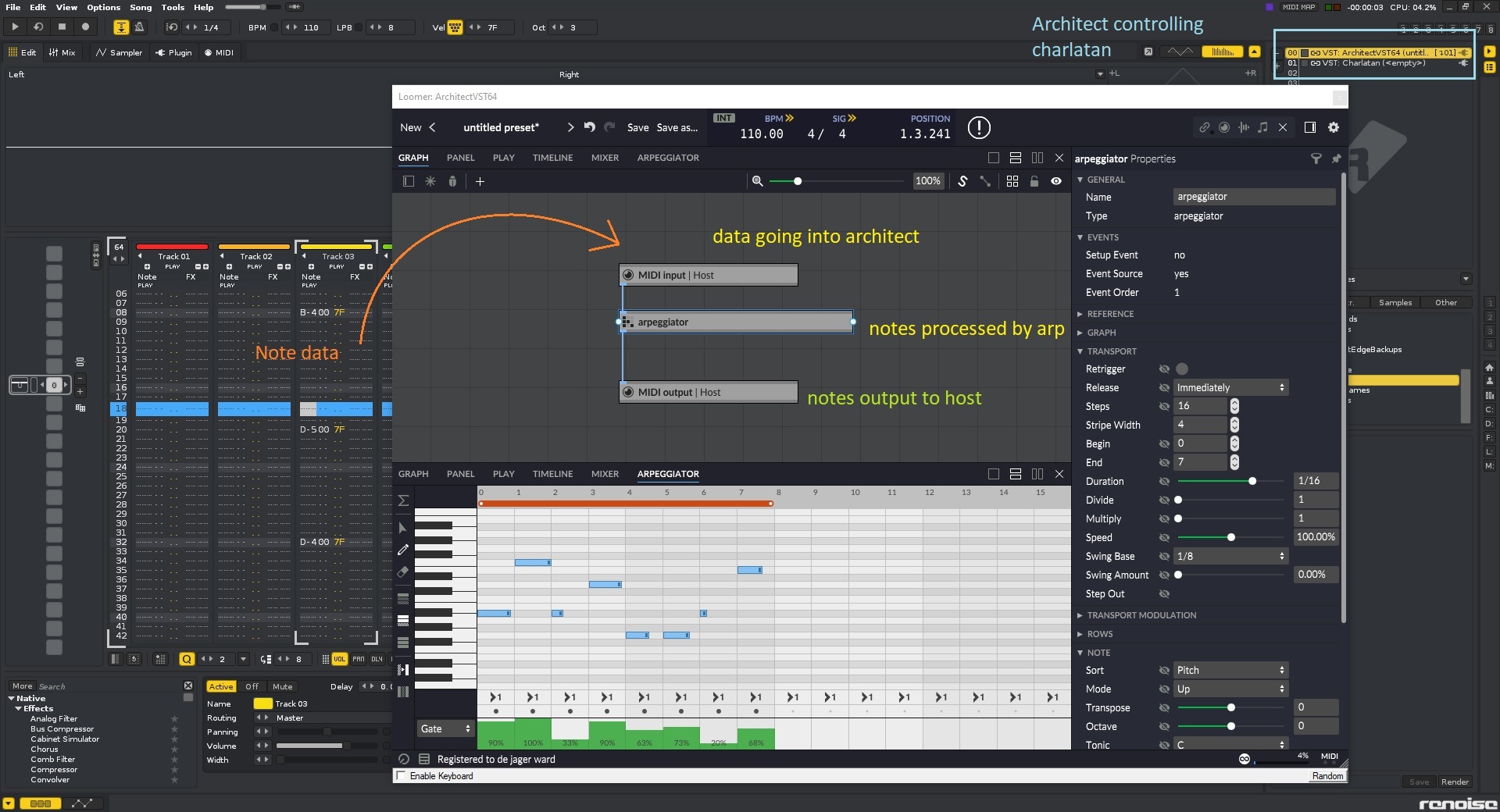 Well, that looks very powerful, but I am more interested in small, granular midi fx tools, for example a midi shuffle or scale filter. I really like the Bitwig’s stuff, except a midi shuffle is missing.

chord chopper Nora can be used nicely for progression building 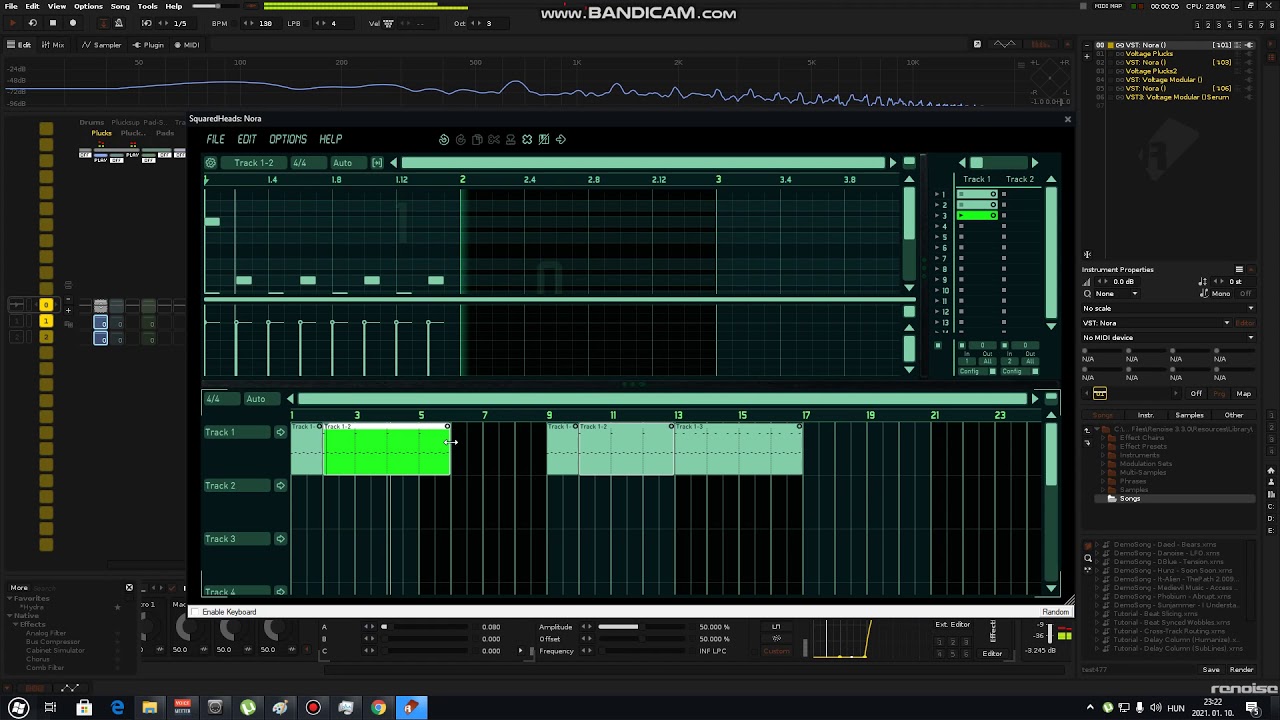 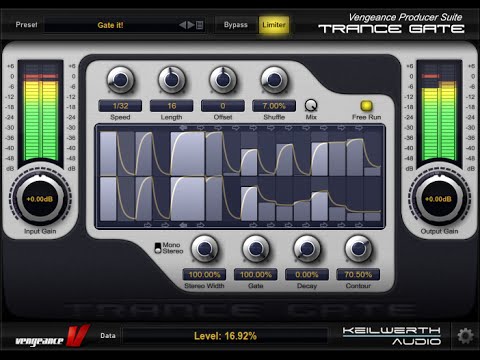 A MIDI plug-in that I often use is Stochas. It is a sequencer with added probability functions. It looks like it is from the same developers as the Surge VSTi, and also free of charge.

These are included in architect as simple building blocks , more then 300 modules to make anything you desire
yep , it’s expensive but totally worth it , I mostly use architect standalone it’s amazing for jamming etc…great sequencers etc