Oh… it sounds like a troll topic that will go into a flame war, doesn’t it ?

Well it isn’t. Because I really asked myself this question : what would a 3.3 really be about… because 3.2 is actually a pretty damn GREAT update that solves most major problems that were left.

VST 3 ? I very much encourage you to read the “Please add VST3 support” thread. TL;DR : it wouldn’t improve anything, and there’s no plugin that is VST3 only (edit : I was wrong, eg renoise rack… so yeah it’ll happen more and more)

Piano Roll ? I’ve written a topic about how hard it is to break a fundamental design choice (renoise being a tracker) and it wouldn’t bring anything to the table. Let it be a tool.

So what else really ?

Multi-tracking. When you think about it, this is the ONE thing that prevents renoise from being a complete DAW. You can do everything and beyond with renoise… but if you have 3 mikes, you got to buy another software

Better Duplex integration : to me, this is the second thing that makes renoise stand out in the wrong way, the hardware/software integration is rather frustrating. We can’t hope for a push/Ableton live experience, nor we can expect big manufacturer to notice the small Renoise… but duplex kinda feel like a half baked cake. It’s almost amazing but very limited. Same goes with custom tools… user maintained tools often go abandonware.

Better midi automation : the automation is limited to 2 per track… which is… limiting.

MPE : this is niche, for sure. It almost didn’t make the list. But renoise capabilities with a 5d controller… this could be nuts

I’d like to hear you favorite feature requests but i’d like you to not rush on your keyboard but rather think for a while about :

Proper audio routing. As in, for example, be able to use the side chains or summings in many plugins.

Also it would be cool if audio levels could be directly obervable inside a tool, but that’s rather secondary.

Renoise 3.21 really is the best DAW and also the best tracker in the world, obviously, fool. Everything else simply is blasphemy. But! It could maybe (actually of course not, since it is perfect) benefit from a sidechaining mechanism and a parallel container device. Then I really couldn’t imagine anything else, I already engraved “renoise VST3 sidechain” into my gravestone (our family has nothing but an institution for family graveyards, very german).

EDIT: This wasn’t meant rude, I just was drunk.

Maybe Taktik plans to add VST3 including sidechain, since VST3 somehow already implements an extra sidechain mechanism, so then he simply could use that… VST3 must be hell to implement into a DAW and sidechain is a challenge for DAW routing and CPU multi-core scheduling, I believe.

Actually…improved Doofers, right ?
If you add a Y axis to stack plugins and dry/wet buttons (and mandatory volume/solo/mute) for each slots,that should cover it

It would be like 4 doofers in parallel with an arrow to flip through the different signal chains.

That seems very “number 1 compatible” to me.

parallel doofers and “sidechaining” would be amazing

Honestly I think Renoise is about 99% perfect software. I can’t imagine ever wanting to use another DAW. However, I can also probably think of a few dozen minor tweaks and maybe a few major ones, but overall, I could use the software as it is for another decade easily.

Mostly concerned with keeping up with bug fixes as the various OS’s keep upgrading, changing the way they do audio or deal with programs overall (looking at you, macOS).

there’s no plugin that is VST3 only.

Looks like Reason Rack is VST3 only. I personally don’t need it, but there seem to be some interest.

Multitrack recording would be great. I’m trying to produce music with my modular and every time I have to use ableton live whenever I want to record something.

To give you an idea just how real they were:

It’s nearly 26 years later… why doesn’t Renoise have this for every note column?

You musicians probably think you’re sooooo cool, with all your fancy schmancy music making features that go over my head… “oh, I’ll just sideroute you the URL of my 800 kickbarrels, no problem, that’ll be a thousand dollars”… and I’m not being disrespectful or nothing, but with all the parties and the photo shoots, haven’t you lost track of what really matters: colorful things that move to the music?!?

It’s nearly 26 years later… why doesn’t Renoise have this for every note column?

Well (just throwing this out there) I would imagine that the execution overhead from the Amiga’s perspective to do those ‘4 colorful bouncing (hardware sprite?) meters’ is fairly low in comparison to what Renoise would have to do.

Renoise has to redraw the pattern all the time anyway, might as well draw something pretty while it’s at it >:[

With apologies to XTD, I rest my case

Just to clarify, I’m not saying it isn’t possible on a ‘modern’ computer. If you want ‘eye candy’ on drawing ‘bouncy colorful vu meters superimposed on the pattern’ per frame then that is up to you. However I’m sure you will pay a price on CPU usage (could be used for say audio?) I believe Renoise has to shift quite a bit of ram drawing the pattern per frame as it is at the moment. Personally I wouldn’t add any more ‘eye candy’ drawing. But it’s just my opinion.

Sure, I have mostly free CPU with Renoise anyway, so I wouldn’t mind having the option (!) to use 0.1% more CPU on seeing where exactly sounds are currently playing.

Kinda like the little lights showing which instruments are currently playing, which are surprisingly useful for getting a feel for what is going on at any given moment.

My two favorites would be by far improved automation handling, like i wanna just MIDI learn, click record and have some fun without having to go through the automation devices. Also improved MIDI handling. There is quite a lot of plugins out there, which allow you to drag MIDI into the main application, currently it’s stuffed at the end of the pattern sequence instead of where i actually want it. There is even MIDI plugins with Piano Rolls and simply allowing to drag the content to it’s proper place could silence the request to some degree for people wanting one to work with.

Renoise doesn’t have to do everything what other software can do, but some more integration with the outside world would be nice maybe, thinking of Melodyne ARA here or Ableton Link, or even VST3 with proper routing between plugins. Make Renoise a tool which lives happy next to the rest of the crowd instead of being the lonesome outsider.

Besides that i do think Renoise has come a long way and is very cabable already. 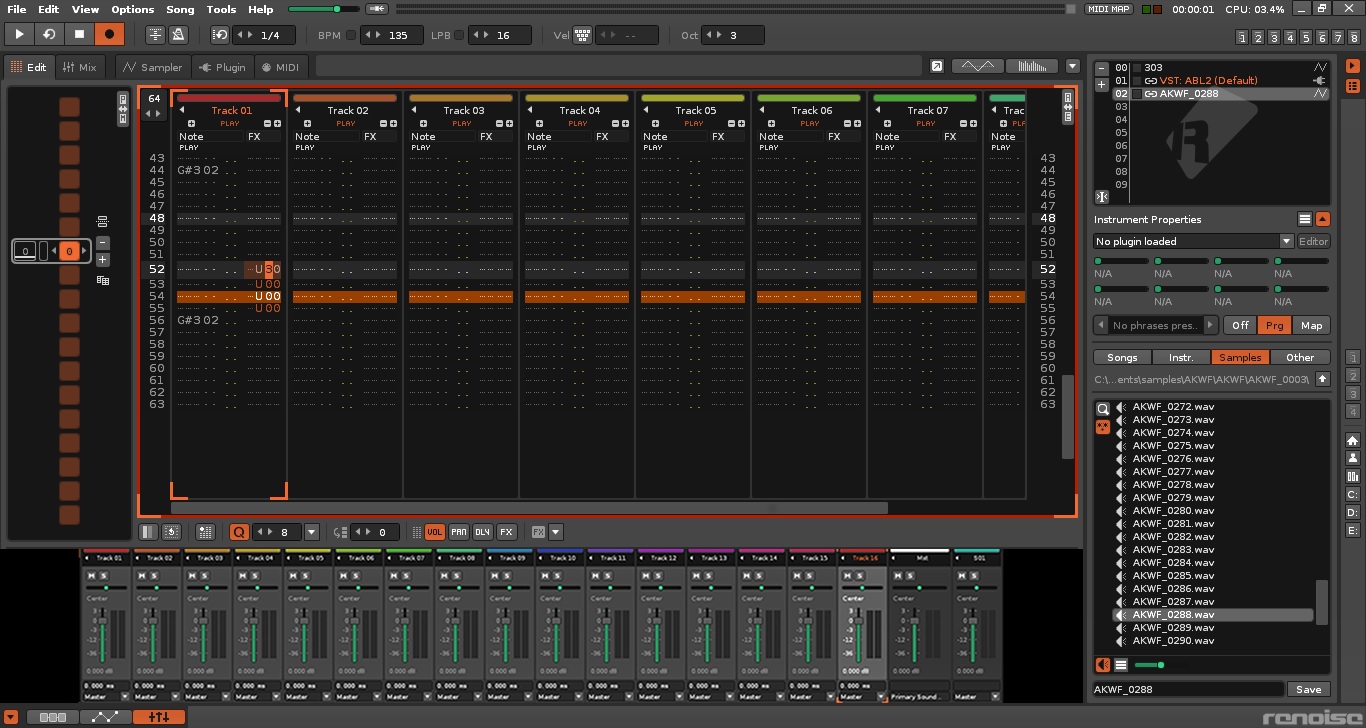 Before this thread turns into a vu-meter debate : let’s note the idea : a way to see levels on or near the tracks. Might probably be made as a tool. But a good idea

People talk about programming as though it is so easy. Just do this, just do that…Programming is so easy peasy, why not write your own tracker program, then you can put as many vu meters and improve the automation editor to your hearts desire.

That’s not the point. It’s just that maybe someone will make a tool before renoise gets an update

I can tell you now Tumulte that it would be difficult to write a lua tool that displays vu meters in Renoise.