What is the difference between "Master Track" volume level and Master level in "Mix"? 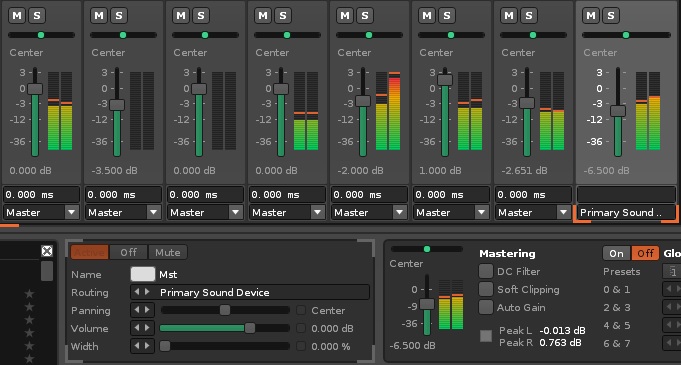 In the picture, the channel on the far right is the Master channel in the “Mix” section, while the one below is the “Master Track” DSP panel.

The question is: What is the difference between the volume sliders in these two? Even though I get it down to -6.500 dB in one of the sliders, the peak is above -6.500 dB (as seen in the picture).

you’re obviously expecting the behaviour of a limiter, but you’re looking at gain sliders.
you can either set positive or negative gains relative to the input signal.
if your input signal is +2db and you set the master gain slider to -1db you will end up with 1db and not with -1db.

What is the difference between the volume sliders in these two?

taking a look at the upper right corner of the mixer view, you will see these two buttons:

hope that makes sense to you. lemme know if not - good luck.

If I understand your question well: it is the same with the master track as with any other track: there is a volume control at the start of the chain (leftmost pane in the horizontal strip view) and a volume control at the end (rightmost pane, or bottom slider in the mixer view). The former is automatable via pattern commands or curve strip. The latter is not. Other effects are always inserted between these two.

What can be confusing is that that leftmost pane is called the “mixer” in the pattern editor’s commands menu, but only the other one appears in the mixer tab.

Faders don’t work that way. Tuning to -6.5 means whatever gets into gets 6.5 substracted from its level. Not like it will be pushed down to -6.5.