What would you recommend as a limiter?

Here is the rendered view in audacity: 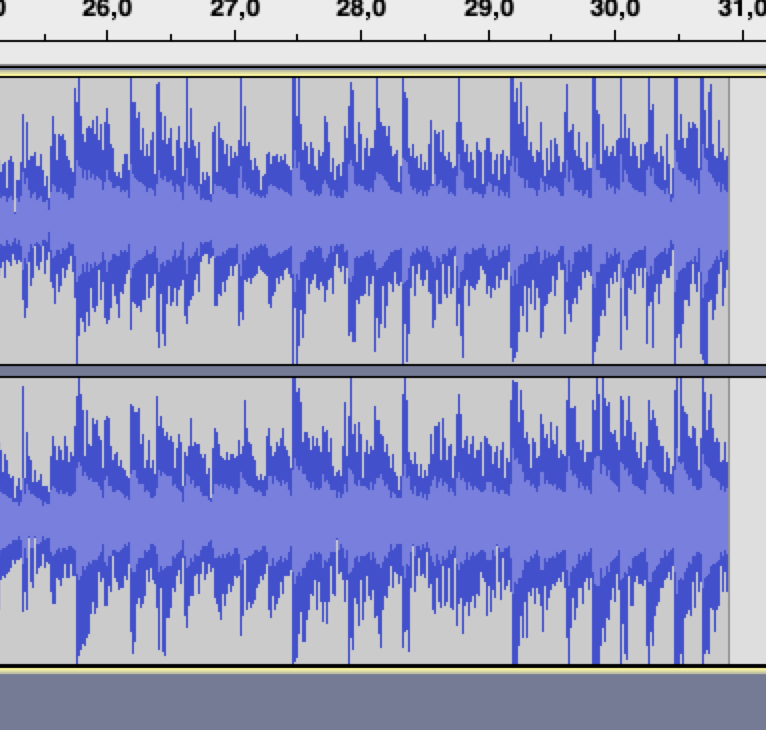 I think in this case a limiter could help on the snare, but I wonder if this is possible to do with Renoise native effects avoiding saturation (just attenuate the signal, not cut it)?

Or if there have external tools/VSTi/AU recommandations you can also tell about of course.

have you tried using soft/hard clippers to control your dynamics ??? 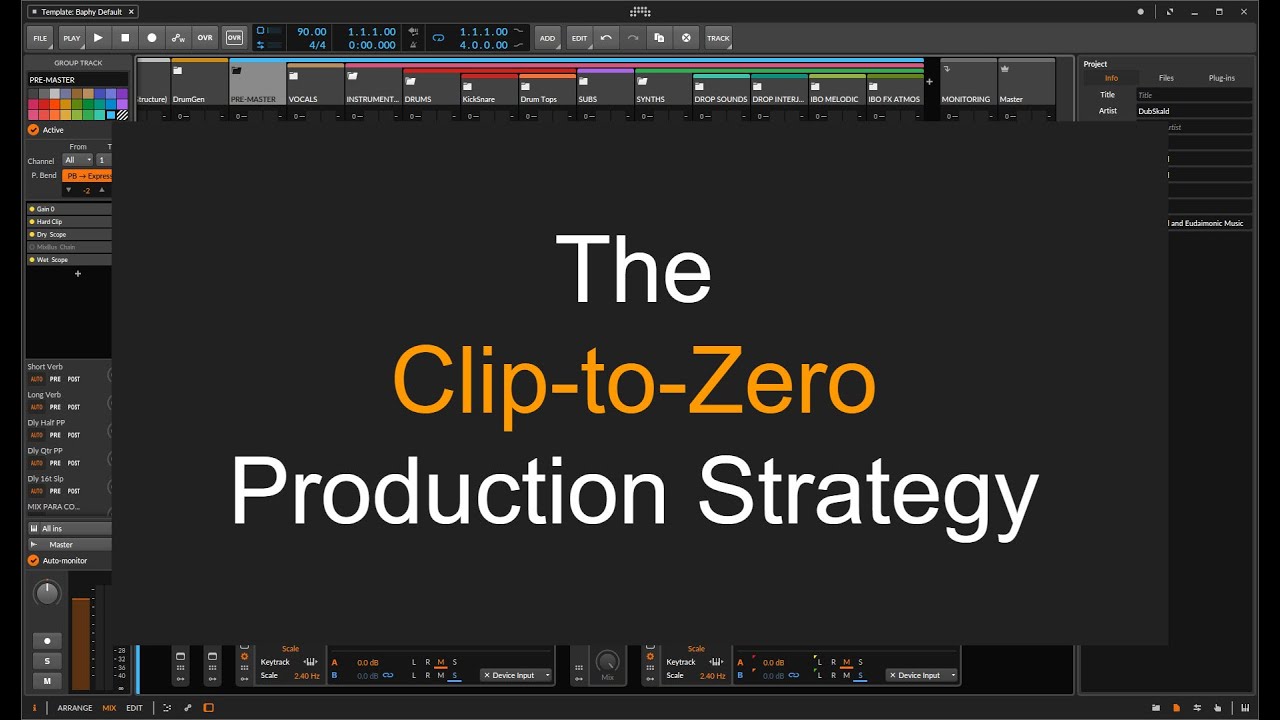 Yes I think that’s it!

Isn’t that what a good limiter can do?

well i’m not the most indicated to talk about this ! but essentially the difference is that a pure clipper doesn’t impose an envelope like a limiter with attack, lookahead and release controls

FYI i think in the video baphy mentions that pretty much every limiter has a clipper under the hood !! some of them just don’t show it to you

This is how I tame peaks for percussive instruments:

Use some waveform view or trained ears… Make sure you see/hear the peaks of the snare, and also what the desired level/headroom for the snare is.

Then use a standard compressor device on the snare track. It will serve as a peak limiter. Crank ratio all up so it is a hard limiter. Use the fastest attack, and pretty fast release. Dial the threshold so you hear/see only the peak affected, and the body of the snare still sounds the same. Dial the release so it is an immediate effect, and the peak does not squash the body.

Then carefully adjust the ratio until the peaks are just right.

for clipping purposes I use the freeware Gclip; 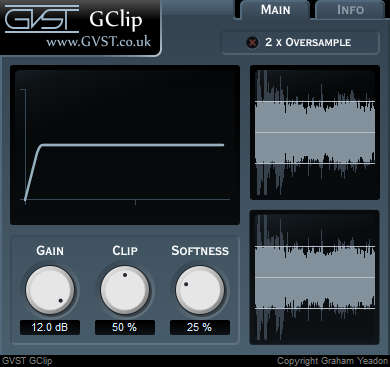 also has oversampling and way to ‘soften’ the clipping

Ah this one seems good!

but I think this is the tool I need!

I use the free version with the “communistic UI” which does its job ! 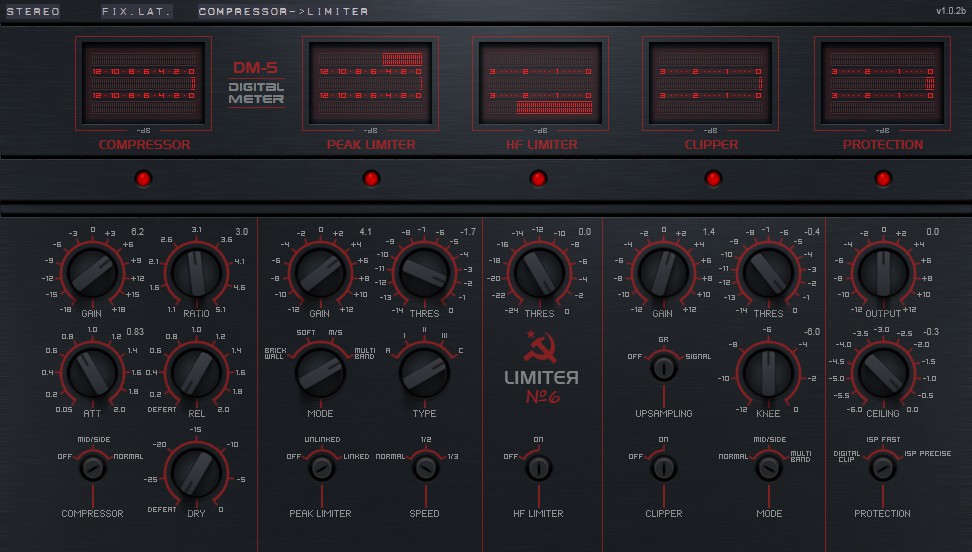 I definitely recommend this, but in your case I would start by limiting the snare only, not the whole track.

edit: the manual helps understanding all. There is even a multi band option… really awesome free vst. I use it on the master track each time.

This UI seems perfect to compose the soundtrack for the next James Bond! 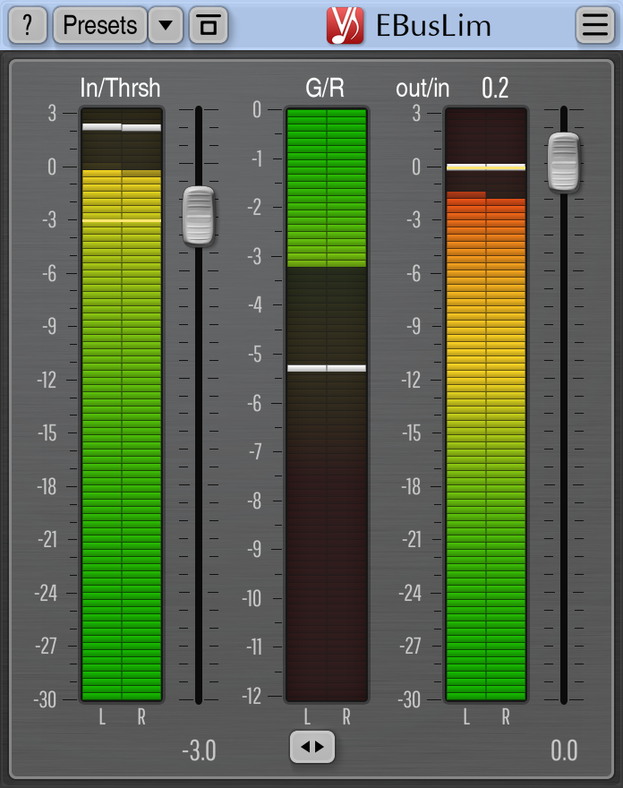 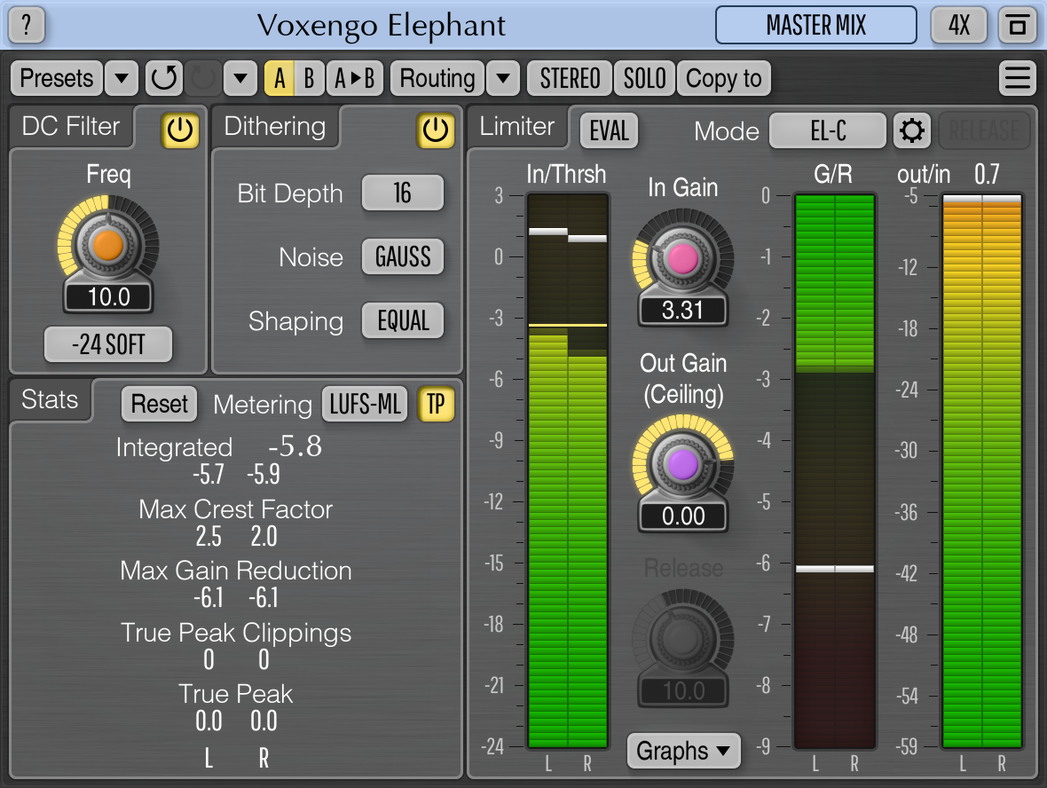 Also, out of curiosity, why not just gain-stage that snare?

Call me a noob, but what’s the difference between the Renoise maximizer and all the limiters listed here in this thread? They all do the same, right? Maybe a few details are different, just like compressors are working slightly different, but basically they all do the same. Or what am I missing?

Probably not much, I have used T-Racks clipper before Maximizer got included in Renoise so that’s what I am still using that but they do the same job… maybe there’s a difference in saturation tho but not sure how much that matters

Hardware emulation limiters often bring a sound coloration (like crisp or heat) you won’t find in a pure numeric limiter, but that’s a matter of taste (and goal)

Limiter6 has a multi stage approach, it’s basically a compressor followed by a limiter and a clipper at the end.

You can for example set the compressor with slow attack to handle roughly the changes in level in your track (fixing too quiet intros for example). You can then set the limiter with a very small attacks to fix the peaks. There are other options such as multi band, this would prevent that all the frequencies gets “turned down” if there is a peak only in a frequency range for example.

Of course you could use native devices instead… the multi band thing would be annoying to set up though.

maybe there’s a difference in saturation

I don’t think the maximizer works like a clipper. If I see this correctly the maximizer preserves the peaks (just like a limiter), it’s not clipped. Maybe using both would be worth a shot. I never used a clipper, instead I have always used the maximizer and boosted the signal before the threshold. But StandardCLIP and GClip are looking good, let’s see if there’s a difference and how using a clipper is affecting the result.

Sounds interesting, thanks. Do you have any recommendations?

Thanks for your explanation! It’s a great tool for sure, there were several recommandations. What bothers me is the “all in one” thing. Wouldn’t it be better having a compressor, limiter and clipper separately? And why is the clipper at the end, shouldn’t it be in the middle followed by the limiter? Just thinking…

Edit:
I’ve found this interesting article for those who want to know the difference between a limiter and a clipper and the different types of clipping.

Sounds interesting, thanks. Do you have any recommendations?

I don’t know enough about compressors/limiters to describe what each one provides in sound signature, but you can try some, for instance a nice & small french company release high quality plugins you can try for free with very good emulations of legendary hardware: All Products - Pulsar Audio Plugins

Try it at your own risk, you might give some money if you love it…

I often use the soundtoys decapitator or radiator to get some crisp on my tracks … Very good (but quite expensive) plugin suit (great sound and low CPU usage…).

Also, out of curiosity, why not just gain-stage that snare?

This, totally this. Or why not just use a surgical notch EQ to control a precise frequency range to attenuate (i.e., the problem area)?

I get that a limiter is super easy (just slap it on and forget about it) , but isn’t it better to take a minute longer and precisely shape the sound to your liking?

Or am I a dinosaur?
Get off my lawn!