After some time in background, when I alt+tab back to Renoise and hit play or undo, it hangs for some time and does nothing. If then I click this butoons again, it hangs again. Only way is to restart renoise.

It was like this since spring, when I first went to new version. I thought it may be connected to screen resolution or tools, but when I cleared “scripts” directory, it still hangs
I’m on win 10.

Can I also grump here about other irritating behavior of Renoise? It doesn’t save hotkeys. I have english/russian langs and I saw topics regarding the problem dating 2014. I don’t remember having this problem in 2014 but now I do and advices of those topics don’t help.

Also, small but irritating. I write code in Microsoft Visual Studio. Usually when I alt+tab from any other app back to VS, cursor is placed in code where it was before. But when I alt-tab from renoise (if it is in full screen mode) cursor is focused on upper menu

Does it matter whether or not you have the diskop open in renoise when you bring it to the forefront? Does having it closed negate the sluggishness?

Yeah i meant the diskbrowser. Not sure it still does this, but in the past I think it rescanned stuff when having Renoise brought to the foreground, resulted in a delay. Especially on nested folders with a lot of files.

It doesn’t save hotkeys

Interesting. I am using Renoise 3.2.1 on Win 10 Pro and have many custom hotkeys. I’ve had no trouble saving/loading them.

Nor do I have any trouble with alt-tab. How long do you keep it in the background before alt-tabbing back?

How much memory do you have? Wondering if Windows is unloading from RAM when a program has been idle for a while.

Interesting. I am using Renoise 3.2.1 on Win 10 Pro and have many custom hotkeys. I’ve had no trouble saving/loading them.

there are posts reporting same problem. Some state that problem occurs when os has language other than english

I run as admin, set en lang as default, different input to each app.
Now, I loaded previously saved keybindings, ctrl-z surprisingly works ok as undo, regardless of chosen layout, but ctrl-x doesn’t, although it’s there 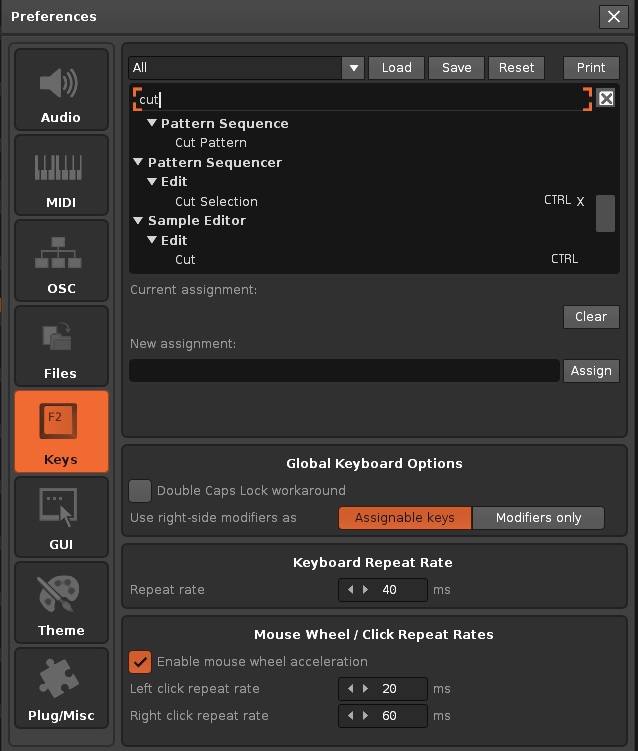 How long do you keep it in the background before alt-tabbing back?

Sometimes for hours. It seems that when folder “my tools” is not empty, hanging appears sooner.

How much memory do you have?

32Gb. Well, maybe there is something wrong with my ram. I usually have 3 open internet browsers. One of them has 100+ open tabs. Sometimes they hang too.
By the way here is logLog.txt (2.6 MB)

According to the log, your audio device sometimes “hangs” - hard to say why this happens. Some device have problems resuming from sleep mode. Others may conflict with other running applications. Which device is this? If possible try selecting a different one or try using ASIO drivers or ASIO4All.

If this happens again it also should be possible to fix this by reinitializing the device in Renoise’s Audio preferences.