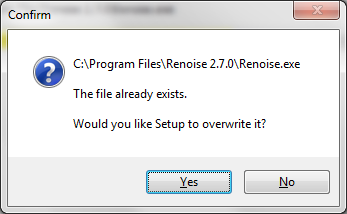 is this really needed?

is this really needed?

That is i think the default behavior of the installer software itself (I doubt Taktik wrote that software).

anyway, you should have uninstalled beta version before installing RC1, as stated in the presentation forum thread

anyway, you should have uninstalled beta version before installing RC1, as stated in the presentation forum thread

okay, i see the reason is to avoid mixed up content. i didn’t uninstall the beta before, is there anything bad going to happen now with my Renoise?

If you don’t uninstall the Beta, it does not mean it has an immediate effect on how the software acts, but it could be that some fundamental images or files in the program folder may have changed in the new version and perhaps access rights prevent the installer from overwriting these files or other things like the ReWire needs to be registered properly that may not happen properly.

We have had reports spanned across the past from several different users experiencing difficulties with Renoise and having them fixed by uninstalling and reinstalling Renoise.
So the advise is a “just in case” message because problem experiences might be very likely if you have installed across the beta.

i see, so i’d be better uninstalling the rc1 and installing the final 2.7.0 as soon as it’s released? or doesn’t it matter anymore if the stable overwrites my rc1?

generally, if you don’t experience issues during installation and immediate use of the new Renoise version, there is no reason for uninstalling the previous version before, except if the team expressively suggest it to do, as it is in the 2.7Beta=>RC1 case

uninstalling first makes sense. clean slate and all that.
but still, i’ve never not wanted to overwrite the exe.