This is not a very new idea though…

I thought of this idea when I considered about the Duplex layout for APC40.
Please see this:
2734 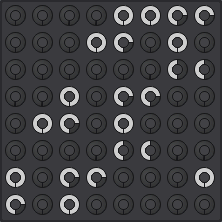 If I selected a FX which has many params (this is Multitap Delay) on the APC40, it’s very hard to use these knobs.
I cannot see where the target parameter is. So I would like to collect only required parameters. 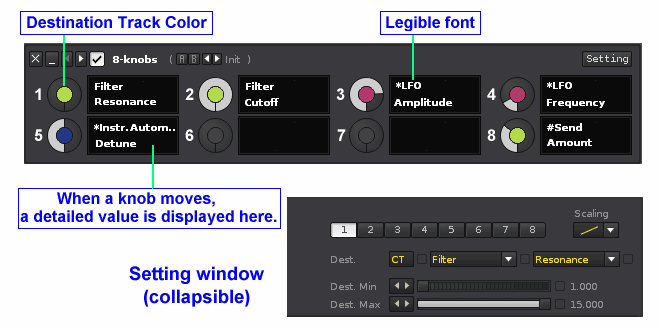 8-knobs device resembles Hydra device functionally, but it has only [1out] X 8.
Simply you can set your favourite parameters up to 8 on this device.
Then, if you do midi mapping to these 8 knobs, don’t you think that it is convenient somehow?
You can set not only “fixed mapping” but also “dynamic mapping (Selected FX)” by Renoise’s native midi-mapper, so you can use multiple 8-knobs devices too.
There are many midi controllers which have 8 knobs, so maybe it’s useful if such 8-knobs device is exist.

Is this worth or not??

So you’re talking about a variant on the much discussed Doofer Device?

We’ve been thinking out loud a lot on IRC about modularity and DSP chains recently. I for one believe Renoise’s future lies in more modularity and the emergent behavior that results in, and as such will always shout about new metadevices or modulators or routing capability. The #1 argument against this is that the DSP chains become very cramped from a UX point of view. An example is the chorus device, which has its own native LFO. My instinct at this point, with a separate LFO device and very w…

So you’re talking about a variant on the much discussed Doofer Device?

Ohhh, indeed it’s somewhat similar.
Since the starting point of the idea was different, I did not notice it.

But I feel it’s somewhat different still…
8-knobs device is not a “rack” device. It’s just only a “link” device like Hydra.

But…
if Doofer Device can include 8 Hydra device into 1 rack, indeed it’s the same thing…oh well.

Both of them are taking the parameters you want from multiple devices and presenting them in one interface, correct? As I understand it that’s the main idea and in my opinion a brilliant I do really want to see implemented! The use of knobs in yours seems a little strange, as nothing else in the DSP Chain uses knobs for native display. But I do like the idea of giving it scaling and curve options, al la the Hydra, that is a really nice advancement on the initial idea!

Or am I mistaken and you’re not talking about a normal Meta Device which will be present in Renoise’s DSP Chains?

Both of them are taking the parameters you want from multiple devices and presenting them in one interface, correct?

About knobs: I like appearances of the knobs than sliders, for showing what kind of purpose this device exists for clearly (There are many controller which have 8 knobs). Although I will follow when devs say it must surely be sliders.

I agree that the knobs are sexy, only mentioned sliders for sake of consistency with the rest of the GUI

On the whole 5* idea though and hope something similar will make its way into the program soon.