Allow sending a send to itself

If possible, I would love to send audio signal to itself. So put a send on send and let that send sent to itself to create a feedback loop. I know this can blast some ears for those who are not aware of the effect, but Dub (Techno) is highly keen on this technique. Something I would love to be able to recreate.

So basically; allow to disable the error “Sending a send to itself is not allowed”. Maybe make an “Are you sure you want to send a send to itself? y/n”. Thanks a zillion! 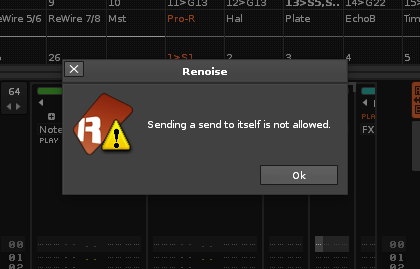 I can imagine that you will not get the desired effect, but just a blast of noise as it’s not analog hardware.

Works perfectly fine in other DAW’s such as Ableton for example. The output of a send will be routed back into its input to again calculate the output. Don’t see what that should be a blast of noise. Likely when you keep the signal routed back in static, but I would like to automate the amount of input of creating the feedback loop. This can make interesting expressions. Soundtoys actually developed the “Recycle” button in their Effect Rack plugin. This is basically the feedback loop, but it would be nice to do this with other fx. Native renoise effects for example.

Ok… what happens with two sends?

Unfortunately, you can’t route to a prior send as well in Renoise. The way you describe the situation you’ll create a “bigger” feedback loop. As in, there’ll be more effects involved if send 2 has a fx inserted. It’ll change the feedback loop quite a bit as there are more fx/calculations involved. Imagine a feedback loop with multiple fx’s. So let’s say send 1 delay > send 2 reverb > send 3 chorus > send 1 delay, and automate the parameters with lfo’s or envelopes. You’ll manage to make your own drone machine with the help of fx and feedback.

Certain feedback loops can indeed result in dangerous noise. For example if in the loop is only a gain element that is boosting, the boosting will repeat infinitely thus creating a big explosion of noise. In analog world the effect would be mitigated by the circuits’ clipping elements, in digital it will be the hard comb filter explosion of death to your speakers. That is maybe why renoise has feedback prevention inside its mixer.

Than the following question is, why is this possible in DAW’s like Ableton for example? They seem to be able to sending a send to itself with interesting results when using effects. It’s disabled at first to keep your ears save, but for those who know what they’re doing it’s possible to enable these knobs. It makes not really sense to me why Renoise can’t allow this in terms of audio routing. Obviously the results may differ in the software/hardware realm, but that doesn’t needs to be the answer to why it’s not possible, right?

Has this already been looked into by the developers? Would love an option in the preferences f.e. to enable this function

I still don’t get how that would work. If you have a track with a send that sends to the same track, wouldn’t it be an infinite loop? like, doing infinite calculations for just one tick of music?

It works amazingly. Mostly with dub music it’s a “must”. You can get crazy hones, drones and sirens with feedback looping effects to itself. Here’s a video that shows the effect: https://youtu.be/pLtAfrE0Yfo?t=97

Yes ableton and reaper are the only daws that allow feedback loops in the mixer , but stating that this is essential for dub techno is just ridiculous .( yagya’s first dub .tech records were made in tracktion )
You just need a great delay like echoboy or vallhalla delay (highly recommended ) + minor seventh chord

Well it seems the quotation marks didn’t do their job. Didn’t state it’s essential, but it works damn fine in this kind of music. Obviously you can use the technique for whatever floats your boat. The point is, I would love to use it in Renoise instead of something like Ableton. To play your game; enough dub music made with a minor triad.

Give me one example why you would need it , apart for delay effects .

I don’t know how to make this in Renoise.
But can confirm, that this technique is widely used in reggae dub and it is possible with Ableton.
The thing is that you can customize your delay very much with this technique. 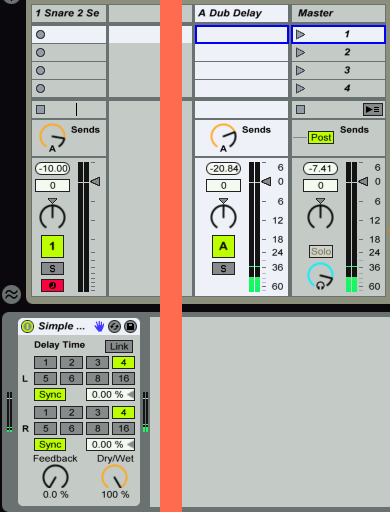 A tutorial for Ableton Live explaining how to utilise audio feedback creatively. In this part we create a "dub delay" effect using only basic Live devices

In Renoise I use PSP Echo VST, which has really nice analog sound.
You can here psp echo in almost all my tracks (for example https://soundcloud.com/cantti/north-dub)

But what are they doing exactly? Unless I am missing something, it can’t be infinite feedback, because that would be infinite calculations for just one sample of sound, so is it a fixed number of loops or something? I never made a DAW, but the way I see it, “the CPU does stuff” until the sound ends up in some kind of output. Yet if the send tracks sends to itself, then that’s an infinite loop, and the sound never reaches an output. That’s my conundrum, they can’t be literally doing that. Or I’m just thinking about this the wrong way.

When I searched a bit, I found infinite tutorials on how to use it, nothing about what is going on on a technical level

If we can suss out what is actually going on, rather than just what it literally says on the tin (“send it back to the beginning”, implying an infinity of calculations which can’t possibly be), we’d be much closer to either this becoming a feature, or knowing why Renoise can’t do it.

I guess the calculations will stop once there is nothing to calculate , iow reducing the gain/treshold in the feedback loop ( by adjustting the track’s slider)
Audiomulch also has feedback loops , but that program is built from the ground up to deal with modularity

There is no difference in using the feedback loop between two tracks with a delay inserted ( feedback level of delay to zero because the track’s gain slider now define the amount of feedback ) and a delay with dialed in feedback .on a single track

The only advantage you may have is inserting different kind of effects in the feedback chain . like frequency shifters or pitch shifters +reverb for shimmer effects , but then we are just experimentinig with signal routings and effects and imho that is not the focus of a daw .
I use reaktor and audiomulch for that kind of stuff

Yeah, that’s the thing. Why should I buy/dive into something like Reaktor or Audiomulch if simply send to send would be possible to get the desired results? I don’t mind if it’s blocked for users who don’t want to use it or simply don’t have an idea of audio feedback. It can hurt your ears when you’re not careful, but the playfulness results to another dimension of effect using (in my experience). Don’t see why it “shouldn’t be done”. please, notice the “…”.

I believe it is not just “allowing feedback”, since this seems to introduce a ton of new problems to solve. Pretty sure that digital systems allowing this take care of those edge cases. For example it would require a clipper in any case.

Instead I would love to see ringmod between samples, so another lane named “ringmod” in the modulation tab. And also a “sync” tab, so for single cycle waveforms, you could actually trigger sample restart of another single cycle sample. Or maybe more simple, a target selectbox in the sample properties, “ringmod with sample X”, “sync with sample X” (surely this isn’t that easy to implement either

TLDR I think the sampler should first get some basic additions before addressing such special stuff. And it does not look like the Renoise team is willing to implement anything else than basic sampler capabilities.