Any Games That Give You Good Vibes?

Just noticed that there are loads of games that have an atmoshpere that really sucks you in , but they’re all dark and filled with angst of some sort… Not that it’s bad but I’m just not much into having that right now.

I think I already know the answer to this but does anyone know any good game that actually gives you good vibes?

Can’t think of any myself…

The games by Nifflas are very simple and a lot of fun. Especially “Within a deep forest”.

Hmm. Since almost 10 years I only play the “Descent”-Series. Recently those games were joined by “Prey” but that’s all. No other games except of course the old Lucasarts-Games

Oh, edit: I forgot stuff like Gianna Sisters and Turrican. The C64 Version of Giana and the Amiga-Version of Turrican 2

Now I am done.

or any marble madness clone

and a lot of people like katamari damacy, although i’ve only tried the psp version which had some very sheisty controls.

It’s a bit weird here. Nowadays, there are more or less only games which I play because of their soundtracks.
To name a few: Rappelz - overall atmosphere is surely also amazing (taking in count, that this one is a freebie), but the music in it, although mostly repetive, keeps me hooked. Turrican II - as I always said, Chris Huelsbeck is god and the gameplay, although thousand times played, is still fun. Tehn a pretty old one called Novastorm. A simple shoot’em up but the soundtrack is just amazing and kept me playing this one for years, just that I can listen to the music. And every work by Nifflas is also surely worth the recommendation.

Not music-wise: It’s Return to Castle Wolfenstein and the multiplayer successor Enemy Territory (which I’ve been playing like nuts in the last years) for me. Best balanced games when it comes to gameplay, storyboard, atmosphere, while not sacreficing everything for just graphics.

Actually, these days its hard to find a game that i bothered to finish. I tend to get bored half way through.
Its strange but true. Games are developing and getting better and more visually beautiful with each generation of new technology, but i am not getting those vibes anymore that i got back in old days. I remember palying “Cannon Fodder” or “Chaos Engine” on Amiga (they fit to 1 or 2 diskettes lol) and it was so interesting and addictive back then. Much more than nowadays.

So, now i like to play games that dont take much time and commitment. For example multiplayer shooters. eg when im bored i just load up a “Warrock”, shoot the crap for an hour or so and get back

And also i play Richard Burns Rally from time to time.

!!! Descent is my favourite game of all time. you ever play on Kali? maybe we could play sometime

speaking of which… we should play again sometime

adventures of lomax on playstation 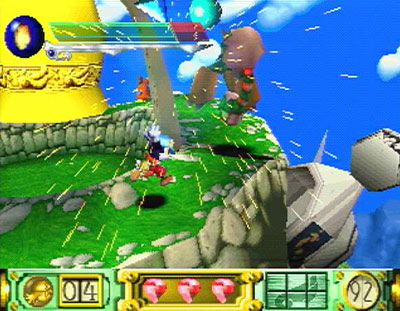 and many others including donkey kong country series, castlevania games on gba. good stuff

Hm…this is a thread about good vibes. Do I smell a bit of nostalgia in the air

My favourite games in the nostalgic department:
Another World
Descent
LucasGames’ point and click adventures (the whole lot)
Turrican
Prince of Persia
Carrier Command
M.A.M.E (too many games to mention, but Bubble Bobble is a favourite)
Thief: the dark project (well, more like paranoia than good vibes…)

the metal slug series for the neo geo just makes me smile or laugh hard when I play it. Though I played it so often in the past deade the joke is kinda over.

Monkey Island! I get the chills all over me only hearing the music…

More recently I enjoy playing on the Nintendo Wii with friends.

the metal slug series for the neo geo just makes me smile or laugh hard when I play it. Though I played it so often in the past deade the joke is kinda over.

I just love all those tiny animations going on in the for- and background.

!!! Descent is my favourite game of all time. you ever play on Kali? maybe we could play sometime
speaking of which… we should play again sometime

Usually I find my losing opponents (*g) on http://d3.descent.cx/tracker.d3

hehe. but I must admit I did not play since 6 months…

hehe. but I must admit I did not play since 6 months…

i’m getting a bit of deja vu here, i think we had this conversation before a couple years ago and we determined that you only play d3 and i only play d1 … but i’ve recently discovered d2x rebirth which also plays d1 levels so i’m enjoying that

I remember now, too. Anyways - The d2x-rebirth-thing is far from being stable but quite enjoyable.

I remember now, too. Anyways - The d2x-rebirth-thing is far from being stable but quite enjoyable.

so does that mean you’d be up for trying it sometime?

so does that mean you’d be up for trying it sometime?

Still searching my Descent 1 and Descent 2

I still have quite a bit of fun playing RTCW multiplayer. mp_beach, with 8-12 people -> perfect. Usually most people still playing it aren’t taking themselves too seriously, which makes for a fun atmosphere. I guess I’m childish, but the voice chats still crack me up after all these years.