Can I overclock my buffer size or delay play to minimise CPU distortion?

This has to be a beginner’s question but I can’t believe I can’t solve this.

In a nutshell, I want to minmise crackling. I am running ASIO 1024 buffer size with a focusrite interface. Pretty standard. I hate the crackly noises!!!

The renoise settings I have messed around with, but it seemed like rendering every time i want to press the spacebar is insane. Anyone? this has to be potentially the most common problem right?

oh, if i need to buy hardware, please tell me. I have 16cores but only one RAM card, my hard drive is an SSD plugged directly into the motherboard to reduce delay. I thought I was making something that would overcome clipping like a graphics card overcomes FPS. Help?

I am running ASIO 1024 buffer size with a focusrite interface.

Wat OS & soundcard type? I have a focusrite scarlett here with driver 2.5.1 API 3.0 installed, (you can check your version in the mixcontrol software which opens automatically when you press ‘control panel’ in the audio tab of the Renoise preferences), and it is working fine here. 240 samples (5.0 msec) latency, I probably can lower it but never bothered as this works fine.

Perhaps you are using a ton of heavyweight plugins that take too much cpu to run?

Hard to say what might be wrong without seeing your hardware. Can you post a screenshot from Speccy? 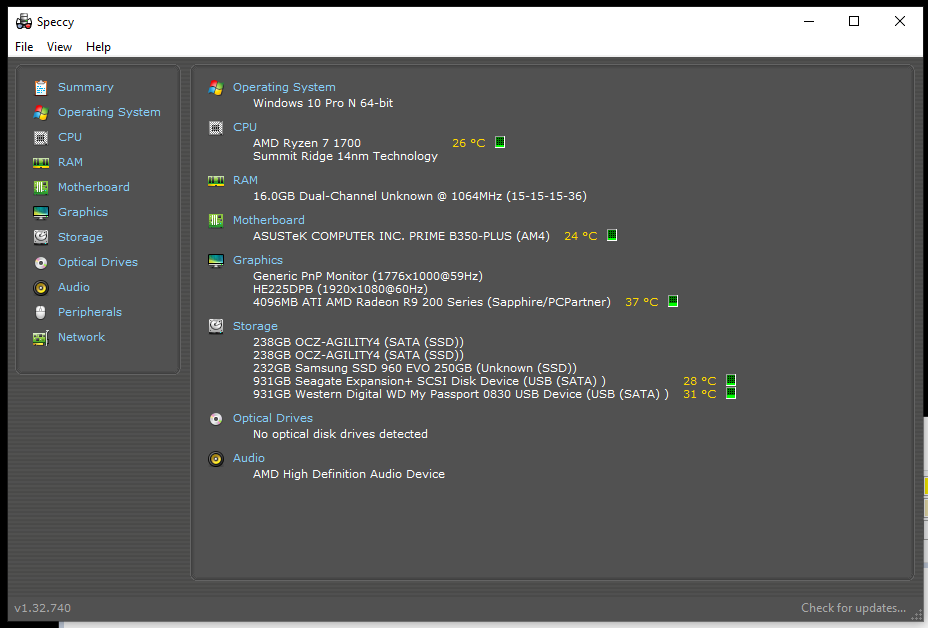 Take a look. I don’t claim the computer is anything too special. Thanks for the video, but I’l be honest, it doesnt really answer my question. Cool though

Yeah, it was there by default strangely, when i changed it… Wow. Wont do that again

Perhaps you are using a ton of heavyweight plugins that take too much cpu to run?

@Dalvidos: So just for a bit more completeness for folks, as Jonas says how demanding is the Renoise project for your machine? What is the CPU utilization when the song is playing with this 1024 ‘crackling’ buffer? (Did you try increasing the buffer size (yes thus increasing the round latency…but for science) does that reduce/change the crackling?)
(btw I’ve never heard of ‘overclocking my buffer size or delay play’.)

I should say, yes at standard buffer sizes, my plugin arrangement makes it unlistenable, but my thinking is that somewhere there must be a method to deal with the plugins. So yes this has everthing to do with lots of plugins running, but as yet I dont see an efficient freeze method in renoise. Plugin to instrument i find has varied results, and is redundant when all of my projects rely on plugin automation the whole way through…

I hope i havent defeated my own case…

and btw, i never expected anyone to have heard of it, it just seems like a problem that is so ubiquitous… everyone i know just says “check your buffer size”. LOL. I figured that if I was asking more of my computer, I must be able to do something…

@4tey Well this is the thing . I find that when the crackling is happening… CPU isnt maxed… its never anywhere over 12%.

My assumption (and i don’t mind being wrong) is that the plugins and renoise are not adequately utilizing my CPU. I must say renoise actually seems to make plugins work more efficiently. I know its counter to logic, but when I run maschine standalone for example, the same project and my performance is awful, alongside renoise as a VST…, maschine works great, but this issue isn;t just when maschine is open. I had to stop working on a project because renoise couldnt handle two instances of Massive… it’s a little bizarre.

I have theories… but no solutions.

Oh, for the obvious queiry around why i use Pro N - I installed all the media things it lacks by default. Personal choice to minimize shizzles. You know how it is

but as yet I dont see an efficient freeze method in renoise.

There is a tool which works here;
https://www.renoise.com/tools/freeze-track

Its a good shout. I actually rechecked, and humorously different programs give different readings. Sadly enough my CPU gets to 73% at times… Thanks

@Jonas Thanks for the freeze

@stoiximan I never even knew that existed. Sheesh. All these years. I’ll see how it fairs. Cannot hurt eh?

Additionally, if the obvious is that it’s hardware… Tell me. lol I’ll save for something other than the million and one plugins i fantasize about. Ha

I wouldn’t have thought your Ryzen 1700, an 8 core processor would be the problem, but I just looked up an comparison of it versus my 6 core Intel and your AMD is actually much slower. Even though I can run heavy projects I wouldn’t want to have less power than the 9600k as it run into crackles too when things go crazy.

You know… its the oldest part of my computer, I really should have guessed. ahh shizzles. I’ll have to consider the best CPU this motherboard can handle. This does not come naturally to me, I’ll be honest. I put the thing together, but my friends were a ton of help. HA! thank you. That kind of solves it doesn’t it? (don’t close the topic though)
@Garf - I know this is a bit cheeky, but what’s my best option here? I’ve checked out a better CPU, the AMD Ryzen 7 2700X…

It looks like the best one compatible with my motherboard. Will it do the trick?

Well I don’t want to be the one drawing conclusions… and I have to say I don’t know how AMD behaves with Renoise, you have an 8 core CPU which sounds like a dream, my 6 cores runs great so it’s kinda hard to believe yours run poorly. You might wanna do more investigation before getting another CPU.

Anyway the Ryzen 2700x is only 20% better than you current if that comparison website is to be believed, in my opinion you probably need better if this is indeed a CPU problem.
Type in your motherboard model number to check for CPU support:
https://www.asus.com/support/cpu_support

Would be interesting if you can make a Renoise file that is just about to distort on your setup, and then let me try run it.

and I have to say I don’t know how AMD behaves with Renoise, you have an 8 core CPU which sounds like a dream, my 6 cores runs great so it’s kinda hard to believe yours run poorly.

According to that userbenchmark link the Intel processor is base clocked 700MHz faster. So single threaded ‘performance’ would probably be better from the Intel chip. Yes seems like a dream with ‘more cores is better’ but other factors are involved that denote the overall ‘performance’ per clock.

HA! thank you. That kind of solves it doesn’t it?

Without getting into this (just thinking out loud tbh)…Let’s say a new ‘faster’ computer/CPU solves the audio crackles with say 50 plugins all blaring away in Renoise. What happens if you have a project with 55+ plugins and the crackles reappear?

a few thoughts from my side towards this matter - first one especially for intel users:

Just as a side note regarding “High performance”, when set CS:GO runs so much better and consistent, I still do play the game from time to time and it really is like night and day which is shocking you have to actually do this to get proper performance from a game. The game and apparently Renoise too should be able to force this setting on.

@4tey My friend insisted on an intel CPU… I am aware more cores arent better, but it’s difficult to know what is optimal for renoise.

What happens if you have a project with 55+ plugins and the crackles reappear?

My situation is so tragic, I keep on nearly finishing projects… it gets to a point and I just lose all love for my music when at some stage it crackles and is unlistenable. My projects aren’t unreal. I’d be happy with a computer that just allows me to finish my tracks. I know there is going to be a threshold (there always is right?) but I just want my projects to sit comfortably beneath it.

if you want to try this for yourself, edit the high performance profile to force your CPU at 100% of its nominal boost frequency for 100% of the time

I’ll be honest this sentence threw me, I have performance settings at max anyway though, so I’m fairly sure I already do this. You are a fountain of knowledge, it’s goof to know, yeah asa far as my RAM and SSDs go, I was just making futureproofing decisions… The irony is not lost on me, but I’m not the most wealthy tbh.

The software that reported your system specs claims that your RAM is running @1064MHz (which most probably translates to 2.133 MHz DDR). If that readout is correct, you mighta wanna check your UEFI and enable the XMP profile for your RAM. 1st gen Ryzen is rated for 2.666MHz RAM, and your Dual Channel Kit might be able to pull that off.

I’ll do that now… I have to fugure out what that actually means.
Your last recommendation. EEK! ha. Updating my motherboard this way I’ve never actually done before, its a lot harder than just updating drivers isnt it? sheesh. I downloaded a .zip and there’s an unopenable .cap file… I’ll be doing this with a USB as that seems to be the only way according to a page on Tomshardware, or am I misunderstanding this?

The Ryzen 3600? I’ll buy it next week if its the real deal tbh. I just can’t stand this anymore.

What does this mean?

As a side note guys… I installed the IRC client tool, could never get it open.

Would be interesting if you can make a Renoise file that is just about to distort on your setup, and then let me try run it.

I’m not against this, but in reality, the scenario is pretty simple to recreate - If you want to chat on the IRC client, perhaps we can actually do this provided we own similar software. I have a spare license for Massive if it matters? its been gathering dust in my emails for… well a long time. (I got a free license when i bought a bundle and i already owned it ;/

Thank you everyone. I know this isnt solved yet, but I’ll do everything as you advise. If the Ryzen 3600 ifs the solution… tbh its cheaper than the one i was looking at and I would be happy to just have this problem solved.