Things aren’t going too well in Wuhan. This video is apparently from an independent guy inside wuhan showing how the situation really is.
Not for children.

Yeah things have got pretty out of hand with this one.

This channel has a lot of similar short vids separately (same warning Not for children): 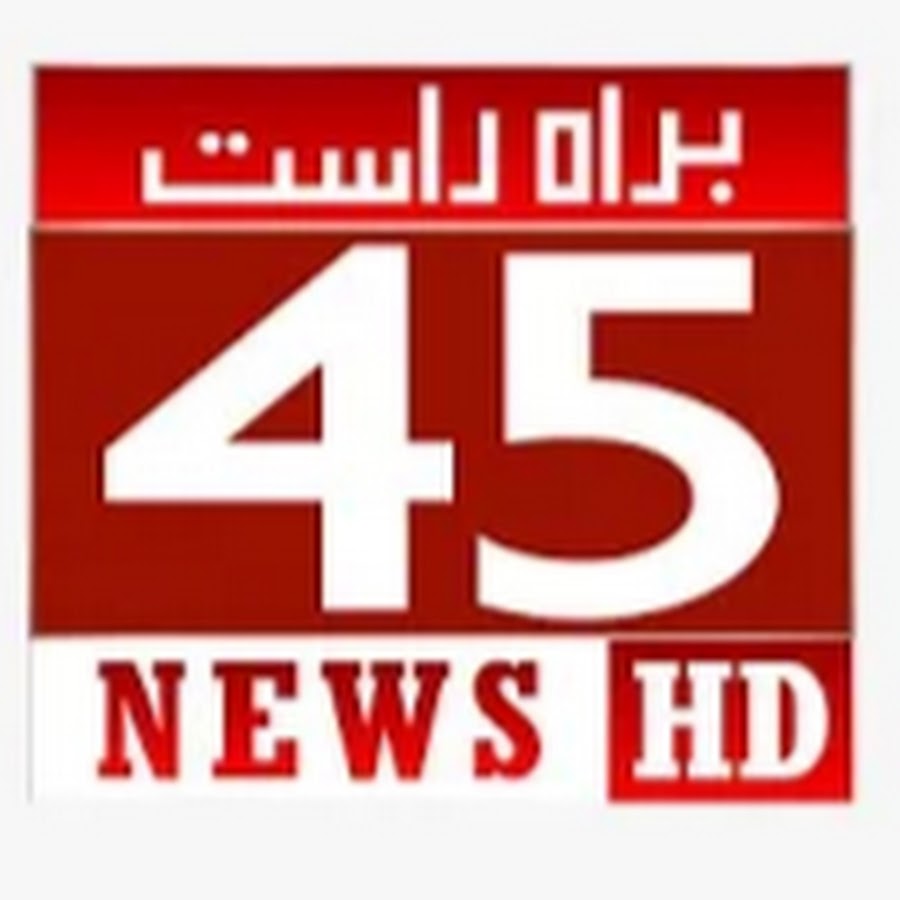 News45 provide news of everywhere. Do subscribe our channel for latest news.

No matter how mild or serious this outbreak becomes, there is bound to be more disruption, so its probably worth stocking your cupboards up with some extra shopping (stuff you’ll use anyway over time, tins etc.). Also make sure any medications you/ family need are in order. Bottled/extra water is always good to have about the place for any risk of services becoming disrupted (true at any time not just Corona). 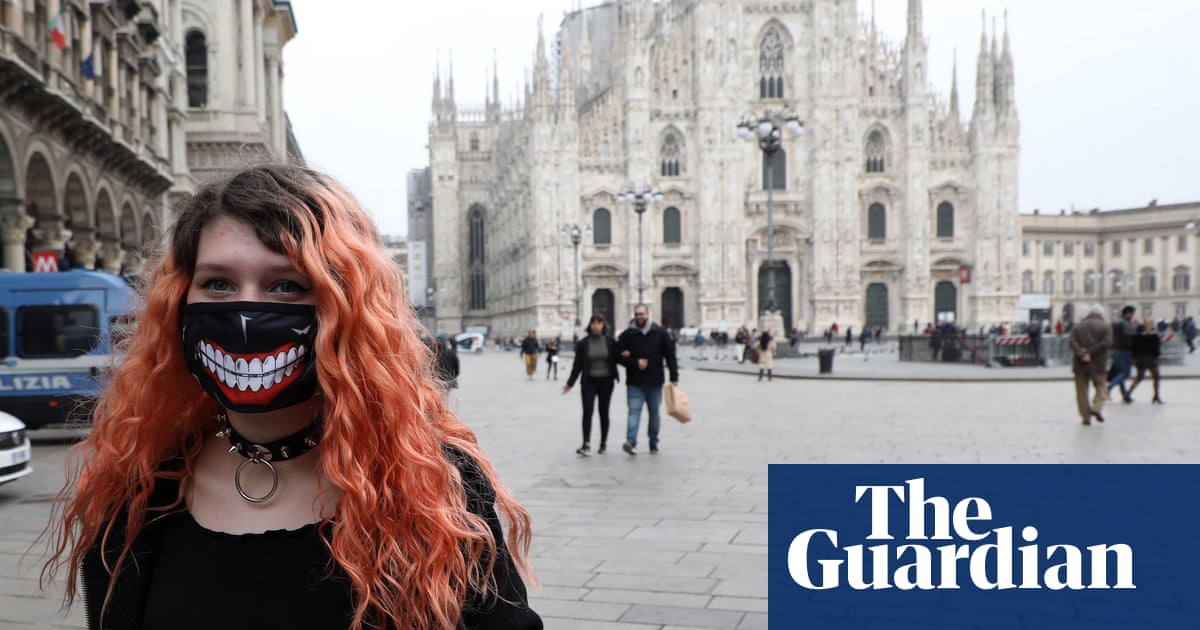 'It's extremely empty': coronavirus brings Milan to a standstill

I can talk about what is happening in Spain.

In my country (Spain) we already have 10 confirmed infected, 9 of them were travelers returning from Italy. This has happened in less than 4 days. 10 infected confirmed implies that there may be 30, 50 or 100 more, which we do not know. This goes like this.

In Italy now there are 400 infected confirmed. I suspect that there will be many more in Italy, which are not yet known. It is strange that there are so many infected travelers from Italy. This means that the virus is very easy to transmit.

But you don’t have to go crazy. The virus is not very potent, it is like the common flu. Very few people die. You just have to worry about the weakest (older people, people with low body defenses, people already sick of something else). This is where the concern is.

So you have to be calm, make “normal life” and above all be well informed and contrast the information. There are many lies circulating on the Internet. The virus will reach many places, it is inevitable. But it is not a serious virus.

The only thing to try is to avoid the maximum number of infected. Hopefully, it will be a seasonal virus, like other coronaviruses, and in summer it disappears (high temperatures). For next year, there will probably be a vaccine. There are also certain drugs that help fight it, some used for the flu.

About China, many things have happened. But certainly, what they have achieved there, we would hardly see in another country. Quarantining more than 50 million concentrated Chinese is very difficult. They’ve got enough muscle, and we should be encouraging them. My entire country (Spain) has fewer people. Here it would be impossible to do.

Leaving the dead aside (a rate between 2 and 4% of those infected), the saddest thing is that all this will affect the economy worldwide, it will affect more certain countries.

Hopefully, it will be a seasonal virus, like other coronaviruses, and in summer it disappears (high temperatures)

We may get some idea of how the virus behaves in hotter conditions earlier. There is now a reported case in Brazil, again from a tourist returned from Italy. 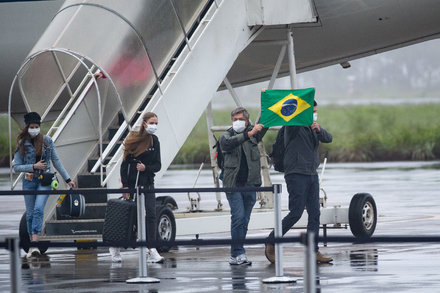 Health officials were scrambling to track the man’s movements after his infection was confirmed.

Hopefully they will contain it, but if it takes hold now in the southern hemisphere that could bode badly for summer months up north aswell. Australia also has 23 known cases according to worldometers. I’m not sure of the quarantine situation there. But like you say there are probably many more unknown cases with many of these numbers.

Even then, Flu has different infection cycles in tropical areas vs temperate. Seems very difficult to reach/infer any conclusions until this plays out. 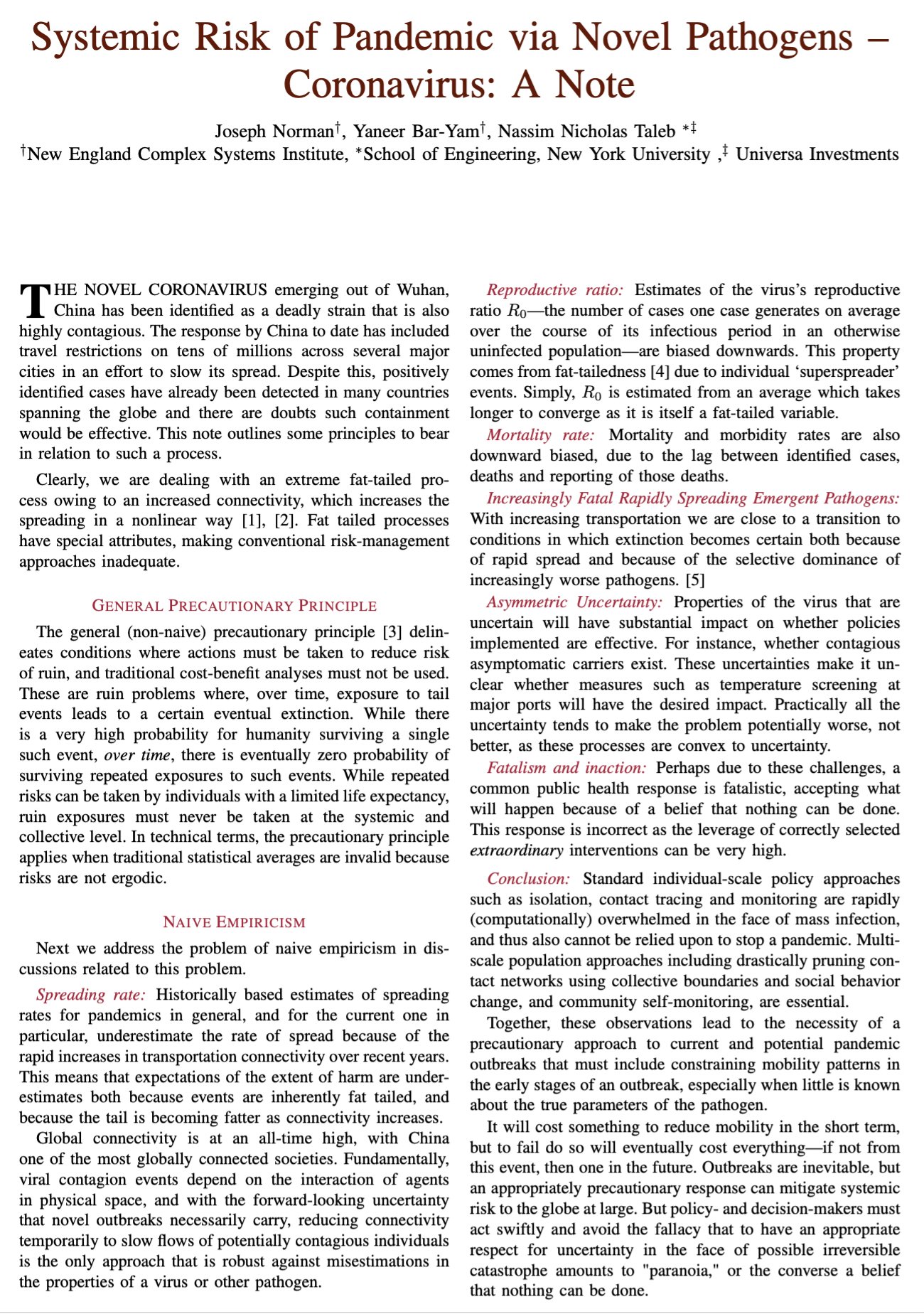 Here in Brazil, this time of year is always very hot, especially in São Paulo, where the first case was reported. However, it has been raining for several days and the temperature is low around 23 degrees. Many people show signs of typical colds from other times of the year, and this is very worrying, it will certainly contribute to the increase in cases of Covid19. I have lived in São Paulo for 40 years and never saw the weather at that time of the year become so unstable, certainly there are plenty of reasons because here, everyone should know we have a stupid president, who does not respect the environment, nature and animals. The health system is very precarious, so many people can die …

The health system is very precarious

This is the worry, even if most cases do turn out to be mild, there are going to be strains on the health systems. I really do feel for the health workers at the moment. Long hours, plus constant exposure to infection… 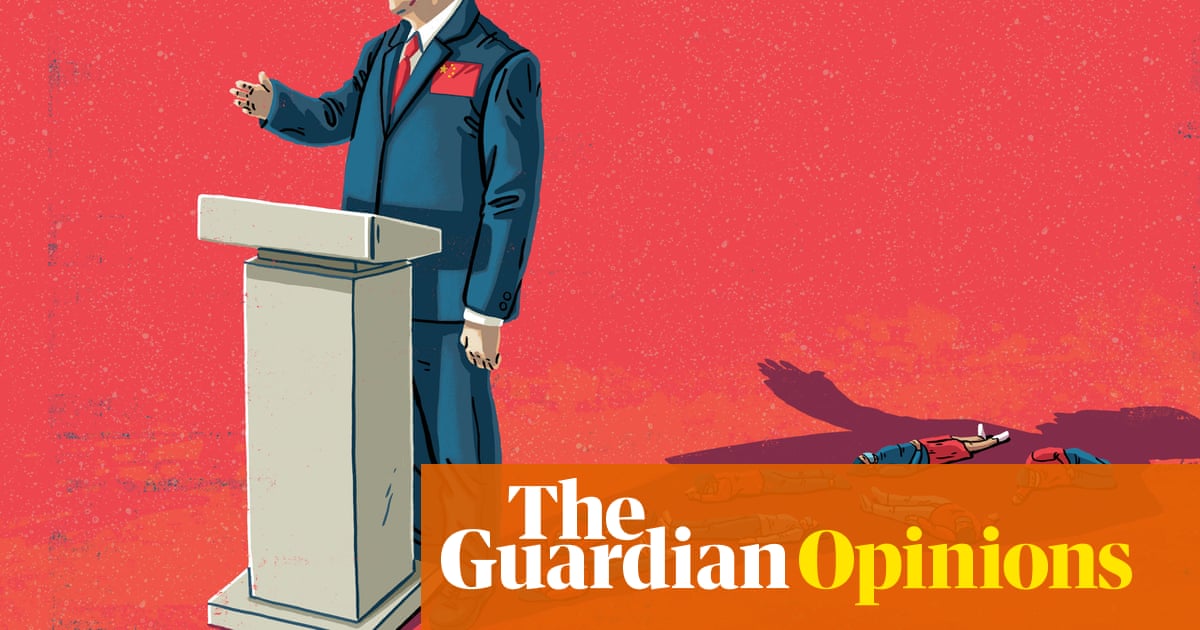 Xi Jinping has buried the truth about coronavirus | Ma Jian

The reaction to the outbreak has revealed the unreconstructed despotism of the Chinese state, says Chinese author and dissident Ma Jian

Anyone up for some bat soup? 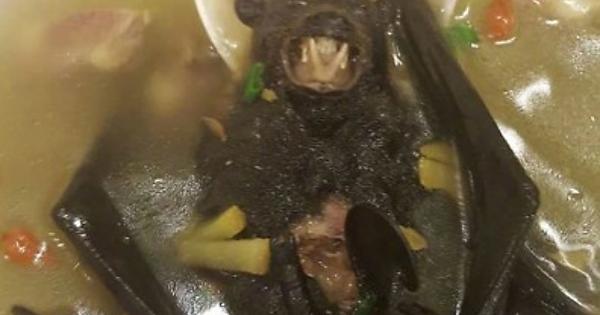 When looking at the genome sequence of the new coronavirus, Professor Ruan Jishou and his team at Nankai University in Tianjin found a section of mutated genes that did not exist in Sars, but were similar to those found in HIV and Ebola.

Compared to the Sars’ way of entry, this binding method is “100 to 1,000 times” as efficient, according to the study.

The mutation could not be found in Sars, Mers or Bat-CoVRaTG13, a bat coronavirus that was considered the original source of the new coronavirus with 96 per cent similarity in genes… 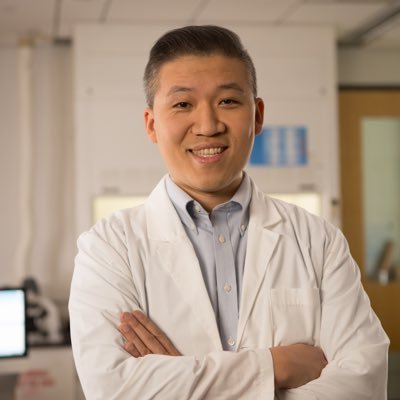 The Centers for Disease Control and Prevention is telling Americans that they should be prepared for the possibility of a COVID-19 outbreak in their community.

But what does preparedness look like in practice? The short answer: Don’t panic — but do prepare.

They compared the genetic sequence of the new coronavirus — 2019-nCoV — to a library of known viruses and found a 96% match with a coronavirus found in horseshoe bats in southwest China. The findings were published in a study in Nature this week.

“They’re too close in terms of their pure genetics to say they’re not related, or that they didn’t have a common ancestor,” says Vineet Menachery, a virologist at the University of Texas Medical Branch at Galveston who was not affiliated with the study.

Menachery and many other researchers think this new coronavirus spread from bats to humans, with a possible stop with another animal in between. 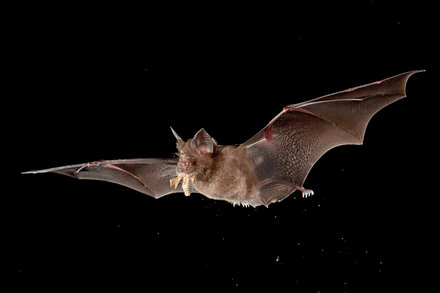 How Do Bats Live With So Many Viruses?

They are considered the probable source of the coronavirus outbreak spreading from China. It turns out that they may have an immune system that lets them coexist with many disease-causing viruses.

If this virus came from bats or not i don’t know, but imo i think people should stop capturing and eating animals that are notoriously known to carry lots of deadly viruses.

If this virus came from bats or not i don’t know, but imo i think people should stop capturing and eating animals that are notoriously known to carry lots of deadly viruses.

Already 130 deaths in Germany since new year, caused by Influenza. None by Corona so far.

We have no in Berlin fist 3 Infections. The GOV seems pretty cluless also like unprepared for this. SCARY

“Confirmed” means that they are official and controlled. But in reality there will be many more.

If in 5 days 110 cases have increased, in a few weeks we will have thousands. In Spain there are many current events, the Fallas in Valencia, the Magdalena in Castellón, soon Easter. They are parties where a lot of people accumulate. There will be thousands of infected in a very short time if the EU does not become rigid. This is a problem of all countries. Let’s see if the EU really shows that it serves as something like “Union”.

Remember that the virus is not dangerous (its death rate is around 2%).

The problem is the possible saturation of the hospital centers, the lack of means to attend them all. The conjunction of this virus with other existing, risk groups: the elderly, people with low defense diseases in the body. The serious problem will also be in countries with few medical resources. Careful with this!

If we want to stop the advance around the world, it is time to think about paralyzing the whole world for a few weeks. This is not a joke. Economically, everyone will recover easily without going into recession if done right.

The other option is to let the virus infect indiscriminately. Nor would it be a big problem, but it would be another virus for the collection. There are already some experimental treatments to combat it, but there is still no prevention vaccine.

In a few months it is possible that we do not even remember this virus, but currently, the main problem is the attitude of the people, due to ignorance of the problem.

What is happening around the world is that the virus is ahead. All countries go “in tow.”

We have to think about the future. If in a few months another virus reappears, which will, there will come a time when the world is saturated with different viruses at the same time. This is not a joke. You have to think in perspective. It is not about alarming, but about preventing more serious problems.

The months of March, April and May will be critical.

Prevention is the best weapon against this.

The trouble is not that the percent doesn’t look high, but how infectious the virus seems to be. Theoretical worst case scenario that everyone in Spain were to catch it, that is 2% of around 47 million people ~940k fatalities.

I am by no way saying that we will see anything like that, but the point being that a highly infectious ‘low’ mortality disease can be devastating aswell.

Uncertain early numbers from China really do not help to see what we are facing here. Even so, the Chinese response will not be replicated around the world, and will not be possible from a medical standpoint in many developing nations, so later numbers could be worse.

No doubt this will effect various countries very differently over time.

With the amount of unknowns I completely agree with your sentiments of caution and worries about the medical systems.

Hopefully we will see something relatively manageable emerging out of this!

If you want to stay updated on those numbers :

Why care for something which is out of your control? Just will make you crazy in the head. Just wash your hands more regularly.

Btw. doctors usually wear a mask not to protect themselves, but instead not harming the sick people with their bacterias and viruses additionally, e.g. while an operation and opened bodies.

Why care for something which is out of your control? Just will make you crazy in the head. Just wash your hands more regularly.

Yes, the disease is out of our control, as is the governments response. The thing we can do if we want, is make ourselves a bit more resilient to local disruption. If utility/ food becomes disrupted locally, then worth having a bit of backup yourself. You may be able to help out more vulnerable neighbours around you aswell if you have some extra.

There is also the possibility of having to self quarantine for what looks like at least 14 days so you don’t spread to others.

Btw. doctors usually wear a mask not to protect themselves, but instead not harming the sick people with their bacterias and viruses additionally, e.g. while an operation and opened bodies.

This then should at least reduce risk from asymptomatic mask wearing carriers spreading to others, including secondary bacteria/ flus/colds that could tax the immune system in parallel.

Mask wearing may also be a good reminder to stop touching your face and a nudge to keep washing your hands, particularly for children.

There’s no preparing for worst case scenarios, but there is stuff you can think ahead about if things are not running as normal for a while.