this would be great if you could use other pattern effect commands besides the vol/pan/surroundin the master track and have it affect every track in the pattern on that line.

here’s a mockup of a delay letting you put groove on the whole pattern instead of the old-school bpm/lpb change trick. I was thinking send tracks also but that might get messy.
2441 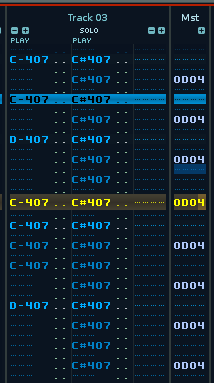 discourse:
It feels like command have been neglected in the later versions besides the 8 effect column increase.
hopefully the number of effects is raised (letters G-Z) for more effects and there’s plenty we could add that other trackers have.

please support my BX/0BXX in my signature. hope it’s in 2.8

i like that idea. i’ll take this opportunity to plug my own little ‘0Bxx’ variation feature request from some time ago: https://forum.renoise.com/t/reverse-with-without-envelopes/31700

i would like expansion of the pattern effect commands very much. i never use automation

this seems like a clever idea. i wonder when they’ll implement it. oh, yesterday, in 2.8. woo
someone needs to get cracking on a dBlue Glitch-like script for master efx mangling

could be improved though…

could be improved though…

not it by a long shot. doesn’t write pattern-effects on master. yeah, sure, it could go for grouped instruments etc, but i was only referring to the simplest and quickest iteration, which is to add and remove efx from master effect columns that affect the whole sound.

…not yet. Someone could hack it and upgrade it/make it to do so?

…not yet. Someone could hack it and upgrade it/make it to do so?