EDIT: Unfortunately one or more blank lines isn’t enough to fix this issue now but apparently occasionally it works… What appears to work is adding a dummy note as TheDamnChicken says below… I have also discovered that this is happening on other rows for example first note in a track on row 16 of the first pattern (maybe later patterns too?), I just noticed i have another synth not rendering even though it begins on row 16… this basically means I have to make dummy notes for everything to make sure in a busy mix, this is not great.

If you’re an long time user you likely already know what this is about from reading the headline and have probably experienced it too, in that case just skip to last paragraph for a suggestion to this problem.

Here’s the thing, I thought my mixing had turned a serious wrong turn on song, I couldn’t figure out why and what but it turns out Renoise suddenly started consistently not rendering out a subtle bassy synth (Spire1.1.17-x64) i had playing from the first line. It’s a subtle sound so it eluded me for a long time but the song sounded off and I couldn’t figure out what was wrong, out of frustration I booted up two versions of Renoise, loaded old and new versions of the song in each and figure it out one by one because I knew the render of the old was correct… so yeah eventually I figured it out and for some reason Renoise has stopped rendering out the first note of that track. Many of you would probably have spotted that the bassy synth was missing but I am getting too old to notice that or something like that

This issue has been happening forever with different synth plugins, it can be fixed it seems if you insert an empty one line pattern as the first thing, that’s a bloated hack though but something we will have to do to make it render out properly.

So I wonder if the bug can’t be found and fixed then how about Renoise insert such blank 1-line pattern in the background before rendering and then strip the silence from the rendered WAV, may that solve it?

I had something similar a while back - IIRC, it was down to Auto Suspend being on for that plugin. Depending on the render speed, I assumed that there wasn’t enough time to spin up the plugin and the first note was missed.

I have a dummy note before the track begins for that issue, as well as some odd reverb issue with valhalla shimmer, which “chirps” on the first note. Maybe its the same problem?

@TheDamnChicken Adding a dummy note before does indeed work, unfortunately it’s a long sound meaning I have to add a long non-sense beginning to let it play out completely. This is really something that need to be fixed, my song has 50 tracks and I need to add a lot of dummy notes to make sure everything is OK since my attention and memory has left building.

One thing I’ve been playing around with is the sending of some inert midi command to kick the plugin into life. Perhaps an additional line of investigation?

I think that’s just another way of sending a dummy note, but yeah, then you don’t have to have sound playing… but this bug really should be fix. Unfortunately Taktik can’t reproduce it so it’s hard to fix 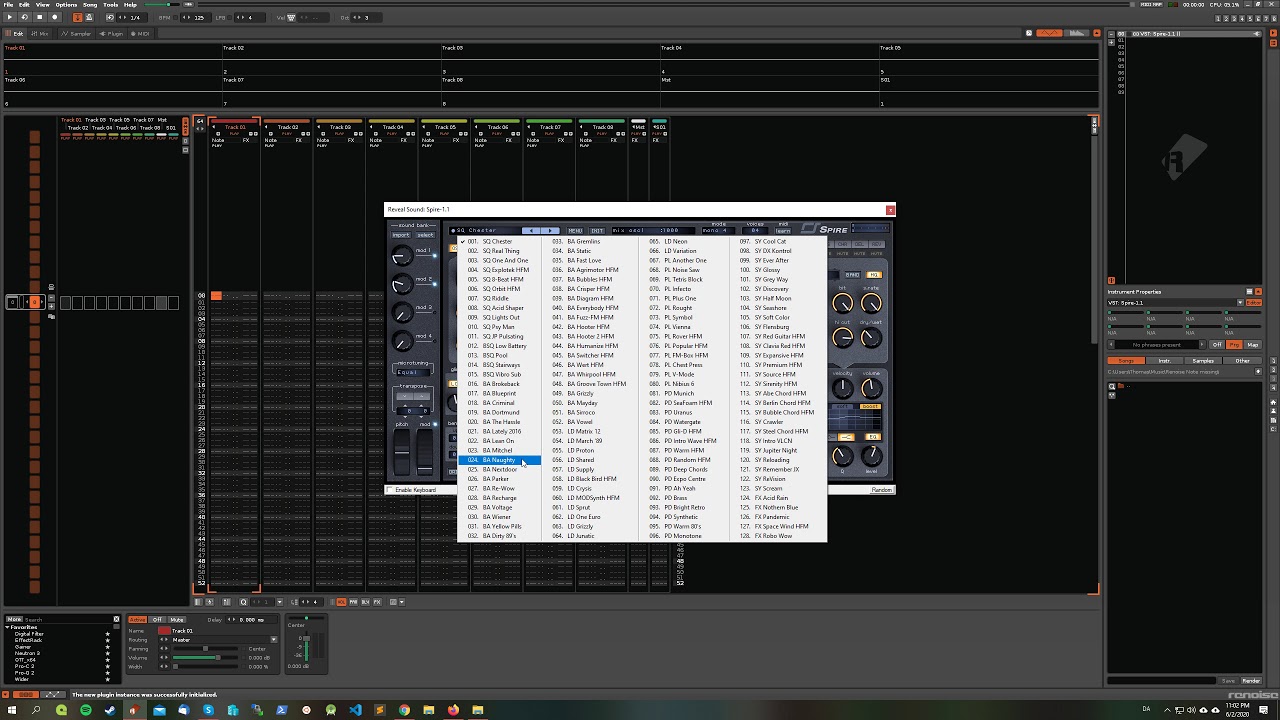 edit: So actually the first not is not missing it’s just cut off very quickly it seems.

I never observed missig notes, but sometimes when e.g. looping the first 16 lines the DSP load is quite high during the first loop. Then it goes down and stays lower.

I just don’t understand it plays fine from within Renoise but it’s different when rendered.

I will test this with some of my plugins. That’s really weird.

If you decrease the bpm is it the same?

You are right, it does not happen at 32 BPM.

Also this seems to be specific to Spire as I can’t find other plugins that does this, I remember that I used to have the same problem with NI Kontakt many years ago but not anymore.

Maybe test if it happens in another DAW and if so contact the devs.

I only have Cakewalk as other DAW and it doesn’t happen there when exporting to WAV.

Would be cool if someone else who own Spire can try it out.

Why do you think changing the BPM matter?

No concrete idea with the speed … it was more feeling, but of course that should not happen.
You could try with Reaper.

Taktik, if you read this, can you please look into why changing the BPM matters when exporting?

Right now I can’t use a WAV recorder as the CPU bogs down through play and stops, so I am left with making a dummy pattern with dummy notes, then cut that out afterwards which is obviously driving me crazy.

I haven’t heard back from Spire developers after they provided their checklist to go through, so I am at the point of giving up on Spire which is sad as it’s one of my best sounding plugins.