I have been using Renoise for a while now and used the completely stand-alone which worked great. Now I have bought Omnisphere and run it as a VST plugin and plugin alias. Even if it’s a little cumbersome, it works perfectly fine. The problems I have ended up with is that the Omnisphere sounds starts to crack and rattle after I have used them for a while in Renoise. This issue (or smular) is described in another thread from 2008 Omnisphere. I have tested the solution proposed there but I still have the same problem. Is there a solution to this? I think it’s really strange that the same problem would remain 12 years later !? My second problem arises when I render a song to disk. If I choose offline mode and interpolation HQ, the sounds coming from Omnisphere don’t sync with the playback or with samples that I run directly in Renoise. Is there a way around this? I am using Renoise 3.3.1 and the latest version of Omnisphere (2.6.5.d). My computer is a Windows 10 machine with a Core ™ i7-7660U processor.

Any ideas or solutions?

My second problem arises when I render a song to disk. If I choose offline mode and interpolation HQ, the sounds coming from Omnisphere don’t sync with the playback or with samples that I run directly in Renoise.

Don’t render in offline modus, especially if you have many effects like delay or similar ones in use. Rendering offline often causes that instruments and effects are not synced. If you render in realtime all the sync problems should be gone.

The problems I have ended up with is that the Omnisphere sounds starts to crack and rattle after I have used them for a while in Renoise.

I also got Omnisphere but to this point I haven’t had such problems yet, maybe because until now I haven’t used Omnisphere that often. When did it start to crackle, after which period of time? What do you mean with “for a while”? It crackles after 1 hour,. 2 hours, 3 hours in every music session? Or does it generally crackle if you’re using Omnisphere because you already used it for weeks, months or years?

Maybe it would have been clear there. It starts almost immediately. So we talk more about minutes rather than hours and it happens all the time, not just sometimes.

Check “Auto suspend plugin when silent”, which is not checked by default: 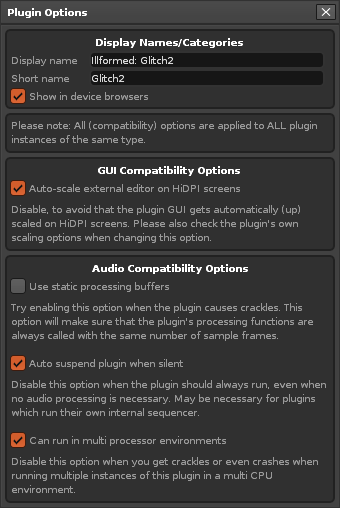 If this doesn’t help I don’t know.how I can help.
Did rendering in realtime help in terms of your sync problem?

Maybe it would also be helpful for the potential helpers out there if you would tell us which version of Omnisphere you have. Maybe there are differences in handling.

Hey, thanks!! Actually I think the “Use static processing buffer” is the solution to this problem. If you read the text below it actually mentions the crackles.

So one issue hopefully solved.

Did you have any idea about the rendering to disk problem?

I revert my earlier response. I still have the problem.

Did you also checked “Auto suspend plugin when silent”?
And what version of Omnisphere and Renoise do you have?
Personally I’ve got Omnisphere 2.6 and no problems until now. If I also should get these kind of problems in future I will post it here.

Did you have any idea about the rendering to disk problem?

As I already said, render in realtime.

Yes, I have tested the Auto suspend plugin when silent. To render realtime is an option, but I would like to render in higher quality.

Thank you for helping out

To render realtime is an option, but I would like to render in higher quality.

Rendering in realtime doesn’t mean that you can’t render in higher quality!
Change the bit depth as you wish before starting the rendering process.

Thank you for helping out

You’re welcome!
I see now, you probably want to change the interpolation to HQ, right? Indeed this isn’t possible.But if I understand it right changing the interpolation only affects samples. So if you’re using mostly VSTs and there’s a chance that rendering in realtime can solve your sync problems, I would check it out.

Alright, I would see this issue as closed, but not really solved. I think I have touched all configuration possibilities in Renoise for plugin’s. If any person working with Renoise reads this I would say that you guys needs to work with some refactoring of the UX/UI regarding plugin’s. The configurations are spread out all over the place.

Anyway. thanks again @TNT for your support here, even though my problem still persists. The crackling sound is still a problem while composing but it has decreased. Nevertheless I have managed to complete a tune using Omnisphere with Renoise A Couple Of Switch by E.T. Marillion | Free Listening on SoundCloud which feels great.

Ok, no crackling within the tune. That means the crackling is there while composing, but after rendering the song it’s magically gone? So you have to picture the crackling away while composing and can get a good result, even though the crackling still is there? What about contacting the Spectrasonics Customer Support? There must be a solution for this. Obviously you’re not the only one who has those problems.
info@spectrasonics.net

I wonder why I don’t have those kind of problems yet. I’m also running Win10, Renoise 3.3.1 and Omnisphere 2.6. And I also got Intel inside, but a different processor…

I’m curious: When did it start to crackle? It didn’t start from the very beginning after the purchase, right? I just want to be prepared if I also would get those problems.

Yes, it happens when I’m composing and especially when I start and stop often and test out e.g. different lead combinations. it’s like the instruments start to commingle as reverb still lingers on when i restart the track again. It’s is cool that the reverb and other effects lingers after the playout has stopped, but maybe it had been better to just mute and stop all sounds clean when the playout is stopps.

It started directly when I started using it. Installed it Monday this week.