You know, I don’t really use the metronome. Not because it’s not useful, especially when you set the Beats per Bar and Lines per Beat to what you like either in the key-preferences or through [scripting](

[quote=“Cas”]
What do you mean?
[/quote]
), but all in all, it doesn’t get much use, because it is so infernally loud.
Thankfully the forum members were kind enough to tell me what to do, i.e. alter the Metronome.wav in Skins/ folder. But.

having no control on a RMS -8.8dB sound is um. cruel, for those with a nervous disposition.
While this:

solves the issue for me - each and every new beta or version, I’ll have to either re-do the volume change or copy the metronome.wav in there again. one day i’ll forget, and then I’ll go OW and stop using metronome again.

it really feels like the preferences in Renoise could have a volume slider for controlling how loud the sound is.
please could we have it

I would also really like to have the ability to specify the a delay amount for the reason mentioned here:

Ok, I know this won’t fly because it probably breaks the underlying architecture and backwards compatability, but what about having delay offsets positively and negatively centered on the note? Why does this matter? It makes more sense from a musical standpoint. The pulse of the beat is at the core of any rhythm, but the delay offsets as they are now have an asymmetric relationship to that. This will tend to “nudge” the composition process in ways that are not musical. For example, if I’m addi…


Seems like a small issue, but it gets really tedious having to edit notes from the first beat across 2 patterns (often necessary to time the attack phase of a downbeat properly)
Foo (mr_mark_dollin) April 2, 2012, 10:00pm #3

Yes! It’s been requested before, but there’s still a need for it.

I would like to note that a tool can probably be written to load the metronome sample and adjust it, but i cannot make such note because this is too much a ‘native setting’ thing. Bam. Inverse tool speculation.

The metronome is extremely loud on my system as well and I don’t use it for the same reason. It would be nice with a volume control.

I use it only in precount mode, every once in a while. I also changed the ` or ~ shortcut to switch chord mode

. Anyway, you people are right and it wouldn’t be stupid to have a slider for it. But if it’s in the prefs, maybe just a low-mid-high level selector or something, I would not like to see something in prefs pane where you first have to go hit start to monitor, and adjust the value in the prefs…
Ooh a better idea: just hide the slider… then if you scroll on the metronome button the level changes
Also I like that it’s still a sample that it can be replaced. Very cool. I’d love to have it count “one two three four” though

I had another idea. I would like a second keyboard shortcut like RShift, start to record in pattern, but one explicitly with precount and one without.

Will this be in the next release of Renoise?

Will this be in the next release of Renoise?

We do now know that since features are not announced beforehand

Personally I think the Metronome in general could use an overhaul. I feel like it’s just not intuitive at all to use. I think the way Renoise deals with time signatures just doesn’t make sense. It should be more straight forward. This probably has a lot to do with the fact that I play with a metronome all day and am used to reading music. I guess though that that could just be a different in the way a tracker views time versus a traditional DAW? And I agree, it’s totally loud. I think maybe some parameters that you could control straight from the GUI without having to program it in the tracker would be useful. Like a general click settings which would include volume and time signature? I’m not sure how to explain it.

What about metronome being native effect/instrumet? We love how it sounds so we could make click track and monitor it the way we want to headphones or drum bus! Time singnature could override song settings so highlighted lines will match.

that reminds me also that every time i wanna change the time signature, I also have to go into the preferences and set the bpm count accordingly. it’d be nice if the global control had the option to change the time sig and have the metronome match with it

This is another of these topics much discussed in the forums. Everyone asking for a metronome review. At least include a dedicated volume bar. But there are really 100% ignored topics. This seems to be one of them.

Ideally, it should be integrated into the Song / Song Options panel:

Currently, you can change the Metronome.wav file manually in the container folder. But that is not practical!

Currently, you can change the volume of the metronome, changing its value in the XML file <MetronomeVolume>value</MetronomeVolume> inside Config.xml. But this is not practical!

In both cases, you need to even restart Renoise. 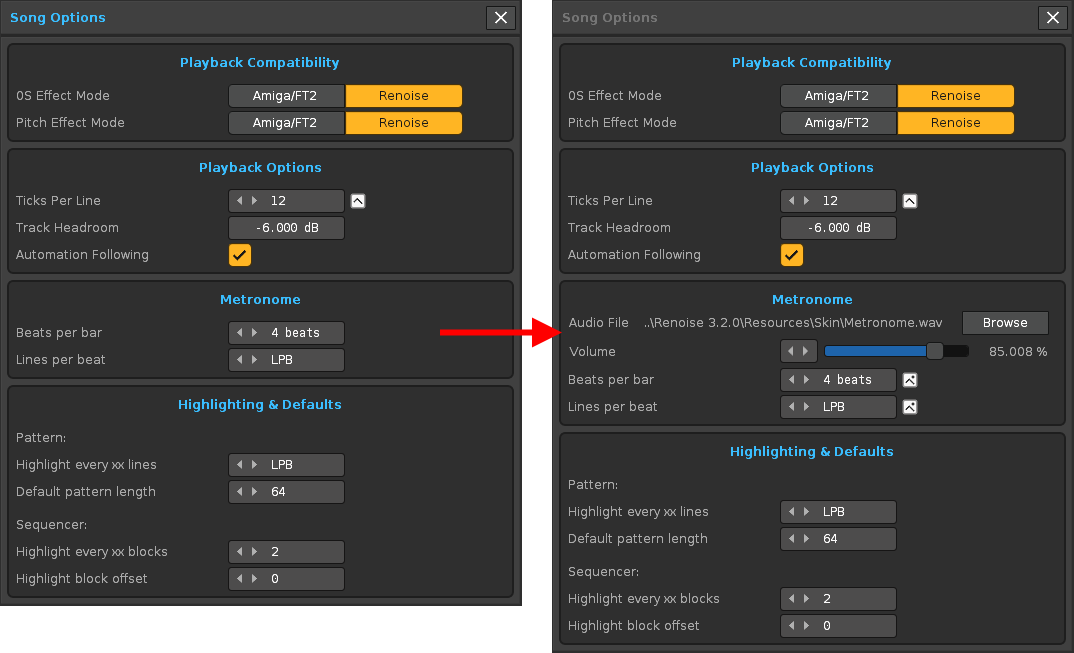 Alternatively, Studio One does it in a very clean and user friendly way by adding a small expandable fader on the master track.

can a renoise tool somehow tweak the volume of these things destructively? could such a thing be possible?

No, the volume value is in an XML file that is only read when loading renoise for the first time. There is nothing related in the API either.

hmm. could a script modify the volume, quit the app and then the user could restart the app?

It is easier to do the following:

By default the value is higher. I lowered it to my liking.

This matter is so dumb that it is surprising that taktik does not implement it. I understand that the config.xml file is saved when you close Renoise. This prevents using a script, and it is absurd to build a script that needs to close Renoise. This is simply not well designed to change the value while Renoise is open.