there is a new version 3.1 3.11 of the Step Sequencer “Lauflicht” available. First of all, thank you for the great support, your motivation, new ideas and bug reports. I would be happy if you continue sharing your opinion in this thread.

The greatest new features are the pattern load and mix mode and the support of multiple Launchpads.

(3.11) improvement: improved performance when loading new pattern data into the gui (e.g. on pattern change), it is about 4 times faster now (or even better).

(3.11) fixed bug: when midi instruments were assigned to a track, the selected midi channel was reset to channel 1 when changing the edit step or selecting another page.

Is the newest “Launchpad S” being supported? Mine is sending and receiving MIDI like normal, but doesn’t seem to be recognized by lauflicht.

Is the newest “Launchpad S” being supported? Mine is sending and receiving MIDI like normal, but doesn’t seem to be recognized by lauflicht.

It should be, they have not changed anything in the Midi-implementation side, as far as I know. I have sent you a private mail.

After installing Renoise 2.8.1 (64-bit) everything is working all right with “Launchpad S”. I’m having lots of fun trying out the demo version atm

Thanks for helping, Cie.

This is awesome, thank you very much for your feedback!

One question - I’d like to be able to jam on the sequencer and have everything recorded into renoise over time, not just 1 pattern repeated, and not just capture the performance to audio.

So a full history of the session recorded into patterns, any ideas?

I looked at the clone pattern tool in tandem with the sequencer but not quite there yet.

(edit: don’t worry, I’ve hacked the clone tool to do this, needs more testing but appears to work on the surface)

This is an interesting idea.
Generally, the step sequencer loads the new pattern into the step sequencer view on every pattern change. So maybe this helps; you could prepare a sequence of patterns and then play this sequence; the edited steps should be recorded then to the current playing pattern.

Maybe you can also have a look at another tool “Live Dive”, which does exactly what you want, but only track-wise; you can not edit the steps there on the fly like in the step sequencer, but only switch on/off tracks and record this to a new song.

/>/> when I map my nanokontrol to instrument note in the control matrix, the sequencer & then renoise crashes(twiddle the dial and things slow up until…)

Do you have tried to disable Automap?

I have also two Nanokontrols2 and Launchpads, and using them simultaniously without any problems.
@LamptonWorm: I try to recreate it later this day, could you please pm me some details on how do you set it up?

@cie…yes, happens whether automap is installed or not…

/>/>/>/> when I map my nanokontrol to instrument note in the control matrix, the sequencer & then renoise crashes(twiddle the dial and things slow up until…)

Thank you for sending me a pm with detailed information.
I could recreate it. The faster you dial the knob of the nanocontrol2, the slower Renoise responses.
It is a performance problem in Renoise setting a new note; you have to imagine when dialing the knob fast up and down, the controller sends about 30-40 midi message in one second to the plugin, which then sets 30-40 times a second a new note in that step. This makes Renoise slow (in my case Renoise does not crash, it depends on the available cpu power), because it reads everytime the given line of the pattern and than writes the new note to the given line again.
An interesting thing is, when I am using the Midi-Controller “Pocket Dial” from Doepfer, it does not get slow, because the dials have a snap and lock every midi-cc, so it does not send so many midi commands per second.
So this problem will not happen with every midi controller.

However, I have improved the performance in this part of code vastly, rewritten some part of the affected code, and created a cache which remembers the previously changed step additionally.

So this should solve the problem and I have uploaded a new version 3.04.

Cie, thanks for the prompt support and solution 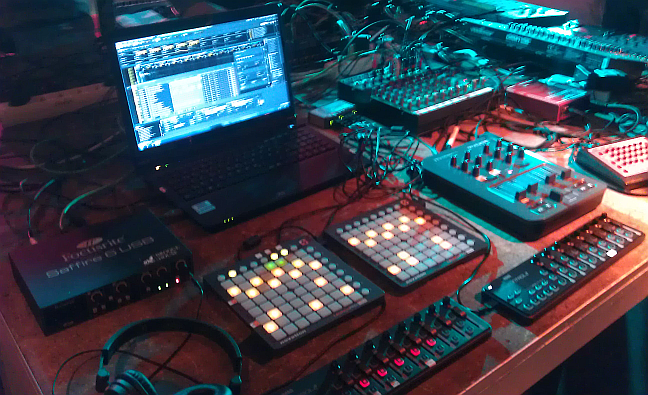 New version of StepSequencer Lauflicht was live approved with Renoise3 b8 and two Launchpads Mini at Mülheimer Nacht in Cologne.

New version for R3 will be available soon.

New version of StepSequencer Lauflicht was live approved with Renoise3 b8 and two Launchpads Mini at Mülheimer Nacht in Cologne.

New version for R3 will be available soon.

Would it be possible paste steps into a phrases?