I think you should rename “Ed.” to “Auto open” because what does Ed. stand for?

It would be nice have it show the favorites on top of the list at first so you can quickly arrow down to your favorite plugin after invokation.

For the search VST Plugin can you create a “Make slot” checkbox beside “Ed.” so that it by default make a new empty slot automatically to put the instrument in?

This tool has become quite awesome!

The Ed. stands for External Editor. This was just named as a shorthand for the API naming of the property but yes, could be a bit clearer, at least with a tooltip for explaination.

RE. the ‘Make Slot’, there was a button for this in the 1.7 and lower versions, that hilighted when you were going to overwrite an instrument, clicking would create a new slot. This will be added back fairly soon.

It’s getting to the point where I may need to add a separate options dialog, so adding stuff like favorites could make it in there too. There’s another couple of things that could maybe do with an option aswell.

Note: you can use these or up down arrows before any search, to browse all plugs at once.

Just found a few quirks in the regular expression matching:

Searching for “kontakt” give two choices which appears fine as I for some reason have both VST2 and VST3 installed but both open the VST2 version of the plugin.
I noticed that when I right click on an instrument slot and “Load VST3…” then check the Only show unique VST3 plugins that Kontakt then disappear there, maybe this is somehow related?

Beginning a search with “a” shows “Analog Lab V” twice despite I only have the VST3 installed, as soon as I write “an” only one choice is shown. (I have Arturia Analog Lab V intro installed).

both open the VST2 version of the plugin

Yes, caught this one before, will probably be adding some pre/postfix when a plug us doubled, and then choosing the VST3 plug should load that correct one

then check the Only show unique VST3 plugins that Kontakt then disappear there, maybe this is somehow related

This sounds like it’s working ok as that option filters anything already available as VST 2.4 in your plug folder. i.e. you only want to use the VST3 that are not available as 2.4 anymore. Some devs seem to like to force install VST3 on top of the 2.4 – bit of a mess being between the two standards.

missed this but have managed to replicate. I suspect it has something to do with a string.sub that’s still in there which doesn’t allow for plain text operation and runs into Lua ‘Magic Characters’ again. Hopefully shouldn’t be too hard to fix if it is that

EDIT: think I found it, the search is matching the first A for the top entries (which always start with the search letter). There is a second match that looks in the rest of all the plug names. Just need to filter the already added ones.

I wish you good luck if you try figure this out

Thanks! it’s a pain but will be good to have working properly!

known issue labeling and loading of doubled plugs in different formats like VST2.4 vs VST3 still not supported, but this version could do with a bit of testing for the basics as I needed to re-structure a lot of stuff.

The new instrument slot button will still return later too.

All current updates are to the search boxes with these shortcuts 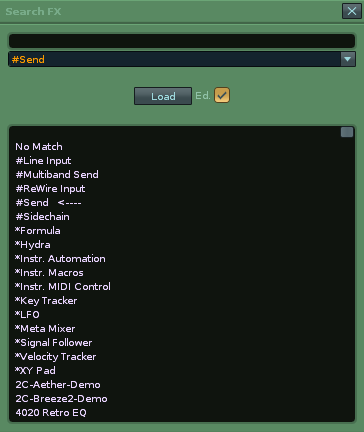 Nice! Not sure if Renoise is causing this as it just crashed prior to installing your tool but it crash when clicking Load!?

Thanks, I always seem to forget to test the load button as I’m usually using return for load.

It got broken as had to rescope everything in restructuring. Was just a prefix missing on the function there.

Great. I’ve bound SHIFT+’ to search instruments and CTRL+’ to search FX and it works so nice and quick.

I look forward to the make slot feature, hope you can make it automatically make a new slot, maybe only if the currently selected instrument slot isn’t empty?

Thanks, I always seem to forget to test the load button as I’m usually using return for load.

It’s appreciated, I guess someone may click it one day!

hope you can make it automatically make a new slot, maybe only if the currently selected instrument slot isn’t empty?

Yes this shouldn’t be difficult to have as an option.

Also plan to add a random button/ shortcut to suggest a random plug from the results readout. Already got the main function done for that from Random Plug. So hopefully not to much drama to adapt it in.

The core functionality of the search seems to be more or less nailed down now at least. Just the VST3 thing to sort out and a couple of things for polish I want to try too.

All current updates are to the search boxes with these shortcuts

I have a few tweak ideas:

But it works great, I’m using it all the time!

I did tryout having VST3 on doubles only but it could be a bit confusing for people unaware. Probably something that could be optioned. I guess the doubling clash issue is not just limited to VSTs aswell and other formats on Mac and Linux could have the same thing. So really need to make an option/s that covers all of those cases.

re: the insert slot, is added at the end as if you have a large song with multiple instruments, adding higher up in the list can cause a bit of slowdown in renoise, as it has to re-assign a lot of pattern notes to new instruments. Again something that could be optioned though.

For now I’m just leaving as-is for a bit, just to make sure no more bugs appear in core search.

This tool is awesome

I did however get a crash report fairly quick after trying it.

Tools/ledger.scripts.VstiFromMenu.xrnx/main.lua’ failed in one of its notifiers.
Please contact the author (Ledger) for assistance…

Hope you can solve it

Thanks for the report Dale, should be fixed in 1.84 here. Let me know if any further issues:

Thank you mr Ledger! So far so good

One question i have… is that I can EDIT the names that appear in the lists on the screen. Is that a feature? or a bug? or just ‘the way it is’ due to some limitation. ? Thank you

is that I can EDIT the names that appear in the lists on the screen. Is that a feature? or a bug? or just ‘the way it is’ due to some limitation. ?

It’s a limitation of using a textfield for a readout, so generally just avoid editing it. If you do by mistake then just re-click on the titlebar of the tool and continue a search/ delete operation and the results should be restored .

I am getting crashes with this version of vsti from menu, and also strange GUI behaviour which rectified itself open restarting machine, perhaps you would like a log? I like its new format though and its such a useful addition to workflow, there are other things I would change if I could as well, such as not having it remember the last called upon plugin, but perhaps others find that change useful, bit like reaper, great work on this highly useful tool, looking forwards to it being more stable

I am getting crashes with this version of vsti from menu, and also strange GUI behaviour which rectified itself open restarting machine, perhaps you would like a log?

Hi James, this sounds like it could be more to do with the API/ renoise. Is it possible to reproduce or only happens once after tool is first installed?

If you post a log I can have a look, but if it is a one off thing it may need taktik to get to the bottom of it.

such as not having it remember the last called upon plugin,

Yes this may be added as an option in a later version. If you want to clear the old search currently you can use ‘Delete’ or ‘Ctrl + Backspace’ for full clearance when reopening the tool.