Hello,
I’m probably getting some type of ADHD (it’s not a new type of envelope), but lately I can’t stand one thing and finish it properly.
I will probably return to them gradually,
but I have to release Rezonator in the pre version and focus on something else for a while.

Resonator is my attempt to implement the Karplus-Strong algorithm
and create a simulation of string instruments.
So far, it contains the creation of individual sounds
and minimal creation of chords.

The control is rough yet but can be quickly understood.
The main one is to choose in the settings which sample you want to generate.
If only a single string or entire chord sound. 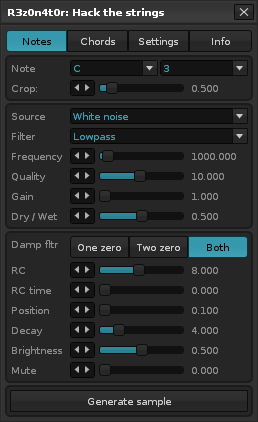 thanks, hoping to dig in. could you also mention in future posts where these scripts are accessed from - they’re not in Tools but seem to be in Sample Editor right-click on waveform

also could you add “create new instrument” instead of destructively wreck current sample as an option?

Definitely going to try this! Looks like a lot of fun!