I recently switched to Linux Mint from macOS and love it so far. The only program giving me real trouble is renoise.

I’m able to install and launch renoise, ALSA successfully detects my audio card and creates an ALSA RT thread. When I press play no audio comes out of either my headphones or laptop speakers. The audio output is set to hw:1,0 (CS4208 Analog). I don’t have the same problem on Mixxx which leads me to believe it’s not an ALSA issue. I also tried setting the audio output to 3+4 instead of 1+2 which I saw on another thread but it did not work.

Is there anything else I can try to get my sound working?

One thing to check: Launch Renoise and put some demo song playing. Open up Terminal and write “alsamixer” then press ENTER. Make sure that you have the correct sound card selected in the mixer. You can change this by pressing F6.

The mixer should show volume levels individually for speakers, headphones etc. Make sure that the appropriate outputs have been raised in volume and adjust the levels by using the arrow keys.

This did it for me when I started out with Renoise in Linux Mint Xfce.

I tried that and everything at least looks correct. Screenshot here

I also don’t see anything that looks off in the log (as far as I can tell):

Some more info if it’s helpful: I tried using fuser to see which programs are using sound devices when I run renoise vs when I run mixxx and this was the results:

As far as I can tell they are leveraging ALSA in the same way, but one produces sound find and the other does not.

Also, here is my audio setup in renoise: 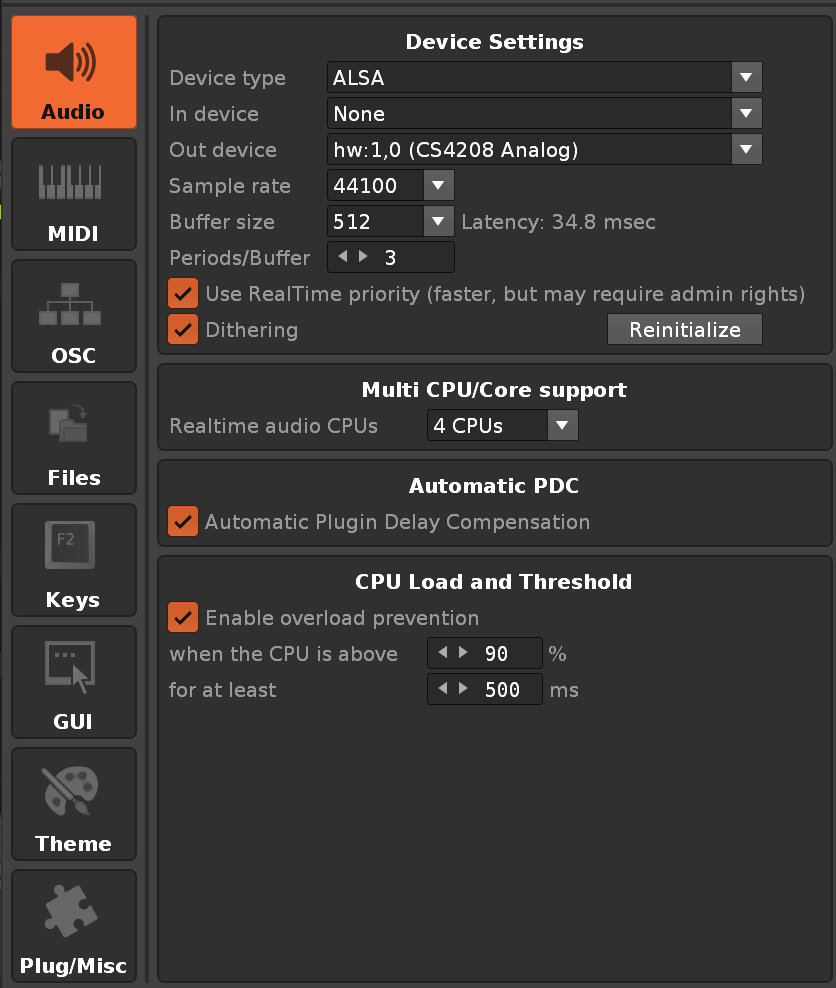 Could it be that some other application (e.g. your browser) is blocking your soundcard?
Did you try Jack with Renoise?

I don’t think so because I close everything before opening renoise. What’s the best way to check?

And yes my next move is to try using Jack, I just haven’t used it before so need to learn it. I was hoping ALSA would work since I’ve used it with Mixxx before with no problem.

An update, I tried with Jack and am still having the same issue. I also tried doing a fresh install of Linux Mint just in case I broke something while messing around with kxstudio packages, however I’m still not getting sound.

For both ALSA and Jack, Renoise happily starts up and starts playing (waveforms show, the mixer shows audio) but no sound comes out of my headphones or speakers.

I feel like I’m missing something incredibly simple but have not idea what it is. Is there anything else I can check?

From your screenshot of the alsamixer it looks like the Headphone output is mutet (MM). Try to unmute it with “m” key. Have you done the right connections when using jack?

Just tried and the result is the same (Renoise looks like it’s playing but no audio. I did notice after running pulseaudio -k that it was turning back on (the speaker icon in the tray disappeared and then reappeared), so I tried a different set of commands to totally turn pulseaudio off using systemctl but still no audio through alsa with Renoise.

Anything else I can try?

Just tried that as well and no dice, also tried unmuting everything and setting it to 100 (except for Master at 50) with my headphones unplugged and nothing.

For Jack, I don’t know enough to be sure. I installed qjackctl, set the interface to be the PCH analog audio card, then started Jack and opened Renoise and tried playing a demo song. The connections window looks like this: 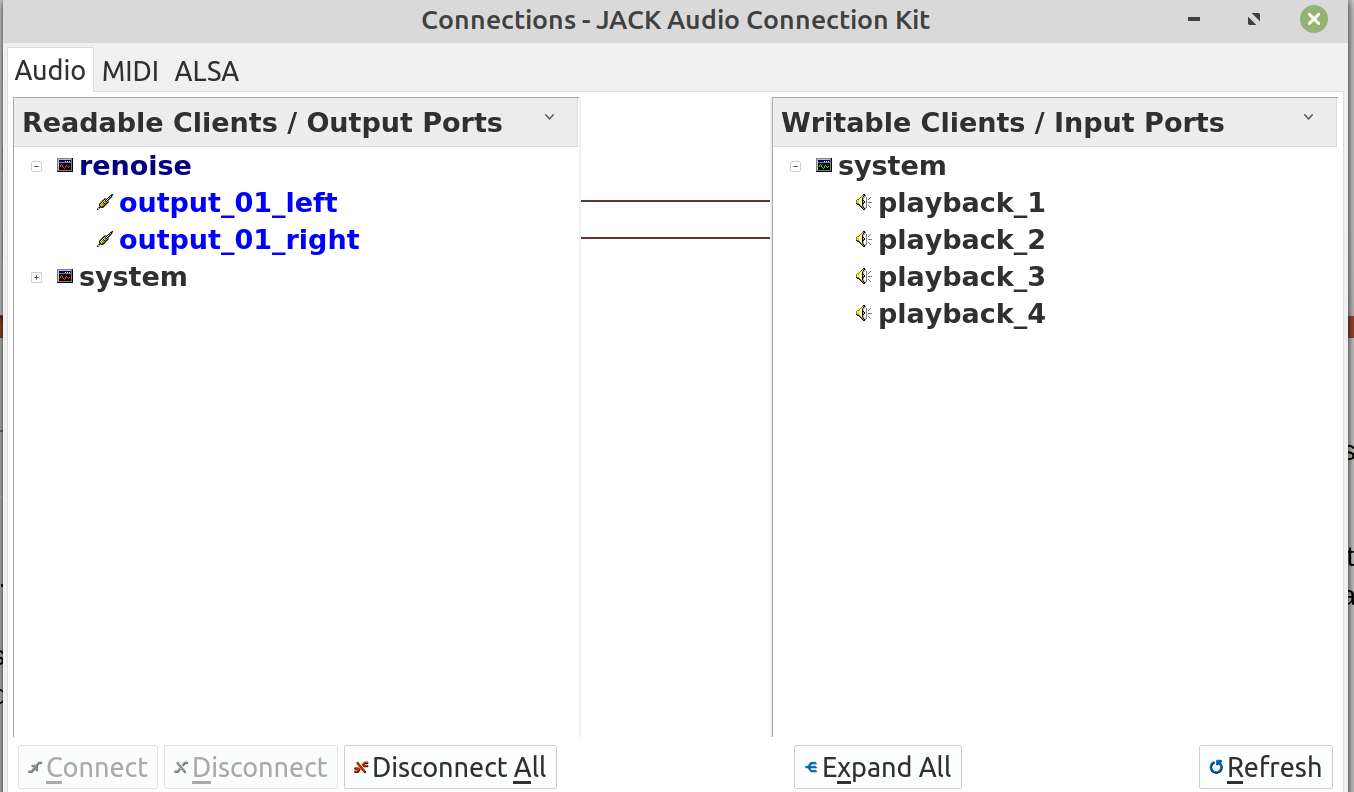 This looks fine. Now try the same with any other DAW (Reaper, SunVox, etc.)

Okay possibly getting somewhere: I installed Reaper and set up a dummy project with just an audio file. When running Jack I got the same issue as before (looks like it’s playing but with no sound), however when I switched back to alsa the audio worked fine.

I can try to mess around with the Jack settings to see if I can get it to work for Reaper, and once that works try Renoise again.

Although is there any reason why alsa would work on Reaper but not Renoise? I’m going crazy here.

I’m sure it is something as simple as a config file messing with the sound output. OK for a basic test that you can actually play something directly through Alsa run this command from the terminal

You should hopefully hear some white noise playing and have no complaints in the terminal.

EDIT; try playing a stereo audio file that you already have on your computer instead as I’ve just noticed that aplay can be finicky about playing mono files sometimes for me.

You seem quite proficient using the commandline, but just incase… for example if you have .wav files in your Music folder, to play the 1st 1 in alphabetical order, the command could be

Just out of curiosity and I’m sure you did , but just to be sure, you did setup the realtime audio priveledges on your system , iirc you edit a file /etc/security/limits.conf or equivelant ? I think Renoise would have probably failed if you hadn’t this set up correctly when you have chosen the ‘Use realtime Priorrity’ option as can be seen in your settings.

Hey mikobuntu, thanks yes I think it’s something simple as well just not sure what!

Confirming that I can play an audio file using aplay -D hw:1,0 though only when pointing at an existing file on my system. Trying to play /usr/share/sounds/alsa/Noise.wav doesn’t work and says “Channels count non available”.

And yes, I set up the limits.conf file though possibly incorrectly. Here’s a screenshot of where I appended the two lines from the Renoise Linux faq: 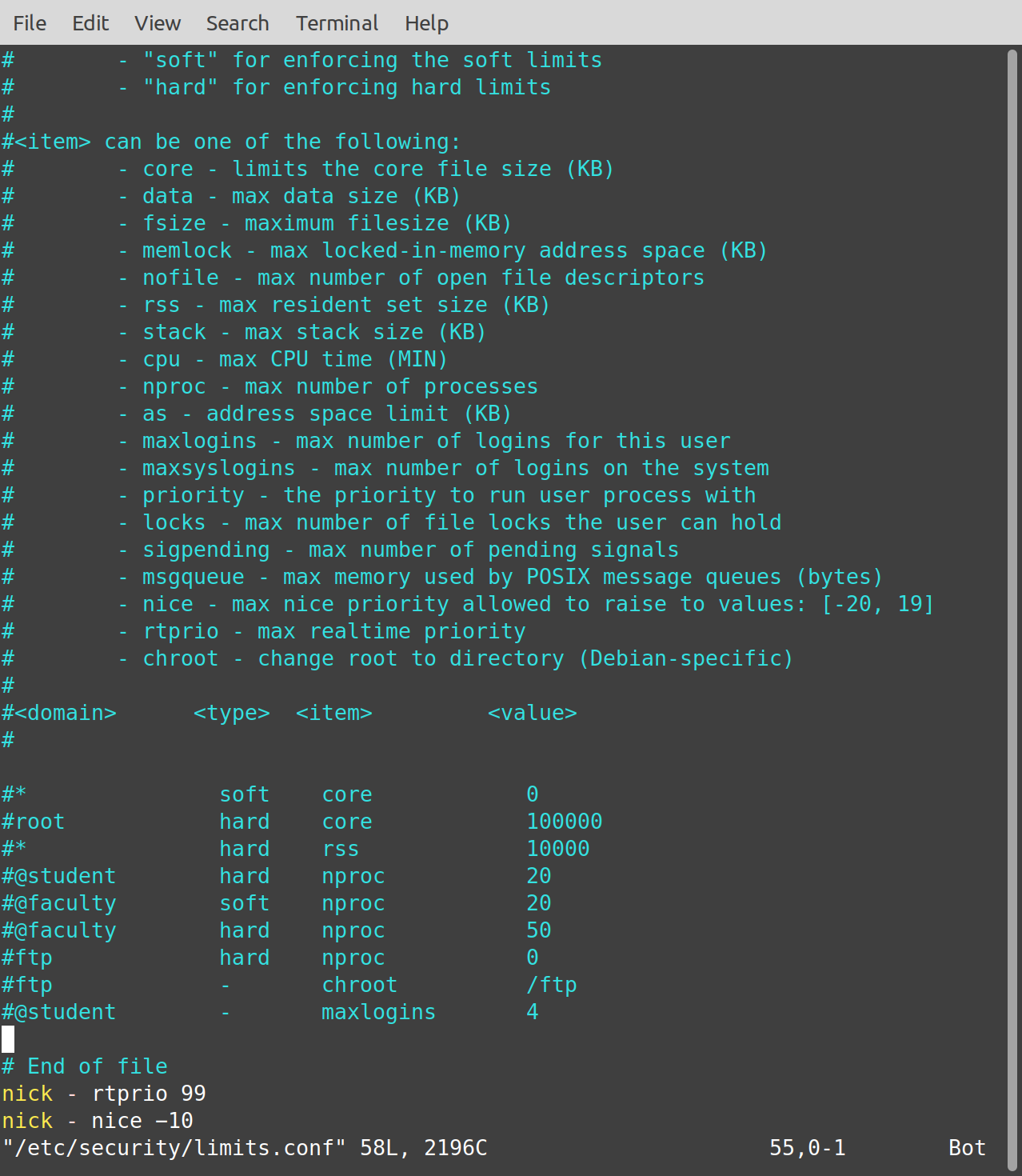 Well this is a good sign that your Soundcard is able to play audio directly through ALSA.

In the meantime , I’ve noticed a recommended setting that you don’t have in your /etc/security/limits.conf file append nick - memlock unlimited just below your nick - nice -10 save and reboot, try Renoise again and hopefully you are good to go. I can Remember Ardour needs the memlock setting or it wont run, so hopefully this is is the case here?

Oh can you also please paste the output of the following command:-

I don’t think this is needed, but it’s worth trying.

If it dosn’t work I would run the realtimeconfigscript next.