Routing in Addictive Drums 2 - How?

Look for the little down arrow in the mixer pane in addictive drums under each it. Click it and a small menu will pop up. Select the -> Seperate Output option. You will have to check “Enable Keyboard” on the bottom of the plug-in in Renoise. 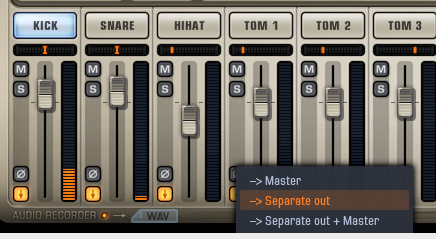 Then flip to the Plug-In pane if you aren’t already and manually assign the outputs like any multichannel instrument. Assign them to specific tracks instead of the default “Current Track” if you want them in one place. 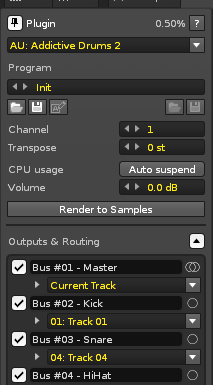 That should do it.

Tip. If you want to fully control the drums, turn down the OH and Room volumes so that they don’t interfere with the signal. Then add your own processes to the dry sound.

Okay, my plugin panel looks totally different… And as you can see from the screenshot I have always two drum kit pieces on each bus (Bus#2 - Kick/Snare, Bus#3 - Hihat/Tom 1 etc.). I can’t seem to find out how to separate the kick and snare and all the others into a separate tracks…

Okay, my plugin panel looks totally different… And as you can see from the screenshot I have always two drum kit pieces on each bus (Bus#2 - Kick/Snare, Bus#3 - Hihat/Tom 1 etc.). I can’t seem to find out how to separate the kick and snare and all the others into a separate tracks…

Must be using an older version of Renoise.

Anyhoo, That’s what the checkbox is for. Check it to enable.

Anybody?! I’m out of ideas here… I’ve tried everything.

I see what you are saying now. Is that the only vst of that aplug on your system? If so, what about an update?

Even though Addictive Drums has 10 channels for each of the individual drum sounds, it appears that the VST plugin version is combining them into 5 paired stereo outputs, rather than 10 individual mono outputs.

Based on Legendary Taunt’s screenshot, it appears that the AU plugin version is working normally, and does in fact provide the correct mono outputs.

I have other VST plugins such as Audiorealism ADM drum machine which do correctly provide individual mono outputs, so this is not a limitation of the VST plugin format itself.

Perhaps there’s an alternate VST version of Additive Drums which provides mono outputs instead? Perhaps it can be configured somewhere within the plugin?

Otherwise, it may be a bug with the VST version of Addictive Drums. Perhaps they are not declaring the output configuration correctly, or perhaps we’re not reading something correctly (although it does seem to work with other VST plugins, as I’ve mentioned). Difficult to say without testing the plugin ourselves.

Have you tried to contact XLN Audio directly to get support from them?

I just emailed XLN Audio about this. Let see they can figure something out…

Swapped over to my vst of AD and I saw the same stereo outs. Quite silly actually.

Shit. So no change to get this working properly…

It’s the way they coded the plugin man. I’ve even checked the internal settings. There is no way to split stereo to mono outputs inside AD. One thing you could do, is say, you have some drums playing, is to pause AD and it will create a wav file. Just take that way file and drag into the instrument section. Then chop that up and you can separate the kick drums and snares, etc that way. Just gotta remap the programmed pattern to the new sounds.

Made a video illustrating this.

Don’t know how to embed a video here. Sorry.

Nice! Thanks a lot! Gonna try that later.

Vid looks good. You can also use dblue’s slices to pattern tool for sequencing the hits in one click after chopping them up.

Vid looks good. You can also use dblue’s slices to pattern tool for sequencing the hits in one click after chopping them up.

Nice one. Adding that to the workflow.

Nevermind, I am on a new drum module now so I won’t get stuck in the mud on this issue.

I am in the same boat, VST will not route single drums to separate channels.

This is my prime plugin and I might need to figure out how to get this to work to stick with Renoise.

It looks like Legendary Taunt had it working. Any chance you can give me a leg up LT?

I have the plugin running in standalone like you do but not sure how to get Renoise to see the routing.

Oh and dragging the samples out of it is not going to allow me to use the room and overhead channels which have ended up being really important.